What’s a Wisley? I hear you ask. It is a garden, a very large and excellent botanic garden in the heart of rural Surrey. It was also the locale for a very enjoyable Sunday afternoon stroll last weekend, preceded by a late night around Marilyn & Adam’s hospitable dining table with their guests from the village of Horsley, and followed by lunch on the terrace at The Anchor pub, beside a canal off the River Wey. With barges and a lock and ducks and all. The English finally celebrating the advent of Spring. Or at the very least, the promise of Spring.
Wisley is the home of the Royal Agricultural Society, and is one of the greatest gardens in the world, claiming over 25,000 types of plants. They have a saying at Wisley: “If it can grow at Wisley, then it can grow anywhere”, but actually when you think about it, that doesn’t sound too complimentary, so I’m not sure what they mean. But there it is in the guide book. The RAS, given its Royal Charter in 1809, has been at Wisley since 1904 on 60 acres donated for experimental gardening. They still do lots of experimenting there, and gardening education, and the raising of difficult-to-raise species.
On my visit, possibly the most exciting things were the swathes of daffodils everywhere, a myriad of varieties, springing up in formal flower beds, casually clumped under trees, and swooping up grassy hillsides. ‘Tis the time of the daffs. Hooray! 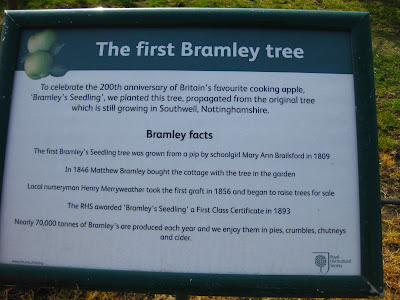 But venturing away from the formal gardens, we found a quite magnificent ‘pinetum’, as it was called, with magnificent specimens of tall trees. We explored a quiet bird hide down by a bend in the river, then wandered a path along the River Wey, dodging daffodils everywhere, and fetched up at an enormous glasshouse. Here were all the plants I knew the names of, including that garish orange thing that grows like a weed in my garden at home in Lindfield. Here were all the plants from Eastern Australia (me) and South Africa (Marilyn). We gave them a cursory nostalgic survey then headed on up “The Borders”, a hillside planted with what promises to be exciting combinations of herbaceous borders, but which have not yet quite sprung to life.
We arrived at the orchards – many fields of apple trees, and some quite amazing espaliered apples and pears. Then down through all kinds of berries and some model gardens...and look! There’s another hillside covered in daffodils!
We then toured the more exotic corners: alpine rock gardens, a Japanese garden complete with sakura - cherry blossom in full riotous bloom.  It was all blissfully springlike, and possible to strip daringly down to a mere t-shirt.
Tearing ourselves away from the greenery and the daffodils, we lobbed up at ‘The Anchor’, a pub whose founder was well briefed in the old adage ‘location, location, location’. Sited beside a canal which runs off the River Wey, with a moored barge to the right and a delightful humpback bridge and lock to the left, boats plying up and down, ducks getting frisky in a spring-like manner: ah, heaven! We snagged a table outdoors, heaved some happy sighs, and settled to a soporific late afternoon on the river. I knew everyone would be happy when the sun finally came out.
And now, obviously the Wordsworth must be quoted (written in 1815):
I wandered lonely as a cloud
That floats on high o'er vales and hills,
When all at once I saw a crowd,
A host, of golden daffodils;
Beside the lake, beneath the trees,
Fluttering and dancing in the breeze.

Continuous as the stars that shine
And twinkle on the milky way,
They stretched in never-ending line
Along the margin of a bay:
Ten thousand saw I at a glance,
Tossing their heads in sprightly dance.

The waves beside them danced; but they
Out-did the sparkling waves in glee:
A poet could not but be gay,
In such a jocund company:
I gazed---and gazed---but little thought
What wealth the show to me had brought:

For oft, when on my couch I lie
In vacant or in pensive mood,
They flash upon that inward eye
Which is the bliss of solitude;
And then my heart with pleasure fills,
And dances with the daffodils.
Posted by Annette Freeman at 11:43 PM

Email ThisBlogThis!Share to TwitterShare to FacebookShare to Pinterest
Labels: England