Colonial Times, Friday February 27, 1827:
“Benjamin Hyrons, Boot and Shoemaker, begs leave to acquaint his friends and the public, that he has opened an establishment in Liverpool Street, directly opposite to Mr Molloy’s, where he will still continue to carry on the above business in all its branches; where he has also on sale, a variety of leather, either wholesale or retail, at the lowest prices, consisting of sole leather, kip ditto, kangaroo skins, and basil. A quantity of clean washed wool for sale.”


Few convicts sent to the notorious Van Diemen’s Land made as much of their new life as did Ben Hyrons, transported in 1818 for passing counterfeit coins. The cottage he built in George Town, Tasmania, is my little haven in my home town - the oldest weatherboard structure still remaining in the town, dating back to the 1860s. Its old, creaking floorboards, the convict-brick fireplace and the “ghost in the attic” always make a stay at Ben Hyrons’ Cottage memorable. On my recent visit it was also a thrill to see the old garden cleared out of the weeds and trees that had almost taken over completely, revealing expanses of grass, a few fabulous old trees and lots of spaces for the bulbs and new plants to grow. A re-visit in the Spring seems a must.


Meanwhile, I also found that the local press “The Launceston Examiner” had recently published a supplement entitled “The Convicts of Van Diemen’s Land”, and amongst much interesting information about the days when ‘Tasmania’ was known as ‘Van Diemen’s Land’ was a biographical sketch of Ben Hyrons himself.


At the age of 20 Ben was sentenced to death for counterfeiting coins. He was born in Old Swinford, Worcester, England in 1795 and originally trained as a shoemaker. He married Amelia Baker in 1817 but just three weeks later they were both arrested for passing counterfeit currency. Ben escaped the gallows on a plea for mercy, but was transported for life to Van Diemen’s Land. Amelia was sent to New South Wales, and they were refused permission to reunite. Both ended up marrying other people. there’s probably an opera in that story somewhere. 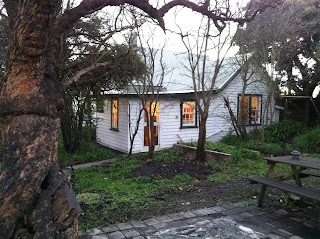 Ben Hyrons arrived in Hobart Town in 1818 and worked as a shoemaker. He was given his ticket-of-leave (a free pass, as it were, for convicts of good behaviour who had served seven years) in 1826, and - as the newspaper advertisement quoted above shows - opened his own little business the next year. He married Sophia Wood in 1829 and began acquiring property in New Norfolk and Hobart. As many newspaper advertisements of the period attest, he became quite a busy businessman, acquiring many enterprises and getting caught up in legal battles with defaulting tenants and business associates.
Ben was 35 years old when he was granted a conditional pardon.


He moved north to Launceston and became a publican. This, one assumes, was a profitable business in a far-flung colony full of soldiers and ticket-of-leave men. Sophia died soon after the move to Launceston, leaving Ben with two children; but he shortly married again to Mahala Hedditch, and innkeeper’s daughter. In 1833 he moved back to Hobart and became a food and wine merchant in Liverpool Street; and later built the Commercial Inn in Murray Street. He seems to have thereafter concentrated on pubs, and owned The Rising Sun Hotel and London Wine Vault in the south, and the London Tavern in the north. In 1845, Ben’s Angel Inn in Charles Street in Launceston became one of the first buildings in the town to have gas lighting.


In a factoid of which I was previously unaware, I learnt that Ben Hyrons also established the Royal Olympic Theatre in Launceston to host touring performing groups. The theatre is described as Launceston’s first.


And then came the coach runs: Ben established his first coach service between Launceston and Hobart in 1840 and later won the mail contract. However, this was a tough run - what takes two hours to drive today took many hours through bushranger-infested rough country in 1840. Ben Hyrons’ coach services at one point travelled to all the major towns in the colony, and his inns supported the service as posting houses where the horses could be stabled and changed. At one stage he had inns at Longford, Cressy, George Town and Launceston. During the 1850s he bought steam boats to operate between George Town and Launceston.


In 1859 Ben and his wife settled in Launceston where they ran their new inn, known as the Three Grand Masters (I’m intrigued to know why); and around 1860 that built the house in George Town which remains as the town’s oldest weatherboard structure.
Having finally brought Ben the George Town and the Cottage which bears his name, I must sadly advise that Mahala dies in 1861. However, after living for  a time at the Longford Hotel (I can’t resist listing every pub he was associated with!) Ben married for the fourth time, to Maria Duncan who was 20 years his junior. The moved back to the Three Grand Masters in Launceston, which was renamed the Shakespeare Hotel.


At the grand old age of 72, Ben Hyrons moved back to his cottage in George Town, where he died on January 21, 1873. Perhaps it was his ghost I heard walking upstairs int he wee small hours, both night that I slept there.... 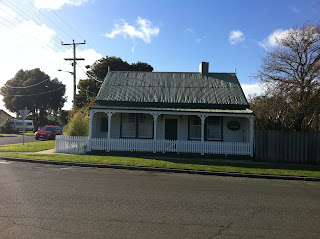 Posted by Annette Freeman at 1:48 PM