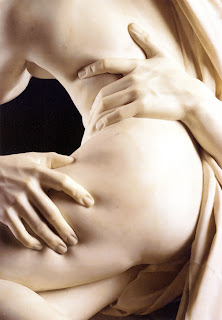 This post should really be all about the Galleria Borghese. After all, it takes weeks of advance booking to get an entrance ticket, it is stuffed with amazing treasures, is housed in a beautiful Villa standing in a serene and lovely park, and it took years (and quite a bit of skulduggery) for Cardinal Scipione Borghese to amass the treasures in the early 1600s and his descendants to continue the tradition. But despite all that there is to say about the Galleria Borghese, it is the Gian Lorenzo Bernini sculpture that steals the show. Bernini, Michelangelo, Raphael, Bramante, Cellini, Borromini: they may sound like Ninja Turtles, or perhaps cocktails, but these were the wide boys of Renaissance Rome, commissioned by popes and cardinals and noblemen to produce some of history’s greatest architecture and sculpture in a few luminous decades. Bernini was younger than Michelangelo, and his style moves into the Baroque. Where the Renaissance art is classic, refined and soothing, the Baroque is wildly moving, ornate and vibrant.
Bernini made marble do things you wouldn’t believe were possible. Look at the detail above from his ‘Rape of Persephone’ (1621-22) as she is dragged to the underground by Pluto. Yes, it’s marble though it looks more like live flesh, or a silken pillow. I walked around and around this statue in the Galleria, gobsmacked.
But his ‘Apollo and Daphne’ (1622-25) had me absorbed for a great proportion of the mere two hours that visitors are allowed on their pre-booked tickets. Apollo is trying to have his way with Daphne, but she implores her father the river god to save her and he turns her into a laurel tree. The sculpture shows her at the moment that her body turns into the bark of the tree and her hands and hair sprout twigs and leaves. The tiny marble leaves growing from her fingers are as thin and translucent as paper. The whole statue breathes life – it is a technical and artistic masterpiece par excellence.
Bernini’s ‘David’ could not be more different from that of Michelangelo. Where Michelangelo’s massive man stands calmly (in Florence), Bernini’s boy is in full action, his sling shot being wound up and his face grimacing with effort.
There is also another marble lady in the Galleria Borghese, much younger, made in 1805-1808 by Canova. It is said to depict Pauline Bonaparte, posing as a more or less naked Venus. The style is neo-Classical, with Pauline draped in satin – no, wait, that’s marble again. Pauline was a favourite sister of Napoleon Bonaparte, and married a Borghese. It is said that she caused a scandal by being sculpted in a semi-naked state, although this was the least of it. She was famous for her great beauty and her infidelity (and, in all fairness, for travelling to Elba to look after her brother when he was exiled there).
There are some stories of bad behaviour on the part of Cardinal Scipione Borghese too. He was clearly a pathological collector, and if he saw a work he craved he would, as they say, stop at nothing to add it to his collection. He was known to have owners of such works arrested on a trumped up charge, which he’d offer to drop in return for the art work.
And what a collection it is. The paintings include some marvellous works by Caravaggio, a wonderful ‘Venus and Cupid with Honeycomb’ by Lucas Cranach the Elder (Cranach seems to have turned these out rather frequently – you may recall a blog report about a very similar example in London’s National Gallery).
Re-visit it here.
But possibly my all time favourite amongst the paintings is Titian’s ‘Sacred and Profane Love’, partly because I don’t really understand it. I like a painting that makes me think. If you have any clues about this one, let me know. here's what the website of the Galleria Borghese has to say about it:

The bride dressed in white sitting beside Cupid is assisted by Venus in person. The figure with the vase of jewels symbolizes "fleeting happiness on earth" and the one bearing the burning flame of God's love symbolizes eternal happiness in heaven. The title is the result of a late 18th-century interpretation of the painting, which gives a moralistic reading of the nude figure, whereas the artist intended this to be an exaltation of both earthly and heavenly love. In fact in the Neoplatonic philosophy that Titian and his circle believed in contemplating the beauty of the creation led to an awareness of the divine perfection of the order of the cosmos.In this painting of love in the open countryside Titian has surpassed the delicate lyrical poetry of Giovanni Bellini and Giorgione and attributes a classical grandeur to his figures. In 1899, the Rotschilds offered to buy this world famous work at a price that was higher than the estimated value of the Villa Borghese and all its works of art (4,000,000 Lire as opposed to 3,600,000 Lire). However, Titian's Sacred and Profane Love has remained and virtually become the symbol of the Borghese Gallery itself.

Bernini became wildly successful around town. We’ve seen his contributions to St Peter’s Basilica. And he is also responsible for the ‘Fountain of the Four Rivers’ (1651) in the lovely (and popular) Piazza Navona. Here the four river gods represent the rivers Nile, Danube, Ganges and Plate, while the tourists eat pizza at the cafes and jostle to take photographs of the famous fountain.
Bernini. Not a cocktail, a genius.
Images from:
http://www.burkepaterson.com/bmad/2008/06/galleria-borghese.html
http://www.italianvisits.com/lroma/rome/rome-pix.htm
http://thegermansmakegoodstuff.blogspot.com/2010_05_01_archive.html
http://pilgreenenglish.wikispaces.com/Mythology
http://www.btinternet.com/~yannaco/Poetry.html
Posted by Annette Freeman at 10:59 PM