Procol Harum, 1967: a nostalgic journey for some of us:
We skipped the light fandango
turned cartwheels 'cross the floor
I was feeling kinda seasick
but the crowd called out for more
The room was humming harder
as the ceiling flew away
When we called out for another drink
the waiter brought a tray.
And so it was that later
as the miller told his tale
that her face, at first just ghostly,
turned a whiter shade of pale.
She said, 'There is no reason
and the truth is plain to see.'
But I wandered through my playing cards
and would not let her be
one of sixteen vestal virgins
who were leaving for the coast
and although my eyes were open
they might have just as well've been closed.
This was the debut song released by Procul Harum, an English group; and has now become one of fewer than 30 songs to have sold 10 million copies worldwide. And that was before You Tube and iTunes.
What has this to do with Ancient Rome? I hear you ask. The mention of the Vestal Virgins, of course. In the Roman Forum, using a great deal of imagination, you can visit the temple and residence of the original Vestals today – but please note, there were only ever six of them, not sixteen.  Their role was to live next to the Temple and keep an eternal flame burning, in worship of the goddess Vesta. She was the rough equivalent of Hestia in Greek mythology, but turned out to be way more popular with the Romans. Interestingly, she was the goddess of hearth, home and family. Rather endearingly, the Ancient Romans, for all their military, colonial, political and engineering expertise, placed a great deal of emphasis on the home and family. The domus was much more than just a house: the paterfamilias played a role for his women, children and slaves that was a reflection of the relationship between the gods and humanity. 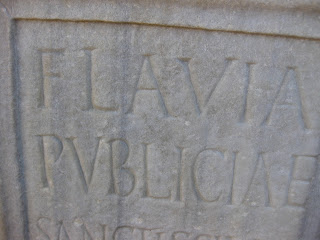 But back to the Vestals. As my guide Valentina and I sat on a nearby fallen marble column and considered the life of the Vestals, I remarked that it sounded pretty good to me. Valentina, who has trained as an archaeologist and history teacher, seemed unconvinced. But this was my argument: the Vestals had only two duties: to keep the flame burning day and night (if one let it go out, she could be whipped); and to not have sex (on pain of death). In return, however, they lived in one of the nicest complexes on the main street of the forum, with a lovely peristyle (garden with colonnaded cloister), could ride out around town in the temple carriage whenever they wanted. If they saw a condemned man, they had the power to free him. Vestals were chosen from the patrician families, and had to be without physical blemish and both parents had to be living. They were involved in all the big festivals, and were famous amongst the population. They were housed and kept for thirty years, from 15 until 45. After that, they could go off and get married, though probably only to a widower who already had children. None of this sounds too bad to me, but Valentina seemed to think the lack of sex, or perhaps it was the lack of children, was a very heavy price to pay.
Having enjoyed this interesting discussion, we climbed up into the remains of the Vestals’ house. Ranged around the grassy courtyard were various statues of famous vestals, looking a little macabre since most of them were missing their heads. It’s always the heads that go. But there were a couple of pretty faces amongst them, and they looked quite happy to me.


The Roman Forum (and the Forum of Trajan which is across the road that Mussolini built straight through the middle of the ruins) is a wonderful place to visit if you have a good imagination. Naturally, after 2000 years of strife and neglect there is little left, but what is there evokes a bustling ancient city, if you have a good guide and an ear for history. You also need the ability to ignore scaffolding, barriers and crowds. The road through the rough centre is called the Via Sacre, and many guide books and guides can fill you in on the names and purposes of the buildings ranged along it, so I won’t attempt to do that. But do be prepared for some odd results from the centuries of over-building: for one thing, the white ‘wedding cake’ of the rather ghastly 19th century Vittorio Emanuele Monument peers over the whole scene from one end. Possibly the most intrusive sight is the Temple of Antonius and Faustina into which has intruded an 11th century church.
Some of the ruins are beautiful in their own right, in a ruinous sort of way; and many are recognisable as famous images. The three columns and a piece of entablature of the Temple of Castor and Pollux are one of the most well known images of the Forum. In case you are wondering (I was) Castor and Pollux were the twin sons of Zeus and Juno, the Gemini twins. Aren’t mythological gods exotic and interesting?

Once you’ve considered the Forum, and reached Titus’s triumphal arch, you can climb uphill to explore the Palatine Hill. This was the exclusive housing district of Ancient Rome, and was where the Emperors decided to build their palaces – and what palaces they must have been, judging by the ruins that have been excavated: grand scale, wide planned gardens, and views across the Circus Maximus below. In fact, the Farneses liked the view too, and you can see one of their summer palaces up here, amongst the ancient ruins. And a grey building that used to be a nunnery and is now a low-key museum (closed). But there is also a very interesting site which goes way, way back to the dawn of Rome – possibly even to the earliest huts built here. Valentina’s inner archaeologist came out as she got a bit excited over the hut. It looks unprepossessing, but still...if it really is...we’re talking Romulus here.
Which brings us back to the Vestals:  One of the Vestals mentioned in mythology was Rhea Silvia who with the God Mars conceived Romulus and Remus, the famous founders of Rome. It is speculated that Rhea was put to death (seeing as she had broken the 30-year chastity vow). Vestals couldn’t be touched, so to execute them they were buried alive in a chamber. I will grant that this is rather a down-side.

Posted by Annette Freeman at 10:06 AM