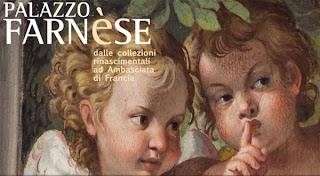 The Palacio Farnese, one of Rome’s more important Renaissance palaces (and amongst so many, that’s saying something) is generally closed to the public, since it is now the home of the French Embassy. However, a newspaper article last month alerted me to the news that the Embassy had curated a small exhibition, and were opening the Palace to visitors for the month of April: “reservations mandatory”.  Clutching my online reservation printout, I made my way to the Palace at the appointed hour, and kept my temper admirably while plumbing the depths of Roman inefficiency (who would have thought they could make a pre-booked ticket system into such a dog’s breakfast? Why two separate lines to check your bag and pick up the free audio guide? Why the same two separate lines to retrieve the bag and return the audio guide? That's four long queues to stand in. There is an excellent opening in this city for a skilled administrator. Even a semi-skilled administrator. But I digress).
In the delightful garden of the Palacio Farnese, and in its handsome courtyard (Michelangelo had a hand in the architectural design), there was sunshine and statuary. There were also enlarged pictures of other statuary, said to be in the Naples Archaeological Museum, whence one of the late Farneses spirited many of the collection’s most important pieces, for safe-keeping during a sticky patch. Prominently pictured in the garden was a striking statue featuring a legend and a bull, known as ‘The Farnese Bull’. In the courtyard, it was a massive Hercules, a copy of which was discovered, upon entering, upstairs.
Speaking of those stairs, they are broad, wide and made of marble, and it is said that visitors just rode on up them without dismounting from their horses. At the top, a small collection of some particularly fine bits and pieces made for an enjoyable hour. Architectural sketches in a room for which Michelangelo had had the ceiling raised – by one story; a copy of his ‘Last Judgement’ for the Sistine Chapel before it had been censored by having clothes painted on everyone (by Marcello Venusti); a spectacular frescoed chamber with rich baroque allegories covering every inch of wall and ceiling, known as the Galleria Carracci after the artist brothers who painted it. A particular favourite of mine was a lovely painting of a reclining Venus (or Aphrodite, depending on whether you’re feeling Roman or Greek) by Annibale Carracci, displayed alongside a beautiful Ancient Roman marble statue of the same subject known as the Venus Kallipygos; which means ‘Venus of the Beautiful Buttocks’. As indeed they are. In 1836, the following story was told of this statue being:
"...placed in a reserved hall, where the curious are only introduced under the surveillance of a guardian, though even this precaution has not prevented the rounded forms which won for the goddess the name of Callipyge, from being covered with a dark tint, which betrays the profane kisses that fanatic admirers have every day impressed there. We ourselves knew a young German tourist smitten with a mad passion for this voluptuous marble; and the commiseration his state of mind inspired set aside all idea of ridicule."
No-one kissed her butt while I was watching.
A word about these Farneses, since it is to them we owe the palace, the collection, and the rest of it ensconced in Naples. The founder of the firm, so to speak, was one Alexander Farnese, whose mother made the inspired decision to send him off to become a cardinal. In those days  (late 15th century), being a cardinal didn’t necessarily mean taking holy orders, and Alexander fathered a number of children, before rising to the eminence of the papacy. He became Pope Paul III. He set about promoting his sons and nephews, many also named Alexander, and the dynasty was off and running. The Palace was built by the family between 1514 and 1589. Various strategic marriages were made, including into the Spanish and French ruling families. Of course, you do have to be cautious when referring to the ‘nephews’ of these early popes, because they more often than not were actually sons. There is no need for us to get too caught up in the Farnese family tree, thank goodness, but I should sketch in the Naples connection. One Farnese married Elisabetta Bourbon, a Queen of Spain, and after the final Italian Farnese died without heirs, her sons inherited. They became Philip V and Carlos III of Spain. Carlos also became Carlos I of Parma (the Farneses were Dukes of Parma) and he went on to conquer Naples and Sicily in 1734 (he was 18) and became Charles VII of Naples and Charles V of Sicily. Confused? Let’s just call him Chuck.
Chuck is responsible for moving most of the moveable Farnese art collection to Naples; some pieces in the temporary exhibit are on loan from Naples museums. Others I’ll just have to seek out in Naples myself.
Charles and his wife lived in Naples for 19 years. She was a Saxon princess and is described as being an educated and cultured woman. She gave birth to 13 children, and then died at the age of 35. *sigh*  Time, I think, to leave the Paclacio Farnese, thank the French Embassy for its hospitality, and sit for a while in the piazza outside under a sun umbrella and enjoy a cappuccino. After I deal with those annoying queues, that is.
Images from:
http://www.viajandonomundo.com.br/index.php/palacio-farnese-de-roma-esta-aberto-ao-publico/
http://en.wikipedia.org/wiki/Venus_Kallipygos
http://en.wikipedia.org/wiki/File:Isabel_de_Parma.jpg
http://en.wikipedia.org/wiki/File:Charles_III_of_Spain.jpg
Posted by Annette Freeman at 5:44 PM