Perhaps you thought that Ancient Rome and the Renaissance were Rome's finest hours, architecturally speaking. I thought I'd check out a more recent candidate: Renzo Piano's Auditorio Parco della Musica, in the Flaminia District.

Renzo Piano has called the place a "cultural factory", which is a great sound bite meant to convey that fact that it is intended to be a centre which encompasses all kinds of art forms, performances and schools. But the main features of the building are the three large circular separated  concert halls. I liked the building. It is arranged in a wide sweeping semi-circle which forms firstly an outdoor forum or theatre space; then becomes a long curved foyer connecting the three separate round theatres. I found it understated, functional, light and restrained. When I say 'found it', it did involved a taxi ride out there, and then no taxi ride back. I can report that it is possible to walk from the Parco della Musica to Piazza del Popolo in about 45 minutes. Just in case you ever need to know.

I enquired about a guided tour of the building, preferably in English. There was a Belgian group going through that afternoon, but they would be guided in French. Tomorrow? Ah, tomorrow there are many tours. All in Italian. How about a ticket to a performance? Maybe - but would I have to walk back?

The Parco della Musica is home to the Accademia Nazionale di Santa Cecilia, conducted by Antonio Pappano, who is also the resident conductor of the orchestra at Covent Garden. The Accademia was founded in 1585 by Pope Sixtus V. Here's their website. There was a possibilty of a Mahler concert the next evening, but I decided not...


Wandering a little disconsolately through the semi-circular foyer area of the Auditoro, I chanced upon a small door marked "Museo degli strumenti musicali - Ingresso gratuito" . In a narrow low-lit corridor I found glass cabinets displaying some very lovely old musical instruments, some dating right back to Roman times (think a bit of wood with a couple of strings). The was a real live Stradivarius violin, and many beautifully made things. At the end of the corridor was a workshop - someone had a cello in for maintenance. This jewel of a find consoled me somewhat for the lack of a guided tour.


Here's a little information from the website of the Auditorium:


"The Auditorium's construction began in September 1995... The main entrances to the park and the underground parking are from Viale Maresciallo Pilsudski and from Via Giulio Gaudini. This gives an important physical and psychological continuity with the Southern and Eastern areas. On this plane, up a gentle rise, stand the three Music Halls; a sequence of large volumes similar to one another, of different sizes, but belonging to the same architectural family. " 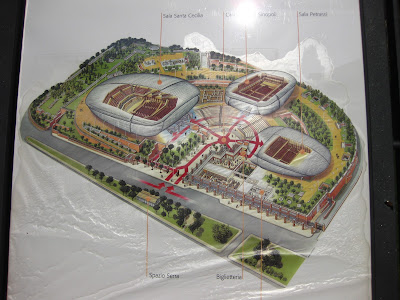 And from the architect:


"The most fascinating adventure for an architect is that of constructing a concert hall. It might be even nicer for a violinmaker to make a violin; but (given all the differences there are in size and time) they are similar activities. Ultimately, the objective is always to make instruments that are made for playing or listening to music.
The sound is what rules. The harmonic chamber must vibrate with its frequencies and its energy.
I have often found myself in the adventure of constructing for music: From the Paris Institute of Acoustic and Musical Research with Pierre Boulez and Luciano Berio, to the Prometeo with Luigi Nono, from the Berlin Hall to the Potsdamer Platz, from the Lingotto di Torino Hall to the Niccolò Paganini Hall in Parma, and now the Roman Auditorium.
In all these projects, music has always been the focus of my attention: working with acoustics, working with musicians. The Roman Auditorium, however, is not simply an Auditorium, but a complete City of Music: with three halls, an open air amphitheatre, large rehearsal and recording rooms."

Next time I'm in Rome, I'll book ahead for both an English guided tour AND a concert.

Posted by Annette Freeman at 8:59 AM