Greeks and Romans. And buffalo.

In amongst the cliff houses of the Amalfi Coast you may quite likely stumble across a Roman villa or the remains of a temple, almost 2000 years old. If you venture south or inland a little, you’ll also be able to find bits left by the Greeks, five hundred years earlier. The ancient Greeks were not particularly great mariners, but they did manage to explore quite far afield, considering the technology available in the 6th and 5th centuries BC. You may think that we’ve visited quite enough ruins already on this trip, but no....there is a ‘must see’ site about an hour or so south of Amalfi, called Paestum.
The Romans Latinized the name – the Greeks, who established the town, called it Poseidonia, after the Sea God Poseidon. The Greeks were here in the sixth century BC – very early, really – and the Romans colonised the site around 273 BC (also early in the Roman civilisation). But Paestum was abandoned by the ninth century AD, wrecked by Saracen raids and malaria, and thick forest grew over the whole site. Then in the eighteenth century, someone building a road dug up temple. During WWII British soldiers found a few tombs. The site is now wonderfully excavated, although only three large buildings really rise above foundational level – your well-honed imagination must be brought into play to imagine the Greek agora (marketplace) which later became the Roman forum; and to see the Roman roads now under your feet peopled with ancient folk about their daily business.
But Paestum was a three-temple town: and three wonderful temple remains stand high and beautiful in the fields of tumbled stones. The temples are said to have been dedicated to Athena (the Amazonian goddess of war, after whom Athens is named); Hera (who was the wife of Zeus); and Neptune, the local hero (although some think this might have been an eighteenth century gloss, and Neptune’s Temple, the best preserved Greek temple in Italy, was probably dedicated to Apollo, the popular Sun God). All three temples are built of a golden stone, and all retain all their columns, set upright and with most of their tablatures in place. Neptune’s Temple also still has most of its interior columns and walls, so is really missing only its roof. In each of them, it is easy to imagine the big statue of the relevant deity which would have been set just inside the main entrance.


The columns of these temples are clearly an early form of Greek architecture. They sit rather short and squat, tapering towards the top, and finished with over-large Doric capitals. Regular blog readers will recall that these are the very plain capitals. The Doric style reached its aesthetic pinnacle in The Parthenon, high on the Acropolis in Athens, where the columns are slim, tall and beautifully proportioned.  It is their chubby older cousins we see in Paestum.
Like all such sites, the fragile bits have been taken away and put into a museum. Very fortunately, the museum at Paestum is just across the road and is very, very well done. The new purpose-built building (putting the Naples Archaeological Museum to shame) does an excellent job of displaying and interpreting the finds from Paestrum. Perhaps the most moving and interesting are the tomb paintings – frescos were painted on the inside of burial sarcophagi (presumably for the on-going entertainment of the dearly departed) and thus were well preserved. Many are quite crudely painted, even sketched, leading to the suspicion that the artists may have had a tiny doubt about whether anyone was really going to be bothered.
But there is one set of paintings, from what has been dubbed ‘The Tomb of the Diver’, which is really quite beautiful and evocative. In the main piece, which would have rested over the deceased’s face, a young diver is pictured, his head held awkwardly up, in mid-dive from the top of a set of columns into an unknown sea below. The imagery has suggested an analogy for the transition from life to death – rather beautifully, I think. The side panels of the tomb somewhat enigmatically show scenes from a symposium, a Greek male drinking party. Everyone looks very merry. An early wake?
Having made the drive from Amalfi to this southern area, it would be foolish not to visit the other famous thing for which the area is known – buffalo mozzarella. The farms hereabouts produce quantities of the stuff. But the Vannulo property produces such good organic cheese that they don’t need a network of distributors: everyone beats a path to their door and they are sold out of fresh cheese by 2 pm every day. They also sell buffalo yogurt to passers by (so good – I knew you’d want to know, so I had to taste it). I also visited the buffalo, and more contented cows you are unlikely to find. They are even provided with an automatic backscratcher, should their gentle hearts desire it.
This story about the Vannulo operation includes a video clip of the water buffaloes. Here’s to contented cows. 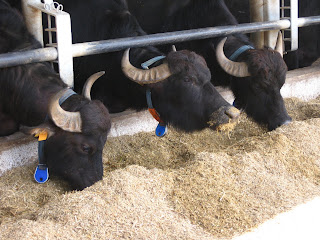 Posted by Annette Freeman at 10:32 PM