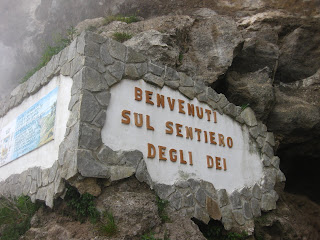 High on a hill I met a lonely goatherd. Well, he wasn’t really lonely – he asked my guide Giocondo for a light, there were all the other walkers, plus the goats with their bells clanging. But he was a genuine goatherd. Giocondo, who is into the Slow Food Movement, asked him about his goat mozzarella. We were walking the ‘Sentiero degli dei’, the ‘Path of the Gods’, and we were doing this despite the fact that the weather had come over very foggy and you could barely see three metres in front of you, much less the purportedly beautiful views over the Amalfi Coast. But despite Giocondo’s advice to the contrary, I’d decided I was all geared up to walk, and walk we would.

We began with a drive up to a high town called Praiano (there’s also a low bit of Praiano on the sea), where we left the car and paused for that apparently essential requirement of all Italian treks: a quick espresso.  The village was abuzz at about 11 am on a Sunday morning, the little piazza filled with men who clearly weren’t on their way to mass. Giocondo greeted friends left and right, there was much kissing of cheeks. A skinned goat was hanging for sale outside one shop, just in case you hadn’t got the Sunday roast organised.

Then off we set on the three-hour walk, through the fog and the Sunday day-tripping Neapolitans (“we call them barbarians”, said Giocondo, who was born locally). The walk goes high across the steep mountains – the so-called ‘Milk Mountains’ -  above the Amalfi coastal drive, and is known for its spectacular vistas. Every now and then Giocondo would pause, gesture out into the fog, and tell me that “just out there” was a coastline or a village or a mountain. I’m sure he was right. I enjoyed it very much. It was great to be out in some real weather, getting some exercise. The trail had bits of up and bits of down and none of these went on for too long before changing – the easiest type of terrain to walk.

After much upping and downing and a lot more fog, we began walking through relative civilisation – another small village or two. Young couples dressed in their Sunday best (very elegant) were wheeling out the equally elegant Nonnas for the family Sunday afternoons. Lunch parties were starting up on terraces amongst the lemons and olives. A lunch stop for us up here was a possibility, but we were a bit over the fog, so decided to walk down into Positano. Positano, as you may know, clings picturesquely and vertiginously to the Amalfi cliffs, and approaching it for the first time from above is certainly a novel introduction. We passed a small sign with an arrow saying “Positano. Steps.” About 45 minutes into this descent I asked Giocondo for an estimate of the number of steps. He said he had never counted them, but he’d guess about 900. It took about an hour to descend them, by which time I was ready for my lunch. Cheeringly, however, we were now below the fog and the village was spread out in pretty colours and sunlight. 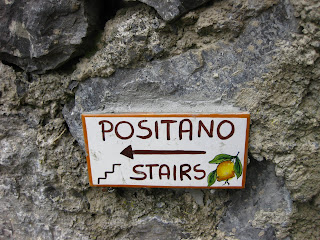 Giocondo showed his worth in the matter of lunch. We buzzed up – I in a weary kind of way – to a very swank hotel called The Sirenuse where it transpired that the manager, Giovanni, was Giocondo’s blood brother: “He ess een my ‘eart!” His niece works at reception and everyone there is his friend and there were introductions all round. Giovanni showed me to the restrooms to freshen up, gave a (deservedly) proud tour of the lovely hotel, then seated us on the terrace for lunch. The sun was now shining, the fish was exquisite, the service immaculate. The main dining room, used for the evenings, features a bower of plants – lemon trees in blossom, bougainvillea – trained to produce a veritable indoor jungle. It is lit at night with “480 candles”, said Giovanni proudly. What a sight it would be. Add that to the list of ‘must do’s’.

The rest of the day is a blur. Sentiero degli dei is aptly named.

Posted by Annette Freeman at 7:02 PM