Ravello is, I discovered, a small town only 6 or 7 kilometres from Amalfi, although due to the twists and turns in the road it takes about 20 minutes to drive there. It is quite an exciting drive, especially if it is your first along the famous Amalfi Coast road. I had read somewhere that Ravello had involved itself in classical music, although I was vague about just how. But I saw in the foyer of the grand old Hotel Santa Caterina, my home from home for five days, a poster advertising a chamber music concert in Ravello – that very evening. I asked the chap at the concierge desk about it, and he assured me that the summer concerts in Ravello, held outdoors, had not yet begun. “But see here”, I said, pointing to the poster and urging him to take a closer look. “Ah!”, peering over his glasses, “an indoor concert”. He made a phone call and I had a ticket. 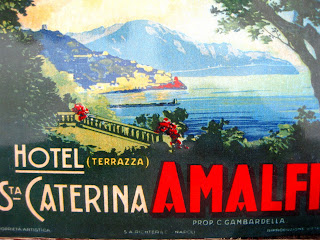 Franco, the redoubtable head Concierge at the Hotel Santa Caterina learnt about this transaction when he came on shift later that afternoon. Franco learns about everything that goes on at the Hotel Santa Caterina. It is the sort of hotel that they make situation comedies about. Anyway, Franco has taken rather a paternal interest in me, and he decided I needed a car and driver to go to Ravello, not just a cab. The driver would collect me after the concert. Sine I would be in a small village somewhere in the hills, which may very well not boast a cab rank, I agreed with Franco. Next, Franco addressed himself to the question of my dinner. He could recommend a small trattatoria, very good, and perhaps a drink in the square afterwards.
My evening commenced. The car driver’s name was Raphael. He made the precipitous drive in a professional manner, we arranged a meeting spot for après-concert, and he pointed me in the direction of the trattatoria. Inside, I took my seat and the mamma swept from the kitchen to tell me what to eat. Isn’t it amazing how little variation there is in Italian trattatoria menus? At least it keeps the decision-making to a minimum. Mamma hitched her apron and went backstage to oversee the production.
After dinner I ventured down the now quiet alleyways of Ravello to the piazza and looked about for the Villa Rufolo, venue of the concert. There was no signage, so I had to make my decision based on the look of the place – a lovely medieval tower, delicately lit in the dusk, a glimpse of gardens beyond, a wrought iron gate standing slightly open...I waited until I saw some people venturing in, and followed them Sure enough, the Villa Rufolo.
Inside, a small crowd assembled in front of a (baby) grand piano in a white-washed upstairs room of the Villa. Shortly the artist arrived and we enjoyed a very beautiful recital del pianist by Armando Saielli. He played two Beethoven sonatas; then after the break one by Schubert, then Schubert’s March Militare. Armando had a rousing style of playing that suited the repertoire.  I enjoyed the concert very much. Half an hour late for my rendezvous with Raphael, I walked back through the now deserted village and finally found him waiting at the appointed spot, for our twisting ride home down the mountain.
Although I saw its charms only in the evening light, Ravello is clearly a very lovely spot. A number of artists have found inspiration there. D H Lawrence, that inveterate traveller, is said to have written ‘Lady Chatterley’s Lover’ in Ravello. Grieg, Escher, Virginia Woolf, Greta Garbo, André Gide, Joan Miró, Truman Capote, Tennessee Williams,  Graham Greene, Leonard Bernstein are mentioned in connection with Ravello. Gore Vidal lived there. And it was a favourite spot of Wagner, a connection which has inspired the music festivals that Ravello now organises. Since 1953 Ravello has organised a summer music festival, and it is dedicated to Richard Wagner.
It is said that in the 19th century when Wagner visited Ravello he wrote in a hotel guest book: “The magical garden of Klingsor is found”. On this slight, and possibly apocryphal, evidence many claims are made about Wagner’s ‘Parsifal’, his last opera in which the magical garden of Klingsor occurs. I have heard or read that he wrote 'Parsifal' in Ravello, that he set part of it there, that it was the inspiration for Klingsor’s garden. Of course, having just seen ‘Parsifal’ for the first time last month, I am not sure I would like my place compared to Klingsor’s magical garden - it is a place of rather dark magic. And the opera is in fact set in the Spanish Pyrenees. But still. Let’s not quibble.
Posted by Annette Freeman at 8:54 AM