Time is moving on, many words have been written so far, and still I am only halfway through describing my first morning in Rome. This can be accounted for by the fact that I started with the ridiculously huge Vatican. It is a whole country, after all. After the museum, Manuel and I moved on to contemplate the also ridiculously huge basilica that is St Peter’s, Rome, home church for all Catholicism.
The building is Renaissance in architecture melding into Baroque in decoration. We can thank Michelangelo for the glorious cupola, and Bellini for many of the wrought and writhing Baroque decorations. The place is (somewhat blissfully) most emphatically not Gothic, which means no dark gloomy archways and no stained glass. No flying buttresses. The day I was there, the place was bright, with sun streaming through the high clerestory windows, like an ecclesiastical Grand Central Station. When I exclaimed at the brightness, Manuel warned me that on non-sunny days it can be much darker inside St Peter’s. 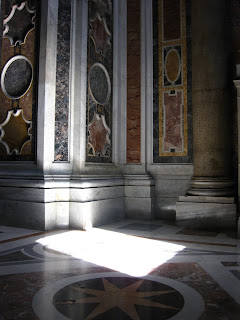 The basilica has the longest church nave in the world (211.5 metres) – the longest by a long way, as proven by the markings on the nave floor showing you just how short other churches are by comparison. The Cathedral in Seville (as regular blog readers will recall) proudly displays its certificate from the Guinness Book of Records authenticating it as the church with the largest floor space; it comes barely halfway up St Peter’s in nave length. I guess these things matter to some. Mine is bigger than yours and all that.
St Peter’s is so famous that you probably already know all about it, so I’m just going to hit the highlights, as indeed Manuel and I did. I’ll list them, in no particular order, unless roughly anti-clockwise....
1.       Michelangelo’s lovely ‘Pieta’, Mary with her dead son, now firmly isolated behind glass since a crazy guy attacked it with a hammer in the 1970s.
2.       The altar, covered with a quite bizarre bronze canopy held up by writhing trunks that look like palms or bamboo gone feral – a Bernini Baroque special. It is called a ‘baldacchino’, is 26 metres high, and is made of 927 tonnes of metal, a lot of it swiped from the roof of the Pantheon.
3.       The altar and baldacchino cover what is said to be the sepulchre of St Peter himself, the first pope. It seems he was buried on a hillside somewhere hereabouts, and after the Emperor Constantine decided that the Empire would be Christian (some say because he saw a vision; I say for sound political and governance reasons) a shrine was built on or near the site. After many convolutions of history it came to be the site of the basilica, despite being somewhat out of town and on the wrong side of the river.
4.       St Peter’s chair – yes, apparently his actual chair – encased in bronze so that it is a chair for a giant, and stuck up on the wall of the apse – Bernini again.
5.       A rather lovely alabaster window with a dove in the centre and sunrays radiating out, set in a another feverish Baroque wall.
6.       Several relics, including my personal favourite – St Veronica and the cloth she used to wipe Christ’s face as he carried the cross. There she is, made of marble, waving her cloth with an imprint of Christ’s face on it (think Shroud of Turin); and up above, where we can’t see it but we know it’s there, the actual cloth. *with the actual imprint of His face!*
7.       A most extraordinary piece of sculpture by Bernini for the tomb of Alexander VII, in the south transept, which manages to make heavy marble look like drapery suspended in the air over a doorway. Moreover, there is a bronze skeleton struggling to get out from under the folds, its bony foot hanging down over the head of the guardian standing in the doorway. I stood for a while trying to figure out just what was going on there.
8.       An actual pope. Yep, embalmed and on view in a glass case. Pius X, early twentieth century, beatified. You have to be Catholic, I guess.
9.       Down below, in the crypt, a quiet and calm place, three black-clad nuns kneeling and audibly praying before the supposed sepulchre of St Peter. Excuse my scepticism; I do appreciate the importance of myth and ritual.       Down here is also the original level of the first Constantine church on the site.
10.   Up above: the cupola. You take a lift to the roof, where there is a whole little townlet established. You can buy souvenirs and refreshments from the nuns, and observe that the backs of the statues which top the great oval of the piazza have not been carved like their fronts. Renaissance cost-cutting, I assume. You can walk inside the rim of the wonderful Michelangelo cupola, where the mosaic inscription is in letters nearly 2 metres high. Then you can climb 350 stairs up an ever diminishing dome shape to the quite small rim at the very tippy-top for a view of all of Rome, including a quite brilliant view down on to the piazza.
Tour over. I am quite exhausted. Ask the nattily-dressed Swiss Guards (yes, they are still Swiss, despite that country being fairly definitely protestant these days) to let you out through the grey plastic chairs and into the vast expanse of the great piazza, modelled on Roman forums, and of a scale to inspire awe.
It’s hot, but you can buy lunch nearby, where the young waiter in his white apron will urge you to come back on Wednesday for the benediction from the office window.
I found this rather good site which has a panoramic view of the inside of St Peter's. Put it on full screen to get a sense of the size of the place.
Posted by Annette Freeman at 3:46 PM