‘The School of Athens’. In Rome.

I spoke of Pope Julius II and his hiring of the Renaissance master Raphael to paint frescos all over his reception and living rooms in the Vatican. In one of these rooms – the library – I was enthralled to see a whole wall covered with a painting called ‘The School of Athens’, and I must tell you more about this. It depicts the major Greek philosophers, with a little bit (well, quite a lot actually) of artistic license taken in placing figures from different eras together on the steps of a forum presumably in the Athens agora (although the architecture in the painting is fully Roman Renaissance in style). In the centre are Plato and Aristotle (Aristotle looking perhaps more deferential to his erstwhile teacher than he eventually came to be). In the foreground and surrounding the two central figures are various philosophers and mathematicians – all the big names from the Classical world.
Heraclitus, he who said “you cannot step into the same river twice” is there – and he has been given the features of Michelangelo, who was painting the ceiling in the Sistine Chapel more or less next door while Raphael was working on this fresco. Plato has the features of Leonardo da Vinci, whose fame had reached Rome from Florence in the north. Euclid, the great geometer, is drawing a geometric figure on a blackboard with pupils around him, and he looks like the Renaissance architect Bramante. Diogenes, who founded the Cynical School of Philosophy, is reclining on the steps in the centre foreground, looking grumpy. Ptolemy the scientist holds a globe and Zoroaster the Persian prophet holds a celestial sphere. Pythagoras the mathematician is in one corner with young students.
You could spend ages peering at this painting (if the crick in your neck didn’t stop you - or buy the guide book with a reproduction, like I did) checking who and what is represented. The arts and the sciences are celebrated in a blend of geniuses and great minds through the centuries. Homer is said to be there somewhere, and Dante too, although I’m not sure where. Poets, musicians and their muses throng the scene. 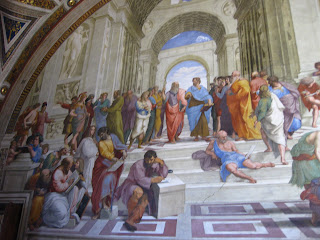 Very interestingly, to a student of philosophy where one is often asked “are you a Platonist or an Aristotelian?” Plato is shown with his hand pointing to the heavens, while Aristotle is shown with his palm facing downwards to the earth. This is a reference to Plato’s metaphysics which ultimately explained the world by reference to ‘Forms’ or Ideas’ which are beyond the everyday world: real but not tangible; while Aristotle, a student of Plato’s for twenty years, rejected the ‘Forms’ and sought to explain the world solely through tangible things.
And here’s something else fascinating: Plato is carrying one of his books: it is the “Timaeus”, his most ‘scientific’ work in which he attempts an explanation of time, space and change. Aristotle is carrying his “Ethics”, possibly his least ‘scientific’ work (he said that ethics could not be reduced to mathematical formula). All this intriguingly belies the heavens/earthly interpretation of their respective hand gestures.
Above the painting is the inscription “Causarum Cognitio”  - “seek knowledge of causes” – which might be thought a kind of philosophical motto. Some say it refers particularly to Aristotle’s philosophy and that he is the central figure in the work, but they are probably Aristotelians. It is one of four great paintings in the room, and opposite is an ecclesiastical work known as “The Disputation”, about which there is also much to be said, but one has to draw the line somewhere.
There have been a lot of discussions and disputes about who is who in the painting. In the centre left is a figure in a green robe who is recognisable as Socrates – we know what he looked like from ancient busts. He is gesturing to a youthfully handsome man in soldier’s costume, standing provocatively with his hand on his hip. Some identify this figure as Alexander the Great, but others as Alcibiades. I prefer the Alcibiades identification – he was a military hero of Athens who was enamoured of Socrates, and has the great final speech in Plato’s “Symposium.”
Over on the far right is a figure almost out of the picture which is a self-portrait of Raphael. Some have identified him with Apelles, who was a painter in Ancient Greece. On the left, his head wreathed in vine leaves, is possibly Epicurus, a philosopher known for his scientific bent, and belief in seeking happiness (I rather like him). Even dear old Zeno is there, he of the paradoxes. The figure beside Heraclitus, and looking as if he is disagreeing with him, is speculated to be Parmenides – his view of the world as ‘one’ was famously in contradiction to Heraclitus’ view of the world as ‘many’ (to summarise very crudely). Plato has a whole book called the ‘Parmenides’, upon which I (possibly in a foolhardy moment) chose to write my first Birkbeck philosophy essay.
The Wikipedia  entry on the painting has a very useful chart identifying everybody. It also tells us that there are sketches (or ‘cartoons’) for the work, and copies of it, all over the place. How wonderful to see the original in situ in the Vatican rooms! A thoroughly absorbing picture.
Posted by Annette Freeman at 7:51 AM