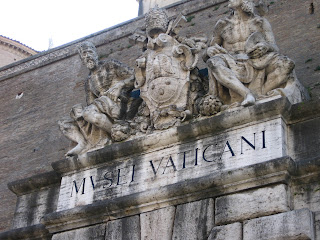 In the morning The Inn At The Spanish Steps proved its worth: the breakfast room has a terrace looking out over picturesque Roman rooftops. There are red sun umbrellas, potted plants in bloom, the sun shining...was there a reason I had to go sightseeing? Why not stay right here?
Oh yes...I remember...Rome. There is all of Rome to see in just a few days. I walked to The Vatican along the narrow Via del Babuino lined with upmarket designer shops, deserving better than the narrow confined sidewalk (a metre wide, if that) and hemmed in by tiny Smart cars and Vespas. I paused at Chiesa All Saints because I had read about operas performed there concert-style, in costume. Indeed they have Verdi’s ‘La Traviata’ on the current bill, but sadly not during the few days I am in Rome. *sad* The interior of the church – I peeked in – was about creaking floorboards, complete emptiness, and recorded plainsong echoing faintly. There is a church in every block in the centre of Rome. Sometimes two or three. I was to recall the attractive plain and empty interior of this one later in the day. (I was later told that this church is protestant – no self-respecting Catholic church would allow itself to be used for concerts.)
The Via del Babuino emptied into the broad and self-consciously grand Piazza del Popolo, where several more churches fronted the great cobble-stoned piazza, traffic was obliged to ‘go around’, crowds rested on the fountain base and I got my bearings for the next stage of the journey. This involved crossing the Tiber, getting rather lost in the precinct around the Vatican, but finally meeting my pre-arranged guide, whose name turned out to be Manuel (that’s a Spanish name, not Italian, as I’m sure you noticed; but Manuel was definitely Roman).
A fair bit of waiting about and queuing then went on while we got ourselves inside the Vatican Museum, and indeed inside the Vatican City itself, which is a self-contained city state, about 140 acres and 700 people, the smallest state in the world. (It even has its own gTLD: .va -  http://www.vatican.va/)  It has only been a state since 1929, declared as such for political advantage in uncertain times. Nevertheless, it has of course been the seat of considerable political power in times past. All this was to be revealed as we made our way through one of the largest, richest museums in the world. Actually, Manuel and I only had four hours, so we couldn’t possibly have covered every corner of this vast collection; but hit the highlights, we did.
The current entrance to the Vatican Museum is through a 21st century portico, commissioned in the time of Pope John-Paul II (he who is on the beatification list as we speak, and thus on many posters around town, especially this bit of town). The new entrance is handsome, and the entrance hall spacious. It was filled – I thought – with tourists, but Manuel said it was ‘practically empty’ compared to high season. (Memo: don’t visit here in high season).
Our first stop was in a square grassed courtyard where the sun was shining...on a strange bronze monument which appeared to be...yes, it was...an oversized pinecone. That would be why this is called The Pinecone Courtyard. The object in question is said to be from ancient Roman times, and was the first of many, many examples I was to see of objects from the ancient times which had been picked up, dusted off, and re-set in splendour within the museum of the popes. This is, I should point out, a ‘good thing’, since many of the treasure-troves of antiquity had lain mouldering through the long Dark Ages of the Goths and Vandals when the great Roman Empire ‘fell’ (I put that in inverted commas, because it was more of a gradually dying out). But - come the Renaissance! – lots of bits and pieces were found, appreciated, given a wash down and brush up, and put on show. And here they still are, in the Vatican Museum.
The pinecone, according to Manuel, signifies regeneration; it is flanked by two bronze peacocks (a vague nod to the Phoenix) and a couple of bronze lions. These are indeed treasures, dating from times BC. It is rare for anything bronze to have survived, because such items were very prone to be melted down, usually for armaments.