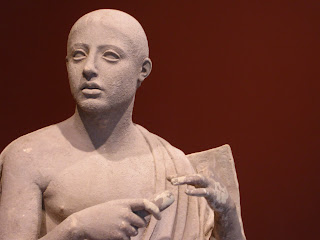 John Paul Getty was a wealthy – very wealthy – American industrialist. He was also a great collector of art and antiquities, with a deep interest in ancient times. He had a ranch in Malibu, perched up in a canyon looking down on what is now the Pacific Coast Highway. His collection grew so large that in 1954 he turned his ranch into a kind of house museum. The bright and beautiful of Los Angeles would put on their furs and trilbies and come to view the treasures, three afternoons a week, before cocktails.
Then Mr Getty found that his collecting was getting out of hand, so he decided to build a special museum for his stuff. Like a true dilettante, he aimed to re-create the Villa de Papiri. Now, if you have been reading this blog closely – and of course you have! – you may recall mention of the Villa de Papiri (House of Papyrus) in this entry on the Naples Museum. This Villa, near Herculaneum, has only partly been excavated from under the lava spewed upon it by Vesuvius. But just in case you were wondering what it (or any typical Roman 1st century AD country villa) might have looked like, you need wonder no longer. You can go see it at the Getty Villa in Malibu!
I’m a bit ambivalent about this project. At first I thought it would be very exciting to see the re-creation. After stomping around a lot of ruins (as I have recently) I thought it would be particularly intriguing to see such a villa adorned with paintings and frescos, its columns unchipped and its roof intact. But having visited Getty Villa, I’m afraid it is not quite the success that its owner would have wanted (Mr Getty didn’t live to see the Villa completed – it was finished in 1974 and he died in 1973). I can’t quite put my finger on it, but I think it is the use of so many modern materials, the over-use of trompe d’oeil, the roofing-in of the atrium that would have been open in a Roman villa...Still, whether the re-creation (renovated in 2006) works or not, it is a very apt building for displaying the very good collection of antiquities. Of course, the collection is not anything like the scale and depth of the treasure houses of those crumbling edifices, the archaeological museums of Athens and Naples, but for a private collection amassed outside of Europe in the 20th century, it is pretty amazing.
The highlights are said to be the Hercules and the Kouros. Now, the Hercules is good – but I’ve recently been to the Vatican and the Palacio Farnese and Naples, and, well....The Kouros is a lot more interesting, because no one knows if it is a fake or not. This is discussed quite candidly on the audio guide, and it is most interesting to closely examine the statue (of a young man) with a view to deciding for yourself if it was carved by hand 2000 years ago, or whipped up in an Italian garage with power tools ten years ago. And they paid $7 million for it in 1985.
But wait...there’s more, much more. The Getty Villa houses ‘only’ the antiquities from Mr Getty’s collection (of 44,000 – 1,200 on display). He was a very avid bower bird and the Getty Foundation has had to build an entire new building – actually a massive campus of buildings – to house the still-growing collection. Ten miles away, up on a hill above Pacific Palisades, sits the new Getty Center, worth visiting for the spectacular architecture as much as for the collection.
The architect is Richard Meier; the construction took nearly as long and was almost as over-budget at the Sydney Opera House – it finally opened in 1997 at a cost of $1.3 billion. The campus includes buildings housing the operations of the Getty Trust, as well as several galleries displaying European paintings, sculpture, furniture, photographs and temporary exhibitions. The gardens are a work of art in themselves (literally: the Central Garden is by artist Robert Irwin and is considered part of the Museum’s collection!) The whole thing sits beautifully on top of a ridge overlooking Los Angeles, and visitors approach on a little tram, after parking their cars at the bottom of the hill. I spent quite some time walking and sitting about absorbing the architecture and the views; but then...onwards– into the galleries.
With limited time and no desire to endure ‘museum overwhelm’, I chose my targets: Van Gogh’s “Irises”, Monet’s “Haystacks in Snow” and one of his 30 “Rouen Cathedral”s; a lovely display of Canaletto and his nephew Belotto and others who painted scenes of Venetian canals for English tourists to take home as souvenirs. Some nice Goya and Gainsborough and John Singer Sargent portraits. Very nice indeed. Of course I missed a lot – but it is always good to have a reason to return.

Meanwhile, the Getty Trust continues to expand the collection, run a conservation masters program, provide extensive educational facilities, and grants for art preservation projects all over the world. As far as I can make out, all of this is done on the proceeds of Mr Getty’s personal estate. No one charged me anything to see these collections and buildings (if you don’t count the parking fee – but hey!), and Wikipedia has some gossip about financial woes at the Trust in recent years; but it is undeniable that this legacy of one individual art-lover, J Paul Getty, is an extraordinary thing.
Posted by Annette Freeman at 7:12 PM