To visit Hearst Castle, you drive down the coast from Big Sur to San Simeon. At least, you do if the road is open. If it is closed by a rock slide, you drive back to Carmel (a great drive, I must say), across to Salinas (where John Steinbeck was born, so that’s interesting), then down 101 (boring but fast), back west across 49 (wine country, but you probably won’t have time to stop); then north again on Highway 1. *Whew* If, like me, you have a 2 pm booking for the Castle (tours must be booked), and you lingered too long over breakfast outdoors at the delightful Ventana Inn in Big Sur, you will be tired of driving and relieved to have made it in time for the tour, with about 30 seconds to spare.
Now, as to this Castle – you may be wondering. Is it a Castle? No, it’s a country villa (or ‘ranch’, as he called it) built by William Randolph Hearst, the newspaper and mining billionaire in the 1920s, 30s and 40s. It took him and his architect, Julia Morgan, 28 years to build the thing. It is said that Mr. Hearst (as he is always referred to at The Castle) changed his mind a lot. The general inspiration for the thing was a Spanish medieval cathedral, and that’s just what it looks like. Mr Hearst was fond of collecting, and he collected things like whole monasteries, massive stone fireplaces, convent doors, ancient Egyptian statuary...you get the drift? Hearst Castle is one of those things you should see if you are amazed by what man can produce – it’s in a similar category to, say, Venice or Disneyland.


It also has the allure of the glamour years of Hollywood: the starlets and the leading men from Burbank and Hollywood would congregate here for country weekends. Mr Hearst built four special guest houses on the estate to accommodate them all. His ‘special friend’ (scandal!) was Miss Marion Davies, a 19 year old starlet when she met him, several decades her senior and married with a wife and five sons in New York to boot. All the great and glamorous gathered at Hearst Castle, and lolled around the pool, played tennis, drank martinis, smoked a lot of cigarettes and dressed for dinner. Winston Churchill stayed here; media barons and industrialists chewed on cigars while Bing Crosby played the piano. You get the idea.


And what does it look like? Some bits are successfully beautiful; others step over that very fine line into kitsch and absurdity. The hilltop terraces with sweeping views (Hearst owned all the land you can see from up here – inherited from his father who bought it cheap during the gold rush years), the rather spectacular outdoor swimming pool, the overdone but magnificently proportioned drawing room – these worked for me. The facade that looks like a catholic church started to worry me; the dining room is ridiculous: carved choir stalls along the walls, a long refectory table set with six places and some ketchup in the middle, disparate objets like a silver mace and flags from the Sienna horse races – nope, the dining room crossed the line into rampant acquisitive tastelessness.

The movie theatre was acceptable – at least it was true to its era, and we got to watch grainy black and white film of Charlie Chaplin hamming it up around the Castle. And the final piece de résistance was worth the price of admission – the indoor Roman Pool, with its exquisite reflections, gold leaf, marble ladders and copies of Roman tiles.

I left the bus, somewhat ambivalent about the whole thing, and headed to the fast food counter to munch on a beef sandwich – Hearst beef – the family trust still runs the property as a working beef farm. It is said that some zebra, descendants of Mr Hearst’s private zoo, still roam the property amongst the cattle. I kept an eye out, but can’t verify that story. 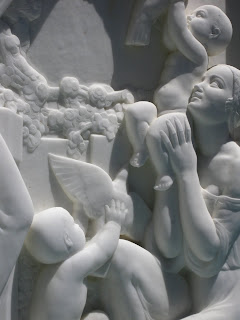 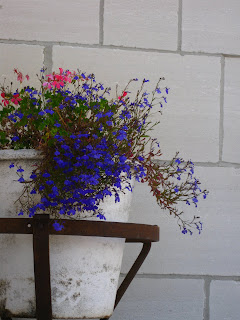 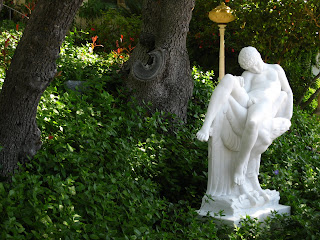 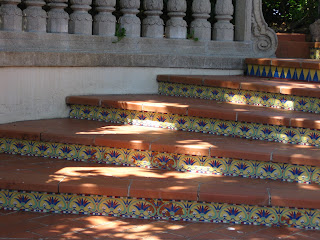 Posted by Annette Freeman at 3:31 PM