If you go down in the woods today

Heading out of Monterey I drove up Ocean View Avenue, passing some spectacular rocky sea scenery. Then I paid my $9.50, somewhat wryly, to drive the pithily named “17 mile drive”. This (admittedly well-kept) road hugs the coast and boasts more fine scenery on one side, and golf courses on the other. I stopped here to walk on the sand where some huge waves crashed – the sea seems to be boiling sometimes, due to undersea rocks – and to see the birds and sea lions. The road then winds through Carmel, or – to give it its full name – Carmel-by-the-Sea. More scenic splendour on one side, and on the other some wonderfully gimcrack-y houses with cutesy-tootsey shingle roofs. I paused at a wetlands, and on top of the hill at Carmel Mountain; then hit the really famous bit of road into Big Sur.
Driving the coast road into Big Sur (and, I’m told, out of it) is nothing short of spectacular. The guide book is full of warnings about the perils of twists and turns and rockslides and other general perilousness, but I found that the biggest issue was the number of times I needed to pull over and stop to take in an amazing view or walk down to a strip of pristine beach with crashing waves, or to goggle at the road snaking away across a teetering narrow bridge over a gorge. The driving itself wasn’t too bad (the Amalfi Coast, with which this stretch is often compared, seemed a little tougher driving to me). I don’t think I’ve ever been on a road with more pull-outs for stops – or more cars taking advantage of them. I took about 2 hours to do a 45 minute drive, in a stop-start fashion.
I cruised across the famous Bixby Bridge, which spans Rainbow Canyon and is one of the world’s highest single-span bridges at 260 foot high. It was built in 1932 with prison labour (a prisoner could reduce his sentence by working on the bridge). 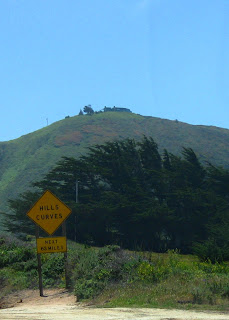 As I mentioned, the road is reputed to continue its spectacular way south of Big Sur, but I discovered that I, sadly, would not be going that way. A rock slide has taken out the road about 45 miles south, thus effectively cutting the only coastal link between here and points south. My route will be back the way I came....and inland, then north again. About 3.5 hours instead of 1.
But that is for tomorrow. Today, I lunch at Nepenthe, a hilltop terrace restaurant with spectacular views which is something of an icon in these parts. The name comes from Greek myth, and it has its modern myth too: Rita Hayworth and Orson Welles bought the place in 1944. Apart from the views, the attack raids by the blue jays on your food are also memorable.
As to Big Sur itself, blink and you’ll miss it. The population is said to be 1,000, though that may be stretching it. As my guide book (Lonely Planet) puts it: “Big Sur is more a state of mind than a place you can pinpoint on a map. It has no traffic lights, banks or strip malls, and when the sun goes down, the moon and stars are the only streetlights.” In the 1950s and 60s Big Sur was a retreat for the funky writers of the Beat generation, such as Jack Kerouac. Perhaps most notoriously, Henry Miller lived here for 17 years – after his Paris phase and Anais Nin and his books being banned in English-speaking countries and all that fuss. I visited the “Henry Miller Memorial Library” which sells his books and keeps the flame burning. Big Sur is said to still “attract mystics, artists, hippies and eccentrics looking to contemplate their navels, along with city slickers eager to unplug their iPhones...”
Actually, you don’t really need to unplug your iPhone because the reception is pretty dodgy anyway. But as compensation for the lack of connectivity, I did meet several wild deer on my way to dinner through the woods.
It would be appropriate to give you a few words from Henry Miller on the subject of his beloved home, Big Sur:
It was always a wild, rocky coast, desolate and forbidding to the man of the pavements, eloquent and enchanting to the Taliessins. The homesteader never failed to unearth fresh sorrows. There were always birds: the pirates and scavengers of the blue as well as the migratory variety. (At intervals the condor passed, huge as an ocean liner.) ...Though young, geologically speaking, the land has a hoary look. From the ocean depths there issued strange formations, contours unique and seductive. As if the Titans of the deep had laboured for aeons to shape and mould the earth. Even millennia ago the great land birds were startled by the abrupt aspect of these risen shapes. There are no ruins or relics to speak of. No history worth recounting. What was not speaks more eloquently than what was. Here the redwood made its last stand. (from ‘Big Sur and the Oranges of Hieronymus Bosch’) 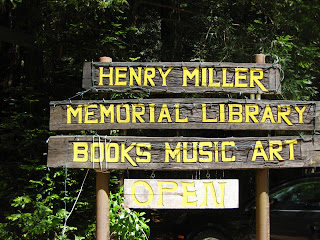 Posted by Annette Freeman at 7:37 AM