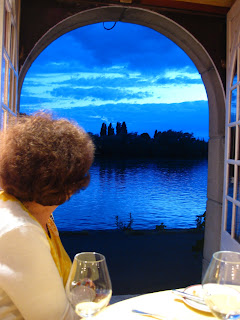 We left off last time sitting in a lovely restaurant in rural France, watching the dusk descend over the Seine. After a good night's rest, continue your tour the next day. Get the GPS programmed. Head for Rouen, one of the most delightful cities I’ve ever walked around. We parked the car near the Hotel de Ville, and rushed to examine the magnificent church next door. Was this the famous Cathedral? No – “merely” a non-guide-book-rated abbey. An impressive ‘second-string’ edifice! Off we wandered through the medieval streets of the old town, heading towards an impressive spire – is this the Cathedral? No – another exquisite church, but an ‘also-ran’. On we searched – a wonderful medieval clock, another magnificent church, ‘faience’ in the shop windows, another spire, a Norman tower. Pretty impressive ‘also-rans’ in this town!
Eventually the Cathedral was located, its magnificence rather subdued by renovation scaffolding, and the fact that it was closed until 2 o’clock. But the scale of its facade, its square Norman towers, and its famous cast-iron spire (the tallest in Europe) told us that we had found le premiere site. So this was how magnificent you had to be to reduce all those other great buildings to ‘also-rans’!
Across the square in front of the Cathedral were half-timbered shop fronts, one of which used to house a haberdasher (now the tourist office). Monet used to rent a change-room-sized space, curtained off, in the upstairs window of the haberdasher; and from there he would, somewhat obsessively, paint the facade of Rouen Cathedral in all its changing light moods. He painted it over 30 times.
But, not waiting for the 2 o’clock opening, we continued our tour of Rouen and found a rather interesting modern church, with a high steel cross in its forecourt. This marks the site of the burning of Saint Joan of Arc, the Christian martyr. The fish market is next door now.
Life goes on, and so did we, setting off to see what the Norman coast had to offer. What it offered were two very different experiences. Exquisite Honfleur is a fishing village, with a curious church made entirely of wood (built by the shipwrights of the town), cute shops, and a wonderful waterfront lined with bistros which will feed you. Fish, naturellement.
Further along the coast, we joined the rich and famous at the playground of Deauville – think casino, film festival, golf; bring your designer shades, your Gucci, and your poodle. Wait – we had two poodles with us, so we were cool. Deauville has a very upscale end of town, and a very delightful shopping area, and – its main claim to fame – a proper beach. You know, long, sandy, no pebbles and grit, and so on. Since it was still a little early in the season the beach was not in full swing, the colourful umbrellas were still furled, making a lovely David Hockney-esque view. We sat at a beach cafe and ate ice cream. One of us – she shall remain nameless – ordered something green called a “diablo”. It was that kind of afternoon.
Posted by Annette Freeman at 1:34 AM