Where little cable cars climb halfway to the stars...

A week in San Francisco – networking, meetings, enjoying the city and allowing the blog to get very behind-hand. But now it’s time to encapsulate the whole week. I seem to have quite a lot of food photos – clearly San Francisco had much to offer on the culinary front. I also have some unusual pictures of the Golden Gate Bridge, such as can only be obtained by sitting outside on the top of a double-decker tour bus (and successfully avoiding being blown off). Quite a number of people I know went riding across the Golden Gate Bridge last week, variously on motorcycles or bicycles. My excursion was rather more staidly taken on said bus.
I have visited San Francisco eight times before (I counted them up – it seems to be kind of a second home!) and so I have ridden the cable cars, eaten chowder at Fisherman’s Wharf, seen the redwoods in Muir woods, strolled Sausalito, been spooked by the audio tour on Alcatraz, checked out the hippie remnants in Haight Ashbury, and spent absorbing hours in the SFMoMA. On this trip I repeated only the last. No one should ever go to San Francisco and not visit the SFMoMA.
But there was one remarkable landmark of San Francisco that had so far escaped my attention: the City Lights Bookstore  in North Beach. That omission was remedied with a morning excursion up Montgomery Street to Columbus and Broadway, and a happy hour was spent inhaling the atmosphere of left liberal politics and Beat poetry. The store was established in 1953 by the poet Lawrence Ferlinghetti, who also began City Lights Publishing in 1955. These days, down around Market Street in San Francisco, many of the bookshops have disappeared including a massive Borders store, and the marvellous independent, Stacey’s. But thankfully City Lights lives on! It is a rather small, enticingly crowded shop in a quaint wooden corner building quite near the Church of St Francis (San Francisco – geddit?)  It is surrounded by the little Italian trattatorias and funky bars of North Beach, and about a block from the teeming vegetable markets of San Francisco’s large China Town. 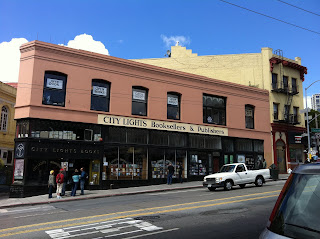 City Lights’ range is absorbingly eclectic, including an extensive collection of European fiction in English translation, a deep range of Beat poet publications (including, famously, Alan Ginsberg’s banned “Howl”, lots of Jack Kerouac, and Ferlinghetti of course. Ferlinghetti used to live in a flat above the shop. Here’s a bit about him from the shop’s web site:
The bookstore has served for half a century as a meeting place for writers, artists, and intellectuals. City Lights Publishers began with the Pocket Poets Series, through which Ferlinghetti aimed to create an international, dissident ferment. His publication of Allen Ginsberg's Howl & Other Poems in 1956 led to his arrest on obscenity charges, and the trial that followed drew national attention to the San Francisco Renaissance and Beat movement writers. (He was overwhelmingly supported by prestigious literary and academic figures, and was acquitted.) This landmark First Amendment case established a legal precedent for the publication of controversial work with redeeming social importance. 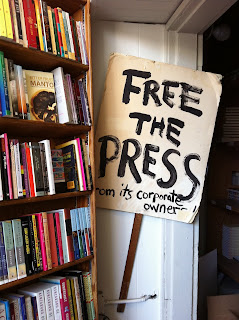 And what did I buy? I hear you ask. A book about the “Howl” trial, some short stories published by City Lights, two John Steinbeck books....I’ve checked “Howl” to see if there is an excerpt I could share with you that is suitable for a respectable blog. I’m unsure....but here goes....
I saw the best minds of my generation....who talked continuously seventy hours from park to pad to bar to Bellevue to the Brooklyn Bridge, a lost battalion of platonic conversationalists jumping down the stoops off fire escapes off windowsills....
With apologies to the late Alan Ginsberg, that is a fairly accurate description of the 9,000 conventioneers with whom I spent the week. But despite some rain and wind and a sad lack of cabs, San Francisco still charmed us all. I think I left my heart in San Francisco...again.
Posted by Annette Freeman at 6:09 AM