Lately I have been a little slow with new posts, since I've been taking advantage of what London does best: theatre and music. The place is a cultural cornucopia! As I've seen so many excellent shows, I will tell you about them in one post...here goes: 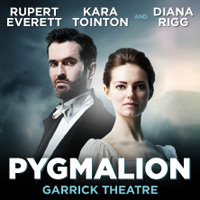 The play on which the movie "My Fair Lady" is based is playing at the Garrick Theatre, with Rupert Everett as an unlikely but successful Professor Higgins. The Eliza Doolittle is less successful (Kara Tointon) - she is sadly unbelievable as a rough-speaking flower girl, and there isn't much in the way of energy between the couple. Diana Rigg (remember Emma Peel in 'The Avengers' in the 1960s? or was it 70s?) is an excellent Mrs Higgins, and I liked the other cast members too.

As you may know, George Bernard Shaw wrote a number of different endings for his play. The director here, Philip Prowse, chose a kind of 'women's lib' version where Eliza becomes instantly desirable when she displays some independence of spirit: politically correct but slightly less like real life, IMO. But I could spend ages talking about this - it is not irrelevant to consider the myth of Pygmalion.

On the subject of the English language, the play program had an interesting article about Shaw, who served on a committee called "The Advisory Committee on Spoken English", and campaigned for much of his life for what he called an 'English Alphabet'. It contained 42 letters instead of 26. At one stage he put his case on economic grounds: for example, his surname had two sounds but he had to spell it with four letters - a "100 per cent loss of time, labour, ink and paper." The Shaw Alphabet was in fact published in 1962 with funds left by Shaw in his will.

This opera was a very interesting experience on a variety of fronts. First of all, it was the first Covent Garden rehearsal I've attended - the seat cost only 12 quid and was waaaaay up in the gods. The singers looked like little specks, viewed from far away, but the sound was excellent. I was surrounded, at 11 am on a Saturday, with little old ladies and gents who brought their sandwiches for interval, and who valiantly struggled up the several long staircases needed to reach this hidden eerie (well and truly hidden fromt the Orchestra Stalls, where I usually sit for sometimes as much as 200 quid!)

On another front, I had never heard this opera before, and it was delightful. Also, the staging (Barbara de Limburg designer), especially the costumes (Laurent Pelly designer), were magical and spectacular -- think dozens of princesses all dressed in misshapen scarlet. And a Cinderella in a huge merinque of a ball gown. Yes, 'Cendrillon' (sung in French, obviously) is the good old story of Cinderella, but with the rats and mice and pumpkins and with some psychological deep-and-meaningfulness added. But there's stilla Fairy Godmother and she had wonderful high and spectacular colouratura to sing - very well done by Eglise Gutierrez.

But I haven't even got to the good bits: Cendrillon herself was sung by Joyce Di Donato, an American soprano who is drop dead brilliant and I'd walk miles to hear her. But then on came Prince Charming (a trouser role) and I was captivated by the voice of Alice Coote, an English mezzo. The two of them together were to die for. But luckily that's 'Romeo and Juliet', not 'Cinderella'.


Theatre: Rosenkrantz and Guildenstern are Dead by Tom Stoppard

And so from the frippery and fantastical to the cerebral and...well, fantastical. Tom Stoppard is always a bit (actually rather a lot) cerebral, and this play is no different. Which is to say, it is very clever, and repays close attention. I first came across it as a school text many moons ago, and thus had forgotten most of it. But I'd always recalled the first scene, where R & G are flipping coins and 'heads' always comes up. As you may know, the two are minor characters in Shakespeare's "Hamlet". Stoppard has taken them, re-imagined them, and used them as allegories for all kinds of things. What these things might be seem to vary depending upon the audience member. There are lots of references to philosophy, some self-deprecating remarks about England and the English (Hamlet et al, and presumably R & G, being Danish, you'll recall) and a very interesting major character with no name, identified in the program as "The Player".

I enjoyed the production very much - it was cleverly directed (the excellent Trevor Nunn, who seems to be practically a Theatrical God in London - he directed 'Flare Path', reviewed earlier on this blog) and very well played by the two principal players (they can never remember which is Rosenkrantz and which is Guildenstern - they're interchangeable, geddit?), Samuel Barnett and Jamie Parker. The Player, and actor, was played by Chris Andrew Mellon, an actor. There was also a play within the play, as in 'Hamlet'. I'll leave you to ponder the implications.

One interesting feature of this production, and one which many theatre companies may be unlikely to be able to boast, was that the cast and director had the benefit of Stoppard actually consulting with them at rehearsals. Sheesh! If they can't do a good job after that...but they did.


A new venue, a new orchestra and new music - a few discoveries for me here, and Five Stars to them all. The venue was a space known as LSO St Luke's - 'LSO' because it is the home of the London Symphony Orchestra's youth and education wing, and 'St Luke's' because it was once an 18th century church. In the 1950's it almost collapsed due to subsidence (you should see the old photos - columns adrift from the roof they supposed to be supporting). It's roof was removed and it was left derelict, until transformed into what it is today - a great recital and performing space, now held up by sturdy metal pillars. The acoustic in there is quite lovely.

Aurora Orchestra is a chamber-style outfit, a young-looking group on the whole, that has been around for about six years, playing interesting contemporary things, and doing lots of school and educational programs. I was exceedingly impressed with it. The conductor was energetic and passionate and transmitted this to his performers. His name is Nicholas Collon. The orchestra was joined by a lovely choir named 'Choir of London' (I'd suggest a re-naming exercise). The choral parts were divine. And a special treat (and the reason the concert took my eye): Australian Brett Dean, a composer and accomplished viola player, as the viola soloist for the Vaughan-Williams piece. Then they played a piece composed by Dean (if you're really devoted to this blog, you might look back to last September when I went to Edinburgh to hear (again) OA perform Dean's first opera, 'Bliss').

The program was loosely based on the subject of nature - recorded birdsong was played at interval, there were some abstract paintings displayed....here's the musical program:

Beethoven: 'Symphony No.6 (Pastoral)': I guarantee you'll all know this one if you heard it. It was wonderfully played.

The encore was a version of 'Danny Boy' with the choir singing without words. It was beautiful enough to bring a tear to the eye. Ineffably sad.

I will be seeking out Aurora Orchestra and Choir of London again.

"To launch a new orchestra in the cut-throat musical marketplace that is London requires courage and conviction. To sustain it through five seasons, during which you programme everything from the Baroque sounds of Gabrieli and Lully to the avant-garde scores of Berio and Adams, shows brilliance as well as bravado." (The Times, 2011)

I guess that's enough performance-going for one week. I hope you enjoyed yourself - I did. 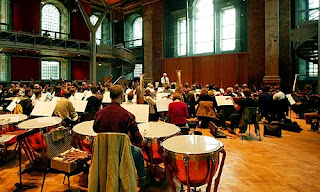 Posted by Annette Freeman at 7:53 PM