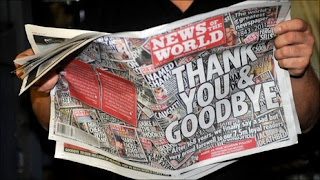 I had drinks with Tim the other day, an ex-colleague from Sydney, who has been living in London for the last 12 years. He and his family are about to move back to Australia. One of his concerns was: “we’ll only have two newspapers to read!” He looked a little shocked when I ventured to suggest that one needs nothing more than the Sydney Morning Herald.


London has a choice of about a dozen papers  - I tried to find the exact number, but it seems they are too numerous to count...and of course a famous (or infamous) one has just closed its doors after 168 years. Yes, the News of the World, a Sunday tabloid rag, has  shut up shop with its last - 8,674th - edition today. The papers here are generally grouped into three groups - the mass market tabloids, or "red-tops" (e.g. The Sun), middle-market tabloids (e.g. the Daily Mail), and quality broadsheets (e.g. The Times). Then there’s the free newspapers - Metro in the mornings and The Evening Standard in the - as you would expect - evenings. As well as covering the spectrum from bleedin’ awful tabloid rubbish through mildly sensational middle-brow, the papers also cross from right to left of the political spectrum. As regular blog readers will know, when I moved to London I chose The Guardian as my daily press, and The Observer on Sundays. The Independent was a second choice. Here, folks, we are well into the leftie spectrum, but hey - that’s where I’m happy. Living in St Pancras International train station I also have the option of the leading European dailies, and if I could read French, Spanish, German or Italian, no doubt that would be good. European house guests have found it very convenient! And I do sometimes treat myself to the International Herald Tribune, the international (in this case, the Europe-based version) of the New York Times. 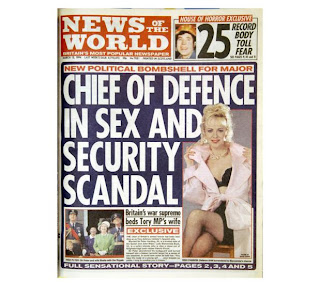 But what, I hear you ask, is the local spin on the demise of the News of the World? Well, since I am a confessed Guardian reader, I can report that there is much chortling in leftie ranks. The Guardian has been pursuing the Murdoch empire over phone-hacking allegations ever since I arrived in London and took it up as my daily press. So it is perhaps understandable that it should now be crowing, since it has emerged in a fast-breaking deluge of scandal that not only did NOW journalists hire seedy private eyes to hack the phones of celebrities, they also did the same to those of crime victims, including deleting voicemails and emails, and, moreover, paid bribes to policemen. Interestingly, they also thought - until The Guardian put them right - that this was perfectly alright and “business as usual”. 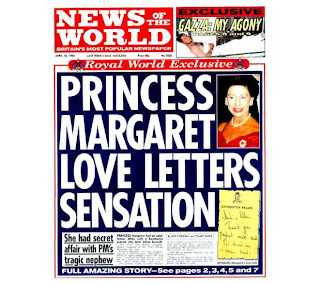 The invasion of celebrities’ privacy was hard pressed to rouse much sympathy from the Great British Public (who seem to like their titillating Sunday junk - NOW claimed 7.5 million readers every Sunday!) But when details of the targeting of crime victims emerged, some kind of heretofor invisible line seemed to have been crossed and outrage now abounds. News Corporation (who owns NOW) shut it down straight away (there’s a pay TV deal in the works worth billions that looks under threat - whoops!), though the alleged (but pretty much admitted) transgressions happened four or five years ago and were perpetrated by people no longer working at the paper.


In my opinion the closure of such an awful rag is a great thing. Here’s one memorable headline it has used in the past that I’ve seen quoted, just as an example:


The final edition is emblazoned with headlines past and present - they seem weirdly proud of them: “Caught!”, “Drug deal video”, “Beckham’s secret affair”, “Jacko’s deathbed”, “Fergie ‘sells’ Andy for £500”. Puzzlingly, they also claim to be “the world’s greatest newspaper”. Teary-eyed staff talk not so much about losing their jobs but about missing the ‘cult-like’ ‘family’ atmosphere of the NOW newsroom. How come they don’t see how dreadful tabloid journalism is? Come to that, how come 7.5 million weekly readers don’t see it? Just one of those cultural mysteries....


A couple of intrepid celebrities have been leaping about with glee on the grave of the NOW. A comedian named Steve Coogan said:

“People keep saying it is a bad day for the press. It is a wonderful day for the press: a small victory for decency and humanity...People talk as if they had fallen below their usual high standards. They were already in the gutter, it’s just that they have sunk lower than anyone thought they could.” 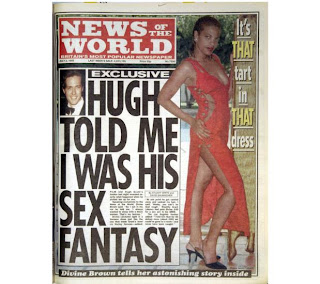 He also described the tabloid as “a misogynistic, xenophobic, single-parent-hating, asylum-seeker-hating newspaper”. As he said in what was described as a “heated exchange” (love that cliche - so evocative) he told a former NOW editor “Your attitude is ‘we are only trying to sell newspapers’, or ‘we are investigative journalists’. You are not fighting corruption, you are not bringing down institutions that are inherently corrupt. You are just trying to find out who is sleeping with who.”


It is only fair to give the ex-editor’s response (though you can probably guess it): “we would have no freedom of the press....you have a publicist and spend your whole life trying to get into the papers....we do these kiss and tell stories and 5 million people read the paper, and then when a good story comes along and bad guys get exposed, 5 million people read it.” There’s some spooky social anthropology in that last excuse for bad behaviour. But how about this one, justifying actual criminality:

“So you take a million quid a movie and then you bleat about the fact that someone listened to your phone messages.”

Wow. And I thought Australia had a Tall Poppy Syndrome problem.


So here’s to one less newspaper in London, the city with more papers than you could ever read. There is no hope of reading across the spectrum to balance out your journalist-viewpoint intake - you should just choose your poison, recognise it for what it is, and settle down in your self-allotted slot. I can do no better than to end this post with the famous clip about British newspapers from the late lamented (although now revived as a West End stage show) “Yes, Prime Minister”.

The delightful examples of front pages from the News of the World come from the paper's web site and a gallery they proudly extol as "best front pages". I rest my case.

Posted by Annette Freeman at 10:53 PM

Email ThisBlogThis!Share to TwitterShare to FacebookShare to Pinterest
Labels: London, The British