What to expect from Morocco? Like ‘Casablanca’ and ‘Fez’ and ‘Tangiers’ the mere name evoked a whole slew of exotic and even mythic assumptions: from hoards of demanding beggars to Rick’s Cafe (“have you got the papers?”) to the creepy dreamworld of Paul Bowles’ “The Sheltering Sky”...what to expect?

But the city I was headed to was Marrakech: surely there would at least be camels in the streets and crazy trance dancers in the Djemaa El Fna? Well, yes to both of those, plus much more: the dense and whiffy souks, the elegant Almoravid minaret called the Koutoubia, the elegant French cafes (which will serve you a cold ‘Casablanca’ brand beer if you sit inside, off the street), the absorbing back lanes of the medina where an intensely busy daily life plays out in the streets, the ruins of magnificent palaces, the crumbling walls of the kasbah.
And in the case of Marrakech, all painted with a red brush. The city is often called ‘The Red City’ because both its ancient walls and the modern buildings of the new town outside the old medina are painted a monochromatic ochre-red.

Highight: the great square called Djemma El Fna (pronounce it how you will!) where in the evenings the tourists come to eat at the food stalls belching savoury smoke; and the locals come to promenade in family groups and gather around the story-tellers and fortune-tellers and bands...entertainment like you’ve never seen anywhere else. Trance-dancers moving to the musicians’ beat; snake charmers winding their charges around the tourists’ necks; moneys on leashes and piles and piles of dates and apricots for sale, mounds of oranges ready for juicing.

Highlight: the remains of the great El Badi Palace, built by the Saadian Sultan Ahmad Al-Mansur in the 16th century. Once there were great reflecting pools, and the red walls were clad in marble and gold. But the sultan’s predecessor stripped and wrecked the great palace after his victory over the Sultan. There is a story that the Sultan, surveying his wonderous palace in it’s heyday, asked his jester what he thought of it. The jester is supposed to have wittily replied’ “it will make a wonderful ruin”...as indeed it does.
As an added bonus, one of the remaining palace rooms now houses a precious relic of Islamic religious art: the ancient Minbar of the Koutoubia. If, like me, you first thought that was ‘minibar’, think again...a minbar is a kind of stepped pulpit from which the imam of a mosque presents his pronouncements. This one was built in Cordoba in Spain, in 1139 in the days when the Arabs controlled Andulucia, and is a marvel of intricate carving and inlay work.

Highlight: the Saadian tombs...it took several abortive attempts and a short period of disoriented lost-ness in the backstreets (interesting in itself) to find the tombs, which were just closing...but perseverence prevailed and at last we were able to spend some time in the quiet enclave where the Saadian sultans, their families and courtiers are buried. They date from the same era as the palace (1578-1603), but the warlike successor to the Sultan did not destroy them but walled them off. They were only rediscovered in 1917 by an earlier aerial reconnaisance. As is common for muslim tombs, the resting places are marked only by low-level and low-key marble slabs, decorated in beautiful mosaics.

Highlight: the most beautiful building in Marrakech, the Ben Youssef Medressa, an Islamic school which once housed 800 students. Today you can visit the medressa’s beuatifully-proportioned inner courtyard and reflecting pool, see wonderfully intact mosaic work on the walls, and a couple of upstairs rooms furnished as they would have been when students lived and studied there.

There’s more...the Jardin Marjorelle dating from the 20th century; the souks (where slaves were still sold until the 1920s), the oldest building in Marrakesh, a small kiosk which is an example of the earliest Almoravid architectural features; the herbalists of Marrakech who will sell you a concoction for any aliment you may have; the tagines and mint tea and fire twirlers of the evening restaurants...The Red City is full of fascination. 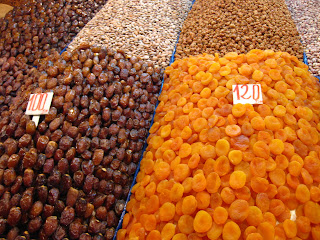 Posted by Annette Freeman at 10:21 AM