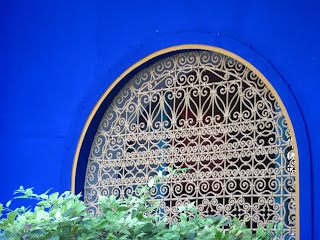 It is said that in the south of Morocco, where the Sahara begins, there was - or maybe, is - a tribe of Blue People . They wrapped their heads in long blue turbans, and their bodies in blue-dyed clothes. The blue dye rubbed off on their skin, leaving them an alluring shade of azure. These are the Taureg people, and whether the whole blue-skin thing is true or not, it is possible in Morocco to see many Berber heads swathed in turbans in gorgeous indigo of various shades.
Our Berber guide Said called his turban a “shesh” and demonstrated how to tie one effectively, including some drapery for protection against dust storms - not a detail to be omitted, since in the Atlas Mountains there are plenty of dust storms. I will skip lightly over the dust-encrusted lunches we ate on the trail...

Apart from people and turbans, there is much beautiful blue in Morocco, particularly in the seaside port of Essaouira (Ess-a-WEER-a). Doors, windows, robes, boats, the sky, the awnings and the shutters...blue is the theme.

Even in the so-called Red City of Marrakech,  in the beautiful Jardin Majorelle a deep indigo colour is almost shocking in its intensity, painted on urns and railings and walls and architectural features around the gardens, contrasting with almost as vivid yellow, green and orange. This garden was built in the 1940s by the French painter Jacques Majorelle; and re-purchased and restored by Yves St Laurent and Pierre Bergé. It is quite easy to spend hours there in its cool shade. So I did. Recommended.

Posted by Annette Freeman at 3:39 PM