Treading the Path of the Gods 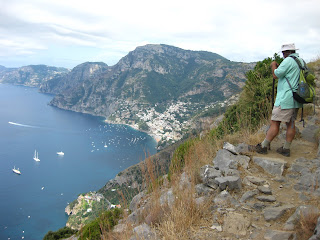 I’ve hiked in a few spectacular places since I figured out that it was do-able - the Himalaya, Patagonia, Kilimanjaro, Tajikistan, the Canadian Rockies - so I hope you’ll consider my opinion authoritative when I say that the hiking on the Amalfi Coast of Italy is right up there with the best of ‘em. In fact, considering that it doesn’t involve the vicissitudes of altitude and yields views for which “spectacular” is far too mild, I should think you want to get your boots on and head for Amalfi right now. 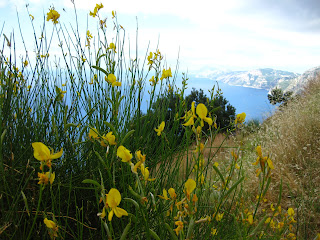 Most of the walks above the coastal towns, in the valleys and across the ridges of the Monte Latari (“Milk Mountains” as the range is called) are day walks, but don’t be thinking they are easy. Depending upon just where you start and finish, you can find yourself climbing hundreds, if not thousands, of those stone steps for which the Coast is so famous. The 1200 down into Positano at the end of the “Path of the Gods”, for example. This is the most well-known of the walks near Amalfi, and takes you from the town of Agerola (which sits on a surprisingly flat(ish) bit of country about halfway up the mountains) and ends in Positano at the end of the aforementioned steps - that is, if you don’t linger too long over lunch in one of the small villages, Nocelle, say, or Montepertuso, and decide to take the bus the rest of the way down.
“The Path of the Gods” is not, in fact, a very strenuous hike (those steps excluded), as it traverses across the mountain range. It follows the ancient paths used by locals in the days before there were roads, to trade their good and visit other villages. You might be surprised to here how recently roads were built on the Coast - the main Amalfi Coast Road, deservedly famous for its hairpin bends and nail-biting views of the sea, dates only from the turn of the 20th century; and local roads in the hills can be only 25 years or so old.
How The Path of the Gods - ‘Sentiero degli Dei’ - was thus christened is open to debate - you might like to join such a discussion over peaches in white wine down on the beach afterwards. But one thing is sure - up there on the airy heights you could easily believe that you were walking with the gods. Today some locals still use it - you might meet a goatherd and his charges, or an old nona tending her patch of vines or collecting fruit from a particularly fine mulberry tree about halfway along.
The real drawcard of this walk is of course the views. Regular readers might recall that I walked this path first last April, in thick fog. Ah well, I wanted the exercise. But of course that meant I had to go back and walk it again when the skies were clear, and the ariel views of the Coast, the towns far below, and the great gorges that split the track here and there made the return visit completely worth the effort.
So follow me on the path of the gods.....it's a story best told in pictures. 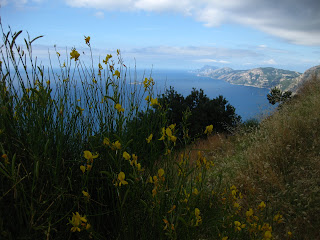 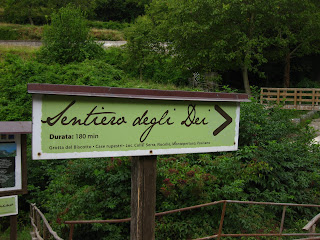 Posted by Annette Freeman at 9:38 PM