Gore Vidal and I have something in common. No, I’m not (yet) a best selling author. But I do love Ravello, that Italian hill town perched spectacularly above the brilliant Amalfi Coast, looking down a little disdainfully on the beach crowd and preferring to enjoy a refined music festival through the summer months. Gore Vidal loved Ravello too, and had a home there, a white house precariously sited on the steep escarpment, and named ‘La Rondinaia’. Read about it and see pictures here.  It seems that a constant stream of literary talent passed through, from Tennesee Williams to Truman Capote to Virginia Woolfe. Vidal only sold La Rondinaia a few years ago. Until then he had come to stay in Ravello every year since 1972, and found inspiration for his writing.

And what’s not to inspire? Ravello’s links to music are even more well established than its links to literature. Every summer since the 1950s the small town has hosted a Music festival, that has become world renowned. The story goes that Wagner, passing through as did so many artistes, compared Ravello to Klingsor’s garden in his ‘Parsifal’ (his last opera), where the seductive Flower Maidens dance their enticing dance. It seems to me rather a slim thread upon which to hang the rationale for entire long-running music festival, but hey - do we really need an excuse anyway?

This year’s Ravello Festival (the website is here) included musicians from Philip Glass to The Buena Vista Social Club (what’s left of it), and man orchestras, singers and musicians in between. Every festival features a Wagner concert - it’s a kind of ritual - and this year I attended. We had the orchestra of the Teatro San Carlo, the famous Opera House in Naples, conducted by Michel Tabachnik, and soprano Martina Serafin. The performers did an excellent job, especially of holding down their flapping musical scores with clothes pegs. The music tended to fly away in the slight breeze - we were, you see, outdoors in the belvedere of the Villa Rufulo, a wonderful building with foundations that go back to the Romans.

The Villa Rufulo is not the only spectacular venue in Ravello. Bolstered by the success of the Music festival, this tiny hillside village has, somewhat improbably, acquired a lovely auditorium designed by Oscar Niemeyer, the Brazilian architect known for designing Brasilia, being 104 years old, and building sweeping white structures. The 10 year old Oscar Niemeyer Auditorium in Ravello is no exception, and sits somewhat incongruously amongst the traditional homes and vineyards of the Amalfi Coast, visible from far away at sea or along the Coast road. But it is a fascinating and well-designed building, making the most of the steep, narrow site, tucking the seating into the hillside and projecting the stage out on cantilevers. Inside, defying the usual auditorium interior, great windows open to the mountains, and smaller ones to the sea and the sky. I heard a lovely, quiet, technically brilliant, soothing guitar concert there one Sunday morning during the Festival. 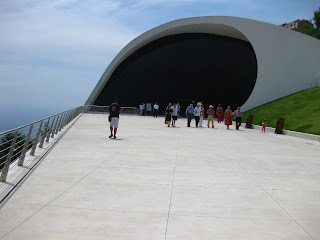 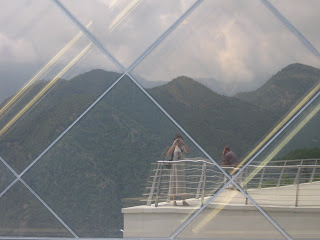 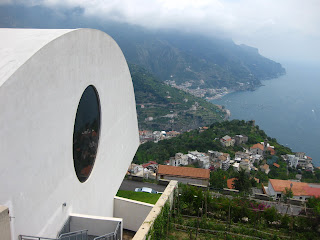 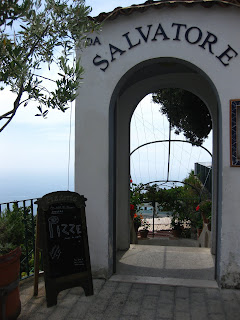 I could also tell you about the delightful piazza of Ravello, with its complement of cafes and bars and an interesting duomo, or about the Villa Cimbrone, once the home of an eccentric English aristocrat with another bevy of famous guests and now a gorgeous hotel. I could mention the incredible views (the best on the Amalfi Coast, IMHO, and that is really saying something), or the many walks you could do around the hills, towards Scala and Pontone and Atrani, or down to Minori. Or I could go straight to the most important thing you need to know about Ravello: where to get the greatest pizza on the Coast: follow the steps down to Salvatore’s, but keep going past the swank restaurant, down to the pizzeria below, with red check table cloths and great smells. Eat nella familglia - and enjoy the view.


Posted by Annette Freeman at 1:02 AM