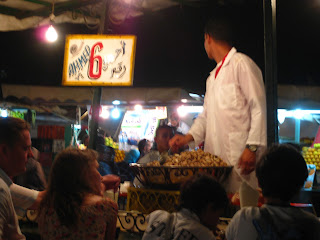 In the world’s great cities, are many great squares, large and small: think Times Square, Tianamin Square, Trafalgar Square, the exquisite Grand Place in Brussels or Place de Voges in Paris. In Marrakech, it’s the Place Djemaa El Fna (spelt in a variety of ways, none of which assist in correctly pronouncing the name). It is the focus of the old medina, the original walled city heart.

Along one side of Djemma El Fna is the great souk of Marrakech, where slaves were still sold until the early 20th century; and where today you can buy leather goods, brilliantly coloured clothing, brass pots and silver teapots, jewellery, trinkets, baskets, fresh mint and powdered eye of newt (I made up that last one, but in the traditional pharmacies of the souk, it is probably true).

On another route out of the great square - it’s huge - there is a line of dozens and dozens of horse and carriage outfits, ready to take your tourist dollar (or, rather, dirham) for a spin around the medina; and beyond them, the square Almoravid-era tower of the Koutoubia Mosque.

But it is in the great Place itself that the real interest lies. In the evenings, clouds of steam and smoke begin to rise, so that from far away you conclude that something is on fire. But it’s just the food stalls firing up for the evening. Tourists and locals mingle on the white painted benches to eat the street stall food (your blogger was not amongst them, I hasten to add). Waggons of dried fruit are piled up for sale; and juice purveyors will squeeze you oranges and lemons while you wait.

Away from the stalls, you will see a variety of entertainments: monkeys on chains being encouraged to dance; snakes being draped about necks (again, something your blogger avoided). But moving further away from those looking for tourist-trade, you’ll find the entertainment for the locals, who come out to Djemaa El Fna in the evenings to promenade and see what’s going on, as families do in city squares the world over. There are musical bands of Arabic instrumentalists. There are be-robed ladies painting henna designs on hands and wrists. There are trance-dancers whirling to drum beats. But most interesting are the storytellers - no matter that they are telling their stories in Arabic. Watch their faces and those of their audience, and will enjoy the thrill of the story even without knowing what is going on.

In the daytime, you hurry across the great expanse of the square on your way to the souk or the tanneries or the medressa, clutching your bag and worrying about pickpockets. But at night you’re transported into an exotic North African world and allowed a glimpse of some of the things that must have inspired Scheherazade. Take a pocketful of dirham coins to tip the performers and enjoy the hot African night.

Postscript: Djemaa El Fna was the site of a bombing in April 2011when a cafe on the edge of the square, frequented by tourists, was blown up and lives lost. The cafe - not yet deleted from the guide books - remains boarded up, a grim reminder; but thankfully the bombing seems to have been a one-off and not a sign of terrible times for the magnificent and exotic Djemaa El Fna and its people.

Posted by Annette Freeman at 1:02 AM