Just back from the Haymarket Theatre and one of the current hot ticket items in London: ‘One Man. Two Guvnors.’ There have been rave reviews, tickets have been hard to get, I've seen morning queues outside the theatre in the freezing cold waiting for returns. I thought I should check it out.

The program, and the show itself, makes a claim to be in the long tradition begun by Commedia dell’Arte, through Restoration comedy, melodrama, music hall, vaudeville, circus and pantomime. It is written by Richard Bean, and is based on a play written in 1746 by an Italian playwright named Carlo Goldoni.

The principal plot point is a servant who acquires two separate masters, with a view to profit, and needs to keep the existence of each a secret from the other. So far, so potentially funny. The London production relies very heavily on physical comedy, and that rather butt-clenching and often boring business of bringing up members of the audience onto the stage (though - spoiler alert - in this case they’re plants). It also has a full complement of not merely risque but out-and-out crude jokes, and even a fart. Plus a good dose of xenophobic references, principally to Australia, though Norway (?) and Japan (??) cop it too. 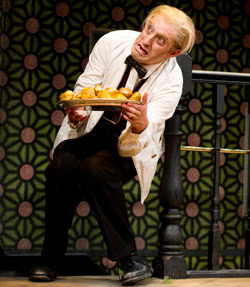 Ah, was it the repeated anti-Australia jokes (which elicited hearty roars from the audience) that put me off? Or was it that people falling down stairs and having their faces smashed by doors and so on are about as funny as ‘Funniest Home Videos’, that is, not at all? The plot was as complicated as you’d expect from a play based on an 18th century play - they are famously intricate and not always easy to follow. We even had that old pantomime staple, the ‘kitchen scene’, in this case waiters serving food, allowing for those, er, hilarious gags of food-throwing, soup-spilling and setting something on fire. In the grand tradition of farce, doors were repeatedly opened and shut while the characters (one in disguise) dashed in and out just missing each other by moments. As yes, all the ingredients were there.

I’m still not entirely sure why I didn’t laugh much. I used to laugh at British comedy - well, actually I didn’t laugh much at Benny Hill, but I did laugh at Frankie Howard, and at ‘On The Buses’, and of course at ‘Ab Fab’. Tonight’s theatre program has a short analysis of that unique genre, “British Comedy”, and says:

“The British have never really lost their relish for smut...Sometimes British humour is summed up as simply ‘pee-pee ca-ca’ and it cannot be denied that we have always had a fascination with bodily functions...”


Do I actually detect a note of pride?

I mustn’t leave this luke-warm review without complimenting the actors. This kind of stage business is difficult to do, especially falling down stairs convincingly and repeatedly. And several members of the cast over-played their characters sufficiently to be actually funny. That can only be a good thing for a comedy, don’t you think?

Here's Michael Billington's review in the Guardian of the show when it was at The Adelphi Theatre with James Corden in the main role (he has been replaced now by Owain Arthur). You will note that the reviewer "especially enjoyed Rooper's dismay at the prospect of exile to Australia and 'a terrible outdoorsie life, sustained by lager, barbecues and opera'" and suspects "you would had to have had a humour by-pass not to enjoy it."

Vive la difference. I don't even understand that anti-Australia joke. let me know if you do.

It seems also that the show is moving to Broadway, and Billington predicts that it will knock 'em dead. I haven't heard of plans to send it to Sydney. 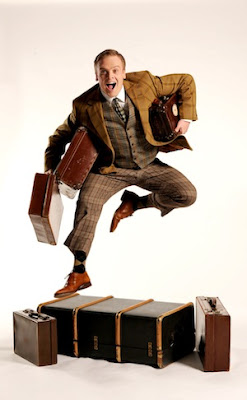 Posted by Annette Freeman at 11:06 PM

Email ThisBlogThis!Share to TwitterShare to FacebookShare to Pinterest
Labels: The British, Theatre