There’s no doubt about it - London loves its theatre. I never fail to be impressed by the buzz in the West End on any night of the week (except maybe Sundays, when most theatres are dark) - London lights up after dark, literally and figuratively. The place is stuffed full of small Victorian and Georgian theatres, most restored to their original splendour, and all with full or close-to-full houses six night a week. And that’s before we even begin to consider the off-West End theatres that are out there in the suburbs: The Bush, The Tricycle, The Royal Court, The Soho, theatres at Hampstead and Shoreditch and East London, and ....well, everywhere, it seems. Any room above a pub will do. From the generously well-funded National Theatre putting on substantial production at its Brutalist home on Southbank, to the cosseting of new writers at the Royal Court and Soho, London is all about theatre.


And what do London playwrights have to say about their own theatres? Here’s a snippet about The National from David Eldridge’s play ‘In Basildon’, currently playing at The Royal Court. The speaker is an idealistic young playwright:

I once went to the National Theatre. I looked at it and I thought I can’t set foot in that place. I thought it’s not a national theatre, it’s a middle-class theatre. And the liberal middle class, at that. I walked away. And broke into a run. Like Maupassant from the Eiffel Tower. Horrified. Not just at the ugliness of the building. It made my head hurt. The thought of all those middle-class people playing dress-up.

Since my last round-up of “what I have been seeing” was - eek! - last July, I thought I’d attempt a list, and a one sentence review of each performance I’ve seen. Just as a little taster of London Theatreland.

‘The Tempest’, Shakespeare, The Haymarket (with Ralph Fiennes).
Disappointing - Fiennes wooden and unengaging, the production not much better than a high-school musical.
Read a review.

‘South Pacific’, Rogers and Hammerstein, at The Barbican.
A fun evening mainly because of the dear old songs.
Read a review.

‘The Tempest’, Shakespeare, by Jericho House Theatre Group, in St Giles Cripplegate Church.
Successfully site-specific, cut-down version with some confusing sex-changes for some characters and an overlay of Israeli-Palestinian politics.
Read a review.


’13’, by Mike Bartlett, at The National.
As you'll see from the review below if you click, this one provoked excited reactions, which makes it successful, I guess. I found it very interesting, if a little over-staged.
Read a review.


‘Jerusalem’, by Jez Butterworth, at The Apollo, with Mark Rylance.
The hottest play ticket in town, and has been for ages, because Mark Rylance is a genius. The play is utterly English, and don't even say that you think it is just a play about trailer-trash (*oops!*)
Read a review. 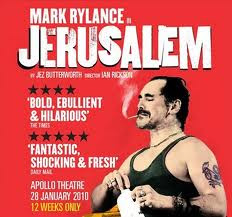 ‘Audience’ by Tim Crouch, at Soho Theatre.
Most confronting bit of theatre I've seen since...well, since the Komische Oper in Berlin. No sitting comfortably through this one, which involves everyone in the, er, audience and makes them complicit in some rather ghastly goings-on.
Read a review.

‘Masterclass’ by Terrance McNally, at The Vaudeville Theatre (with Tyne Daley).
Tyne Daley was brilliant as Maria Callas. I loved it, though the reviewer thought it was anti-opera. (?)
Read a review.

Hub Night at The Soho Theatre - six short in-progress excerpts read by a company of actors in a cabaret style space.
Really interesting way to spend an evening - some great stuff coming from the (usually young) writers. (There's a bit of age-ism in these "nurture new writing" enterprises).
Read about the Soho Hub.

‘Comedy of Errors’, Shakespeare, at The National (with Lenny Henry).
Absolutely loved this - Shakespeare is completely timeless, and I'm always astonished how well he transposes to modern times. Lenny Henry was excellent, and the rest of the man characters equally brill.
Read a review.

‘Hay Fever’ by Noel Coward, at Noel Coward Theatre.
At least the English can laugh at their "upper classes" - plenty of exaggerated characters in this one. I especially liked that it is a play about an actress acting up.
Read a review.

‘Noises Off’  by Michael Frayn, at The Old Vic.
Clever farce about a farce; lots of difficult physical comedy (actors have been carted off in ambulances in the past, apparently); though perhaps the cast could have been a bit stronger.
Read a review.

‘One Man. Two Guvnors.’ by Richard Bean at The Haymarket.
This one passed me right by. Didn't like it. Though it's extremely popular.
Read my comments! 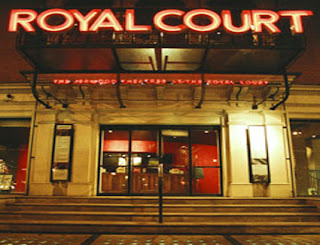 ‘In Basildon’ by David Eldridge at The Royal Court.
Very good - again, the British on their classes. *sigh* This time the working-class who moved from the East End to Essex for a better life.
Read a review.

‘Sweeney Todd’ by Stephen Sondheim at The Adelphi, (with Michael & Imelda Staunton).
Big production in a small theatre, very well done and acted. Not often real creepiness is done well.
Read a review.

‘Goodbye To All That’ by Luke Norris at The Royal Court.
Part of a young playwright's festival - play by a 25 year old about a love triangle in old age. It's really quite brilliant.
Read a review.

Posted by Annette Freeman at 8:53 PM