The Dome of St Paul’s

The dome of St. Paul's Cathedral  forms one of those iconic views of London that stands out in a city whose architecture is otherwise rather low key. After the dreadful flattening of so much of the city in various vagaries of history, including the Great Fire of 1666 and the WWII Blitz, it has always been a bit of a struggle for London to rise, architecturally speaking, from the (literal) ashes. St Paul’s is a survivor, in a way, of both those significant events. There has been a church on the site since 604 - five of them. The immediate predecessor to the present building, Old St Paul’s, went up in smoke in 1666 along with two-thirds of the city. The current Cathedral was built defiantly between 1675 - 1711.

The Cathedral also survived the Blitz, more or less intact, though two bombs did hit it, causing a great deal of destruction. But the great dome held.


As most people know, the architect of St Paul’s was Christopher Wren, a prolific and forward-thinking chap. He was one of the first architects to work in what we’d recognise as the ‘modern’ way. Previously, builders of buildings came to their profession via their chosen crafts - masons, carpenters, metal-workers, etc. Wren didn’t take that path - he approached buildings from an overall design perspective. He was also very strong on what we’d call urban planning, and on interior design. An all-rounder amongst architects.

The dome itself is unique amongst English cathedrals - it sits atop the intersection of the arms of the floor-plan cross - the long nave and short transepts. It is 111.3 metres high, and one of the largest cathedral domes in the world. It weighs about 65,000 tons. Underneath the dome is an altar where the Eucharist is celebrated, and the congregation gathers. The dome is topped with a ball and cross in blazing gold. 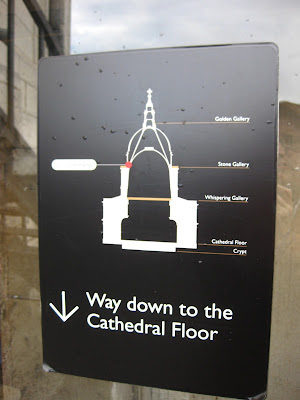 Interestingly, the dome of St Paul’s has what we might call a false ceiling: the inner dome you see if you are standing inside and looking up is a lower, internal dome. The outer dome you see from the churchyard or street is much higher. In between is a cone-like structure holding the two together. The reason? A tall dome was called for outside so it could be seen across the city and make a great well-proportioned monument. But inside, it would have been too tall for the people to see its internal surfaces, which are decorated with paintings. It would have been out of human-proportion, if you like. Clever, eh?


There are three gallery levels in the dome - the famous Whispering Gallery runs around the interior. It has what the guide book describes as “a charming acoustical quirk” which makes a whisper against its wall audible on the other side. The Stone Gallery encircles the outside of the dome higher up, and gives views across London. Even higher still is the Golden Gallery, a tiny walkway just under the golden ball and cross on top of the dome.

There are 528 steps to get from the cathedral floor to the Golden Gallery. Some of the time the climb is clearly within the internal cone structure, on spiral wrought iron stairs.

The choir and upper nave of St Paul’s is absolutely thick with rich and ornate mosaics - beautiful and colourful things. It is said that Wren wanted to decorate the interior of his dome with mosaics too, but the bean-counters opted for monochrome paintings. The paintings there today are reproductions from 1853 - the originals, painted by James Thornhill in 1715-1719, deteriorated “as a result of the British climate and London smog” (per the guide book). The paintings depict adventures in the life of St Paul, that chap to whom the New Testament and indeed the whole of Christianity owes so much - even, arguably, its very existence. But I don’t have time to go into St Paul right now...a story for another day.

The interior of St Paul’s cathedral is an extraordinary place, but visitors are not permitted to take photographs. I did find one public domain photo of the dome. For the rest, enjoy the views from the high galleries. Yes, I climbed the 528 steps.

Posted by Annette Freeman at 12:38 PM