Farewell to the Theatre 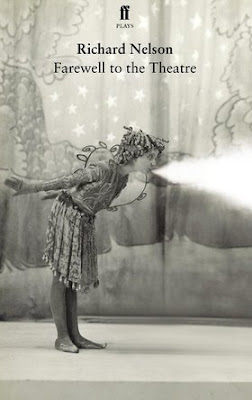 Gasp! No more theatre for your blogger? Calm down - that’s not what the title means. It is, rather, the name of a play I went to see at Hampstead Theatre recently. This was a ‘new’ theatre for me, and a very nice little space it is too - only one tube stop from St Johns Wood, or a short bus ride. There has been a theatre on this site for many years, but the building is recent. Every suburb has its theatre in London - a bit like Chinese restaurants in Australian towns.

But back to the play, which is by Richard Nelson (an American who has worked extensively in the Uk and the USA), and is about an actor, dramatist and  theatre director named Harley Granville Barker (1877 - 1946). The information below comes from the program, and an article in it written by David Jones.

The name wasn’t familiar to me, and you too may be as ignorant as I. So here’s a quick potted bio:  Barker was an acclaimed actor in his youth, performing many leading roles for George Bernard Shaw. However, he regarded acting as merely the door by which he entered the theatre, and soon he couldn’t be persuaded to take on any more roles. He wrote a number of plays described as “urbane, intelligent, detailed and leisurely in their pace”. The fame of his writing suffered from being in the shadow of Shaw - they’ve been described as ‘Shaw-and-water’. But it was as a director that Barker seems to have more or less single-handedly dragged the theatre from the excesses of Victorian times into the modern-day theatre we recognise.

The Victorian culture was one where star actors looked after their own parts, “thank you very much”. Barker was probably the first genuine director in British theatre, suggesting that actors could and should discuss and explore their parts. He insisted that “the text is worth trusting” and that the piece should have an overall cohesiveness imposed by one mind. His background as an actor helped him have a deep understanding of how actors work.

His biggest innovations were in Shakespeare:

What he did was very simple: he restored the text, whittled away by centuries of actor-managers trying to highlight their parts. He threw out cumbersome scenery that had been slowing the plays to a standstill since the 18th century. He restored the apron stage, and direct contact between actors and audience. He re-established the fluid, continuous action essential to the narrative. he developed a fast, light style of verse-speaking whose rapidity left his first audiences gasping. And seeing the play as a while, as he did with his modern productions, he succeeded in bringing Shakespeare into the twentieth century.

But what of the play? It takes a specific moment in the life of Barker, as WWI is breaking out. He is at a small college int he USA, his first marriage is on the rocks, the college is producing a play that night...the themes are about alienation - from country, from personal relationships, and, well, from the theatre. The production was beautifully designed - one of the loveliest, low-key but effective, sets I’ve seen (designer: Hildegard Bechtler). The characters were beautifully drawn and the piece was engrossing. Ben Chaplin played Harley Granville-Barker. Roger Michell directed.

But let me leave you with the comments of the writer, Richard Nelson, on theatre itself:

Looking at theatre is not an introspective exercise I think; because theatre’s place in the world, it’s place in society, is neither introspective nor solipsistic. Theatre is very important to the history of man, and to man’s future. As Harley says in the play, it is the only artistic art form that uses the entire live human being as its expression. By that I think he means that theatre is a totally and profoundly human art form. It is live human being relating to live human being in the same room. The same space. And because of this very elemental nature of theatre, it carries with it, I believe, a world view, and that view is humanistic.