Good Friday in London was a chilly April day (3 degrees C). At 10 am I sat under the lofty and ornate dome of St Paul’s Cathedral, undoubtedly one of the Christian world’s most awe-inspiring architectural edifices. Outside, the tents of the Occupy Movement had been long since tidied away. During the next hour the Choir and Ministers of St Paul’s would celebrate a ritual they entitled ‘Mattins and The Litany in Procession’. 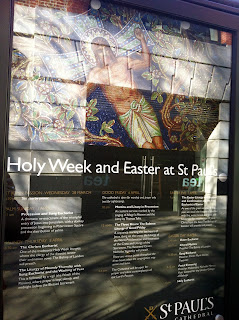 Of course, since it’s Good Friday, I can’t expect this to be upbeat. Christ doesn’t rise until Sunday. Today is about rituals remembering his death. The solemn and, frankly, visceral lamentations were other-worldly and a bit unnerving. The Choir was composed solely of male voices (or was there one lone woman?) - half of them boy trebles. These little chaps were dressed in black cassocks relieved by whiter-than-white ruffles around their throats. Some of them were so small they could barely peek above the bookrests in the choir stalls. Their voices were heavenly. One small soloist, in particular, has a voice you wouldn’t believe could come from a human throat. I’m trying to avoid the cliche “angelic”, but it’s difficult.

And so we come to The Lamentation. The Order of Service tells me that the words are from the Lamentations of Jeremiah, and the beautiful music - sung unaccompanied like all the day’s choral music - is by one Edward Bairstow (1874 - 1946). Now I can’t say that I have previously taken much notice of Jeremiah, but he seems to have been both very distraught and at the same time a very talented poet. Note these moving lines that the angelic little boys sang:


It is from Jeremiah’s sad harangues - mostly about the Babylonians defeating the Jewish people - that we have inherited the word “jeremiad”, meaning "a lamentation; mournful complaint" or "a cautionary or angry harangue."


I was so impressed with the Mattins that I came back for more, though I hadn’t intended to. In the afternoon St Paul’s moved on to ‘The Three Hours: The Solemn Liturgy of Good Friday’. The rituals began at noon as the bells tolled (and the London tour buses rolled by). The Ministers hauled a rough wooden cross from the forecourt, up the steps of the cathedral and through the great West Door, which is opened only on such special occasions. The Choir processed and sang, and the people streamed in after them, managing to fill most of the 2,500 chairs in the nave. The centrepiece of the first hour was - I can only call it this - a ‘musical re-enactment’ of Christ’s Passion, taken from John’s Gospel. Three singing clergy played Narrator (baritone), Pontius Pilate (tenor) and Christ (a bass). The Choir played the role of the crowd, the soldiers and the priests baying for the crucifixion. It was extremely eerie and extremely moving. I can’t think why someone hasn’t used this story in an opera - all the elements are there. The music was by Tomás Luis de Victoria (1548-1611).

Having briefly got ourselves to the New Testament (where, let’s face it, all the Easter action is) we then went back to the Psalms and spent and hour and a half in contemplation, reading, and a little Bach on the organ. Then it was time for the Choir to return, and they helped us sing that old favourite from Alexander’s Hymnal:

There is a green hill far away,
Without a city wall...


It made me think of my visit to the Christian Quarter in Old Jerusalem, where Calvary is claimed to be a small and unlikely rock now inside a gloomy cathedral. It has a small cavity where the cross is said to have perched, and pilgrims jostle to kiss it. It’s worlds apart from a ‘green hill far away’ and in my opinion rather a tall story, but I digress.

St Paul's inside is a stunningly beautiful space. As Alain de Botton acknowledges in his new book "Religion for Atheists":

In certain cathedrals that are vast in scale or hewn out of massive, antique-looking stones...we may feel that we are being introduced, with unusual and beguiling grace, to a not unpleasant sense of our own insignificance.

But I digress again...it was that kind of afternoon, one for thought...

The Choir next led ‘The Reproaches’, and these rivalled Jeremiah’s Lamentations for agony and angst. The Order of Service doesn’t tell me where the words come from, but the music used was fairly recently composed by one John Sanders (1933 - 2003). This is a sample:

O my people, what have I done to you?
How have I offended you? Answer me!

I led you out of Egypt, from slavery to freedom,
but you led your Saviour to the cross...

I opened the sea before you,
but you opened my side with a spear.
I led you on your way in a pillar of cloud,
but you led me to Pilate’s court...

...and more of the same, exquisitely sung by the men and boys.

Well, since this is a generally timid blog, and the prayers later on did include a wish for better understanding between Jewish and Christian people, I won’t discuss the fairly obvious issues raised by ‘The Reproaches’, which I am sure are arguably universal but pretty clearly aren’t.

The services ended with the story of Joseph of Arimathea asking for the body of Jesus and placing it in a tomb. And so we wait for the happy news on Sunday morning....

At this time last year I was in the small Sicilian town of Trapani, watching agog the endless procession of effigies and dirge-playing bands with which the Sicilians of that town mark the Easter Passion. I have to say that the respectable clergy of St Paul’s Cathedral manage a similarly moving ritual for Good Friday.


Posted by Annette Freeman at 9:34 PM