Politics in the Theatre 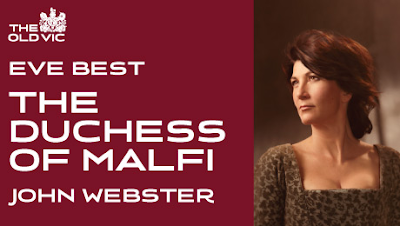 Another big week of theatre-going, this time with a prominent political theme.

First up was that fun Jacobean piece, ‘The Duchess of Malfi’, where the shenanigans and power plays see just about everyone dying graphically by the end. Written in the early 17th century (just after Shakespeare’s heyday) by John Webster, the play is set in the dying days of the Republic of Amalfi - which, as attentive readers of this blog might recall, was in it time one of the four great maritime republics, along with Genoa, Pisa and Venice. The Duchess of the title has the audacity to marry her steward, a common servant, and both of them - and their three children - thus fall foul of her brutal brothers, who consider themselves dishonoured (and disinherited). A kind of Jacobean honour killing. The Duchess (played in a disconcertingly laid back manner by Eve Best - who played Wallis Simpson in 'The King's Speech' film) is garroted, very slowly, on stage. That’s after she’s tortured by her mad-as-a-cut-snake brother with waxworks effigies of her dead husband and son. Ah yes, all good stuff.

Here's an explanation which may be clearer than mine.
But wait - the set! It has to be the single most beautiful theatre set I’ve ever seen, and on the not-large stage of The Old Vic. Laurels and accolades to the designer, Soutra Gilmour, and the lighting designer, James Farncombe. Think lofty Escher-like arches, smoky distances, light falling weakly through high clerestory windows - and incense. One woman behind me said as she sat down “Wot’s that awwwful smell?” It was divine.

Then off the next night to The National, the Lyttleton Theatre this time, to see a physical theatre piece by a troupe called DV8. The physical part of the performance, on a carefully-sprung parquetry stage, was immaculate. Very clever and, though odd, mesmerising. The title was “Can We Talk About This?” and the subject was the failure of multiculturalism in contemporary Britain. Yes, honour killings again, and rather confronting stuff it was too. Here's one coherent description:

From the 1989 book burnings of Salman Rushdie’s The Satanic Verses, to the murder of filmmaker Theo Van Gogh and the controversy of the ‘Muhammad cartoons’ in 2005, DV8’s new production examines how these events have reflected and influenced multicultural policies, freedom of speech and censorship. Can We Talk About This? is based on real voices and interviews, with leading figures from across the religious, political, cultural and social spectrum, including MPs, high profile authors and journalists. (source)

You kept kind of wanting to find some reason to think they were being one-sided so that you didn’t have to accept the awfulness of what they were saying. Every word was taken verbatim from interviews. It was all too much for one audience member who - a first in my experience of English theatre-going - yelled at the performers that it was all “Islamophobe bullshit!” and stomped out. The performers on stage at the time were shocked into stopping, but soon picked up the beat again and continued. The show must go on, no matter how awful the subject matter. Just ask the Duchess of Amalfi. Oh, wait - she’s dead.

I looked up a review for you - here it is, reviewer didn't like it much, seems upset - and read at the end these fateful words: "There is a protest at one point by the most glaring "plant" you have ever encountered in a theatre." Uh-oh! So it was a plant! I suspected that British theatre-goers were unlikely to react like that...

The following evening was at The Soho, for the opening night of “A Walk On Part”, a dramatisation of the political diaries of Chris Mullin, who was a junior ranking minister in the Blair Labour governments. This was very well done - I hung on every word. Mullin was played by one actor, John Hodgkinson, who did a brilliant job, not only of remembering all those lines but also of portraying a genial and idealistic man moving from the enthusiasm of his first days in government to anger and despair towards the end. All the other [arts - dozens of them - were played by a company of four. I know it doesn’t sound likely, but it was very easy to follow. I learnt a lot about the rise and fall of New Labour, and the gentle humour and good grace of Mr Chris Mullin was a treat.

And I must repeat one of the funniest bits: a female minister is having an audience with the Queen. Her pager goes off in her bag, and as she reaches to turn it off she looks at whose calling. Her Majesty enquires: “Is it someone important?”

And so to the last theatrical outing for the week: a pensioners’ matinee at the Harold Pinter Theatre, a performance of Alan Ayckbourne’s “Absent Friends”. You’d think this might be a bit of an antidote to all the heavy politics this week, but in a domestic sort of way it was just as political. It’s 1975, or thereabouts, as the highly detailed and decorated set informs us. Five friends gather to have afternoon tea with a sixth, who is a nerdy type who they all thought would never marry. Then he got engaged, and his fiance sadly drowned. They think they are the lucky ones, superior, but he turns out to be startlingly well-balanced while their lives are all in a mess. When I say it like that, it sounds dire and sombre, which the underlying story really is. But the presentation is full of laughs, as such situation comedies are meant to be. Something about ‘comic relief’ I think...Favourite bit? The baby, who was mistakenly called ‘Walter’ by one visitor. 'His name is WAYNE’, said his mother.

Ayckbourne, who is in his seventies and still writing plays (about 75 of them so far) , is said to have been concerned that in this one (written in the 1970s), nothing happens. It’s just about people sitting around talking. And indeed it is. Which gives so much more vim to the moment when she pours cream all over his head. You had to be there.

Posted by Annette Freeman at 10:00 AM