There’s nothing like finding something really old, standing in a field. I mean really, really old - try 3500 BC. It was a cold and windy day, and wet to boot, but the quick sprint along a muddy lane between the sheep fields of western Wales paid off. I found Pentre Ifan, a ground of impressive standing stones said to be the remnants of the entrance to an ancient burial chamber. The name means "Ivan's Village".

Pentre Ifan is the best know megalithic monument in Wales, and certainly the highest. According to the interpretative sign, which is all I have to go on, the stones form the remains of the entrance to a chambered tomb for communal burial, which would have been used numerous times before being sealed up for good. The sign also admits that not much has been found in the way of ‘remains’, other than some flint tools and Neolithic pottery, but the sign seems to be sticking to its interpretation. 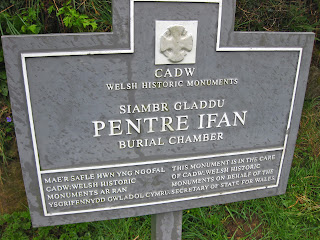 The enormous capstone of the remaining ‘doorway’ is 17 feet long and probably weighs over 16 tons; and it is supported by just three standing stones. The site was excavated in 1936 and again in 1958, and a large area was found behind the stones which is assumed to have been used for these communal burials. They also found that the front entrance seemed to have been packed solid with carefully placed stones, which, as the sign coyly puts it, “must have caused difficulties each time there was a new burial.” Indeed.

Forgive a trace of scepticism about these Neolithic musings...we can never know. And that is, really, part of the intriguing attraction of these weird and slightly spooky sites. The peoples who built them not only figured out how to lift a 16 ton capstone up onto the standing stones, but they also had a good reason to do it. The locals say that fairies live here. That could be as true as anything else about the stones.

Chariots of the Gods?

Posted by Annette Freeman at 12:51 PM