A monolithic pile of stone, 900 years old, ruined, desecrated and abandoned: not a likely place to inspire words like ‘airy’, ‘serene’, ‘heart-filling’, ‘moving’. But that’s Tintern Abbey - it’s been impressing visitors for centuries.

For an Abbey with no roof and only the bare skeleton of stonework windows, and grass where the stone aisles and floors would once have been, it is remarkably easy to imagine the ‘white monks’ of the Cistercian Order appearing for their prayers. Here they come filing in from their dormitory down the stairs in the North Transept, headed for the choir, a square area marked by four monolithic pillars. It might be 2 am. They prayed around the clock, almost, with up to eight services a day. There was however time to eat in the refectory in the monastery complex, time to reflect in the cloisters, time to supervise the lay brothers who worked the fields. There was no heating, no luxury, no decoration, no frivolity. Presumably there were compensations in such a life.

The ruin of the Abbey followed its break-up by Thomas Cromwell and Henry VIII. It was founded in 1131, and after 400 years of quiet contemplation, surrendered to the King in 1536. Anything of value was stripped away, including the lead on the roof. The lands were given to a local aristocrat. The monks were handed a small payment and dispersed thither and yon. The great stone arches were left to their own devices.

And (despite a sad period in the 1560s when local ironworks encroached on the Abbey, and the desperately poor people who worked them lived in hovels amongst the ruins) the stones of Tintern Abbey have transcended the vision of their original builders and morphed into something else. Like the Parthenon atop Athen’s Acropolis, we’ll never see these ruins as they were originally built, and we probably don’t want to; because that would entail losing what they’ve become. 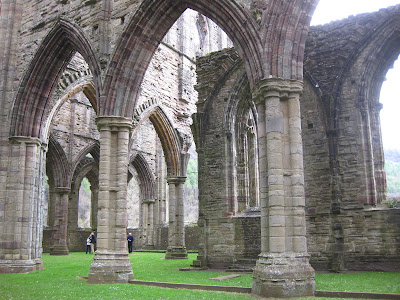 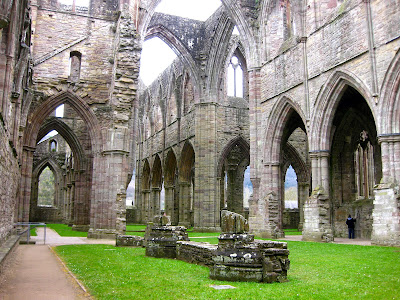 Today the wooded hills of the Wye Valley are framed by the great arches of Tintern. The nave, the crossing and the presbytery, which would have been separate spaces in the original church, are now one long, lofty, open-air space, floored with green turf - exquisitely beautiful and uplifting. The ancient stone walls, arches, doorways and windows frame nothing but the air; but in the process they define an architectural space of beautiful proportions which in some mysterious way speaks eloquently to just about everyone.

From afar, the abbey sits solidly in the green valley of Tintern, anchored and immoveable despite the storms of history which have battered it. From afar, it looks like the floating glass cathedral of ‘Oscar & Lucinda’, which seems impossible for a stone monolith, but isn’t. From afar, it produces a gasp when it first comes into view.

In Victorian times the abbey was festooned with picturesque ivy and foliage sprouted from the rough stones. Turner painted it that way. Today it has been touched by the severe hand of twentieth-century conservation - it might be possible to regret that, especially if you have a Romantic outlook (and are impressed by that temple in Angkor Wat which has been left entwined in tree roots and jungle vines). But of course we don’t want Tintern Abbey to fall down. One day it will, most probably - subside into the next stage of its life cycle. But for now it is robustly shored up with metal girders and someone mows the lawns in the nave and transepts.

Tintern Abbey has been made famous by Wordsworth’s poem wordily entitled: “Lines Written a Few Miles Above Tintern Abbey, On Revisiting The Banks of The Wye During a Tour”, July 13, 1798. Since the title is so unwieldy, it has often been shortened to “Tintern Abbey”, so it’s a bit disconcerting to discover, upon seeking out the poem, that it says nothing at all about the Abbey. It does wax lyrical about the Wye Valley:

How oft, in spirit, have I turned to thee


Wordsworth was 28 years old when he composed this, and had already perfected his turgid style. The long poem was written while on a hiking tour with his sister Dorothy. He had been to Tintern (it was becoming a popular tourist attraction even then) and hiked about in the hills above the Wye five years earlier. Back then, Wordsworth had recently returned from France, where  the French had just begun using the guillotine. He'd had a torrid affair with a Frenchwoman named Annette, resulting in a daughter. He had abandoned them; England and France were at war; he was a tad upset. The Wye Valley soothed him, and five years later he penned his gratitude. But of Tintern Abbey - we don’t know what he thought.

If you want to find the Abbey for yourself, seek the border of England and Wales. The Abbey stands on the Welsh side of the River Wye, in Monmouthshire - the other bank is Gloucestershire. I also recommend taking with you some Welsh music - the male voices and choirs for which the country is famous. Sit on the greensward and listen to the echoes of Welshmen past in the voices of Welshmen present, and contemplate the airy stones of Tintern. Perhaps you might even write a poem.

...or perhaps the sound of some Gregorian Monks' chants...with views of Tintern...


Turner image from: http://www.bbc.co.uk/arts/apictureofbritain/inspiration/region/wales/leaf_tate_06.shtml
Posted by Annette Freeman at 6:06 PM