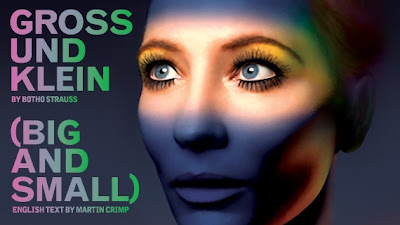 The program for the play ‘Gross und Klien’, or ‘Big and Small’ includes an interview with the director Benedict Andrews. He says that when he first read this 1978 German surrealist play by Botho Strauss:

I was thrilled by the seemingly fragmented, de-centred dramaturgy...The slow motion detonation of character and narrative...The Existential puzzle...Now I’m interested in how the play offers a radical perspective on society. Lotte’s odyssey confronts us with the limits of rational order. She is a stranger in her own culture. A fool and a saint dancing on the rim of the abyss.


Which is a very poetic way of telling us that is is a three-hour long, ‘difficult’, story-less play  that only a brave company would bring to The Barbican Theatre.


Let me reassure you: there is only one very good reason to see this play, and that reason is CATE BLANCHETT. The woman is absolutely luminous. As the central character Lotte - really the only linking thread of the eight-episode ‘story’ - Blanchett is completely absorbing. At times she actually helps us get a glimpse of what this difficult play might be ‘about’. Without actually being able to articulate why, you just feel you know what Lotte’s issues are. It’s extraordinary, possibly the best theatre I’ve seen in years, and Cate Blanchett is almost single-handedly responsible for that.

Which is not to detract from a very beautiful, spare and clever set design (by Johannes Schutz), the direction of Benedict Andrews, and the efforts of the other members of the Sydney Theatre Company. But really, if you’re going to go onstage with Cate Blanchett, expect to be an also-ran. She’s without equal.

The Barbican Theatre has an intimate feel about it anyway, and this production brings the action right to the front of the stage. Lotte is right in our faces from the first moment. The first of the eight episodes is a long monologue by Lotte, and barely a few lines in we’re hooked. We like her, we pity her, we want to know more about her. We’re into this thing. As each episode succeeds another, our curiosity about Lotte, and a weird affection for her, just grows. There is an amazing (or, as Lotte would say - in a broad Australian accent - ‘amaaaazing’) scene where Lotte tries to find an old school friend in an apartment block, represented on stage by a single undersized door and a row of buzzers. The amount of action and emotion wrested from this one object is, indeed, amaaaazing.

Lotte careens about the stage, sometimes in wild dance - Blanchett mesmerises us with everything she’s got - her presence, her pale face, her reasonant seductive voice, her charisma, the personality she creates for us, and at times her whole gyrating body. Possibly the moment that really had me, and which has lingered, was at the climax of a long, wild soliliquy about God, which I didn’t really follow, when Lotte came right to the edge of the stage, bleeding, and held her bloody hands out over the first rows and cried, “WHY am I bleeding?” She concluded, more resignedly, “Because He wants me to feel small”.

The production is clever. The translation is modern, the actors keep their Australian accents (perhaps somewhat exaggerated in Cate’s case), yet the German references remain. The angst of the East-West divide remains - we understand that - but the themes of alienation and dislocation are universalised.

Be sorry you missed this one. The woman is a genius. She received a standing ovation on opening night, a rarity in English theatres.

Here's The Telegraph's review where the reviewer loved Cate but couldn't get over his aversion to the play itself.

Michael Billington's review in The Guardian is more understanding of the play. He praises Cate, but holds back a little - not sure why.

The Observer's reviewer  was a little more enthusiastic.  I think he saw the same performance I did, opening night. 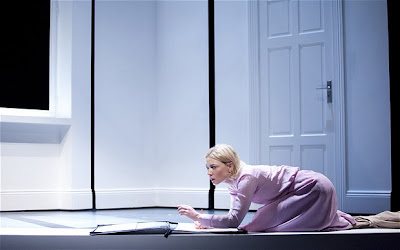