The London galleries’ having drawn a deep breath over the hysteria that was the Leonardo d Vinci exhibition at The National (I couldn’t get a ticket for love nor money), have turned their attention to their home-grown artists. Portraits by Lucien Freud are presently filling the National Portrait Gallery - no, I haven’t been yet. I’m not a huge fan of freud (that thing of his that the Australian National Gallery bought a few years back turned me right off), but perhaps I should give his portraits a chance...

But I have been to see David Hockney’s landscapes at the Royal Academy. This was another show that attracted long lines of gallery-viewers. Hockney has a very large oeuvre, and this show concentrated only on his landscapes. Perhaps it’s a little unfair to judge him on these, then...but while there were some pieces I thought very good, others were awfully scrappy. Hockney lived in Los Angeles for many years earlier in his life - some of the landscapes of the Hollywood hills with snaking roads running through them, were very good. He now lives back in his native Yorkshire, where he runs a large studio.

Most of the work in this exhibition was from his days in Yorkshire, including very large collections of plein aire paintings that really shouldn’t have seen the light of day in a gallery, except perhaps to explain a working procedure. Other much larger works were also very scrappy. The best stuff was that done back in the studio - my favourite was the large picture of harvested logs lying by the side of a forest road. This one was used on the promotional poster, and became known as “the french fries picture” (for obvious reasons).


One curiosity was a large gallery in the centre of the Academy building which the curator had given over to Hockney, asking him to create a work specially for the exhibition. He come up with an enormous canvas (actually, a set of much smaller canvasses hung together in a matrix - something that is now rather a trade mark of his, although it apparently came about only for practical reasons about getting big things in and out of small studios). This enormous landscape was hung at one end of the gallery, while all the remaining wall space was taken up with over 50 smaller landscapes - enlarger from (wait for it...drum roll) iPad drawings. Now, all kudos to elderly gentleman painters who are early-adopters of new technology, but these things were the merest of sketches. Their impact covering the gallery walls was interesting - like nice wallpaper - but individually...well... I had a similar reaction to his video enterprises. very nice experiments, presumably done with the help of his studio assistants, but hardly earth-shattering.

You want fabulous modern video art? Try that nativity scene I saw in a temporary hut in Covent Garden last December. Now that was enthralling.

But back to the British artists - over at the Tate Modern, Damien Hirst has a retrospective. I’ve never seen Damien Hirst before, except of course in press pictures, illustrating the latest controversial thing he’s done: severed animals, corpses, dead things. The exhibition wasn’t high on my “to do” list, but a friend with free entry invited me, so off we went. I must say, I’m glad I did. This is conceptual art at possibly its most conceptual. Remember when we thought that hanging a blank canvas on a gallery wall was as far as minimalism could go? Nowadays we could just have the little explanatory sign and forget the object altogether. Luckily, I’m fond of conceptual art - I like the way it makes the viewer part of the art by requiring some thought. I also like the experiential kind of art experience (though only up to a point - there’s some very strange theatre around - but that’s another story). 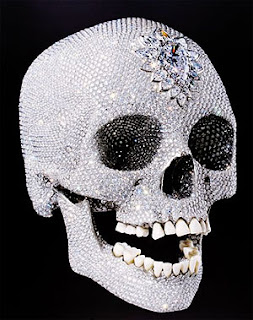 Back to Hirst: the Tate has his diamond-encrusted skull on view in the Turbine Hall, and it is quite an object, both conceptually and actually. Possible one of his most successful pieces, if only for that reason. We can skim lightly over the fact that Hirst probably never actually made any of it - it is a platinum cast of an old skull he found in a junk shop, encrusted with diamonds (including an absolute beauty on the forehead) which was made by a jeweler. It has its own teeth, cleaned up by a dentist. It’s title is “For The Love of God”, which could sound quite mystical or philosophic. However apparently it was inspired by Hirst’s mother, which used to use that expression when informed of his latest modern art exploit. We shall return to Hirst’s mother. I rather like her.

On the subject of artists who don't actually make the art: it seems Hockney had taken Hirst to task on this very point, according to this article. Considering that Hockney himself does employ assistants in his own large studio (he uses the pronoun "we" a lot when talking about his work ont eh audio guide), I'm a little puzzled about this. Then of course we could consider Leonardo or Rembrandt, and many others, who had droves of assistants turning out stuff, or painting in the backgrounds, or whatever. But on to even more controversial topics...

Other highlights of the exhibition are his cow (and calf) sawn in half and pickled in formaldehyde. You can walk through the cow, which is admittedly not an everyday experience. Locals were impressed by the pickled shark, though it was an inferior experience to being swum over by the real ones in the aquarium tunnel in Sydney.

Pharmacies, pharmaceuticals, and those death-dealers, cigarettes, feature as a theme in many works. One installation filled with pharmaceutical products is said to have been inspired by Hirst’s mother - her complete faith in modern medicine contrasting for him with her utter lack of faith in the restorative powers of modern art. I like his mother. I’m sure he would be a lot worse without her steadying influence.

Butterflies are another Hirst signature theme. He has made rather glorious stained glass windows out of butterfly wings: beautiful at first sight, but a little disturbing when you consider all those dead insects. Speaking of which, the exhibition also has a very large black circular piece made entirely of dead flies. I’m not sure Damien Hirst’s studio is one where I’d like to work. The best butterfly piece - and perhaps my favourite thing after the diamond skull - was the room hung with white canvasses to which were pinned butterfly cocoons. During the course of the exhibition these hatch into beautiful butterflies, which fly around the heads of visitors. Another successful melding of concept and reality.

My friend had attended the opening night cocktail party. There were some hazards - at times it was difficult to tell what was a canape and what was an exhibit - all those bowls of butterfly food and some vaguely-honeycomb-looking things... “Oops! I’ve eaten an exhibit! Sorry!”

Some images from:
http://www.artquotes.net/masters/hirst/for-the-love-of-god.htm
http://www.telegraph.co.uk/culture/art/art-news/9086620/Damien-Hirst-to-build-500-eco-homes.html
Posted by Annette Freeman at 2:40 AM