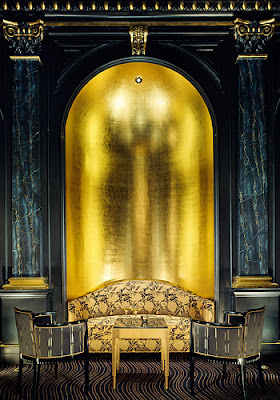 Chanced upon the Beaufort Bar at the Savoy the other day. It was so dark that it took ten minutes for the pupils to dilate sufficiently to read the cocktail menu, but once optimum dilation had been reached, this is what I learned about the bar:

This was once the stage used by the tail-coated, bow-tied players of the Savoy Havana Band and Savoy Orpheans. Led by regulars Rudy Vallee and Carroll Gibbons with visitors such as George Gershwin, they were broadcast live by the newly formed BBC in the 1920s thus, becoming famous throughout the land.
The stage was also the focal point for the evergreen „Stomping at The Savoy‟ dinner dances, named after the Benny Goodman tune that in fact celebrated the Savoy Ballroom in Harlem, New York.


Naturally, it was necessary to imbibe a cocktail, especially once the waitress pointed out the tonnes of gold leaf that adorned the walls of the alcove where we were sitting. I chose this classic:

CORPSE REVIVER No. 2
A Savoy classic, “Any more than four will unrevive the corpse.......”Bombay Sapphire Gin mixes with Lillet Blanc, Cointreau, Fresh Lemon and a drop of absinthe.

And how was it? Delish! Recommended.

The Cocktail Lovers review The Beaufort.

Top image from:
http://www.thecocktaillovers.com/2011/07/beaufort-bar-at-the-savoy-w1/
Posted by Annette Freeman at 10:45 PM