British style icon, man of action and drinker of martinis - shaken, not stirred: that is of course Bond, James Bond. The Barbican is hosting an exhibition this summer celebrating all things Bond, especially his Englishness. As one quote in the exhibition puts it, women leave a Bond movie admiring James Bond, and men leave it “standing tall”. I’m not entirely sure I agree with that, or even understand it, but the exhibition turned out to be a lot of fun.

In the foyer of the Barbican, Bond (in his Sean Connery iteration) leans stylishly in his stylish Saville Row suit against his stylish Aston Martin sports car. It’s all about style. Inside on view are many of the costumes from the movies, including the sumptuous evening gowns from ‘Casino Royale’. Of particular interest to exhibition-goers are Bond’s teeny swimming trunks, and the bikinis-with-knife-belts worn by his glamourous co-stars. There are jewels, diamonds (of course), golden guns, white dinner jackets, furs and ski-suits - including a memorable yellow and red number worn by Bond as he leaves the latest blond, clad only in a white fur, in the mountain hut and goes out to ski right off a mountain side: 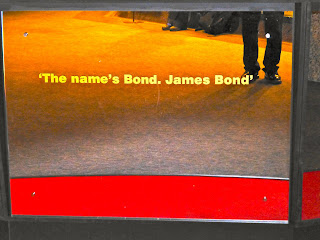 There’s M’s office re-imagined with it’s buttoned leather doors, and Q’s laboratory with its clever gadgets for beating bad guys. I particularly liked the “Re-breather”, a simple device to be inserted between the teeth, enabling Bond not only to swim underwater without his SCUBA gear, but to do so in his Saville Row suit, emerging merely a little (handsomely) disheveled.

There are snippets of the movies playing throughout the exhibition, reminding us of such classic moments as the shower scene when Bond and his lady are spied upon by a robot (“What’s he doing?”; “Oh, just cleaning up a few things”). The body of Pussy Galore, asphyxiated by being painted all over with gold paint, is recreated in full life-like splendour. Bond, strapped down and with a laser beam headed for his crotch: “You don’t expect me to talk, do you?” Bond at the casino tables of Monte Carlo (“shaken, not stirred”); Bond piloting a gondola not only along the canals of Venice but also through it’s streets; Bond tobogganing down a mountain with the girl de jour, in her cello case (the case is on display) holding her priceless Stradivarius over his head.

Ah, yes. The adventures and the contraptions become more and more ridiculous as expensive stunts (a 1977 ski stunt was in its day the most expensive movie sequence ever produced, at half a million dollars) give way to the era of digital technology (Bond’s ski-do thing hooked to a glacier, which calves off into the ocean, melting on the way, allowing him to convert his machine to a windsurfer and windsurf off into the ocean -- really??) The story boards and sketches used to imagine these ridiculous escapades were endlessly fascinating.

But in the end, and despite my skepticism, the sheer amusing campness of it all converted me to a Bond fan. So naturally I had to visit the martini bar to imbibe a ‘Vesper’, Bond’s preference in ‘Casino Royale’: gin, vodka and Lillet Blanc - shaken not stirred, of course.

Posted by Annette Freeman at 11:09 PM