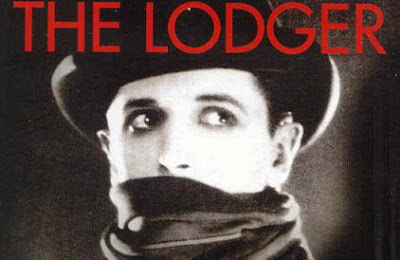 With all this sport about, you may be thinking that I have been neglecting my cultural attendances. You would be wrong - I just haven’t had time to tell you about the recent ones. So here’s a round up:

The British Film Institute has been working hard, and its archivists have recently restored this early (1927) Hitchcock silent movie, about a landlady who suspects her lodger of being a dastardly criminal. The Barbican gave it a wonderful showing, complete with live soundtrack performed by none other than the London Symphony Orchestra. The score was a brand new one, composed by Indian-British composer Nitin Sawhney. With the suitable silent-movie-hero-looking Ivor Novello on the grainy black-and-white screen, the London fog, the ditzy blond, and the LSO in full film-music flight, this was fabulous. 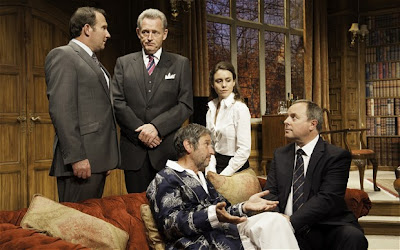 YES, PRIME MINISTER
I expect you’ve heard of the television program of this name, and you may also know that it has transmorgified into a stage show, written by the same writers, Antony Jay and Jonathan Lynn.
The production is playing at the New Trafalgar Theatre, a small venue, where the stage set represents the study at Chequers. The Prime Minister is dealing with a crisis, and with Sir Humphrey, and the redoubtable Bernard is beside him. There is also a new character, a political aide named Claire. At first it is hard to forget the memorable actors who created the original TV characters - quite a task for the stage actors, to make us forget. But by the second half, I’d become absorbed in the shenanigans and had mentally embraced, so to speak, the new actors. Bernard was the best - thanks, Clive Hayward. 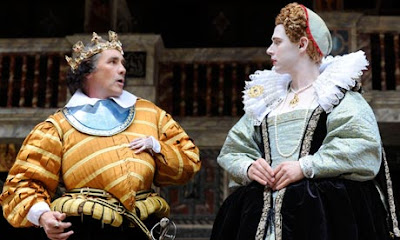 The evil King was on at Shakespeare’s Globe, so of course it rained on the yardlings, someone fainted, and our seats were of Elizabethan uncomfortableness. But the sublime Mark Rylance was in the title role, so from the very first line -- “Now is the winter of our discontent...” -- the rain and the seats were completely forgotten in absorption with the stage. As is usual at The Globe, we had the accompaniment of minstrels; and for this play we also had the female roles played by young men. It was all quite fabulous - I think that will suffice for my review. You can read another here.

But let me just say that Rylance’s Richard had some unusual features. Often, the audience laughed at him - this is, to say the least, unusual for the king who famously murdered the two boy princes in the Tower (according to Shakespeare, anyway), as well as numerous other people who stood between him and his throne. The reviewers have not known what to make of this, one suggesting that the director should do something to eliminate the phenomena; and another comparing the characterisation to Tony Blair - a jolly fellow who goes on to do great evil (!!) It puzzled me a bit; but I did think that Rylance made Richard III very human, and very clever. Perhaps not creepy enough. But “A horse, a horse, my kingdom for a horse!” was utterly believable, and you kinda wanted someone to find him a horse, despite his evil deeds. The jury’s out.

Later, I read that Rylance had suffered a bereavement in his family just a few weeks before, but had decided to go on with his Globe season (though he pulled out of the Olympics Opening Ceremony). Very poignant. Thank you, Mr Rylance. 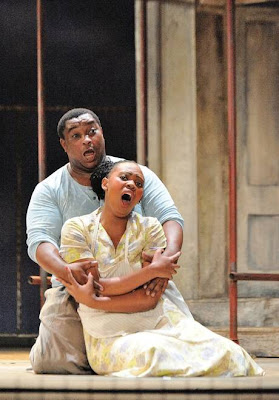 At the Coliseum, home of the ENO, the visiting Cape Town Opera Company put on a quite fabulous evening. The all-black South African cast playing the moving “Porgy & Bess” gave it a new frisson. It was not possible to dismiss the tableau of poor black waterfront folk as a history piece from Gershwin’s 1940s - the South Africans reminded us that there are plenty of communities like this today.

Gershwin’s music is so lovely, and the cast sang magnificently. “Summertime”, “I Loves You Porgy” -- the favourites were all there. Our Porgy (Xolela Sixaba) had a huge, beautiful rich bass voice; and the voice of his Bess (Nonhlanhla Yende) was big enough to match him. The supporting cast and the chorus were all exemplary. I shed a tear - always a sign of a good night at the opera.

I loves you, Porgy. 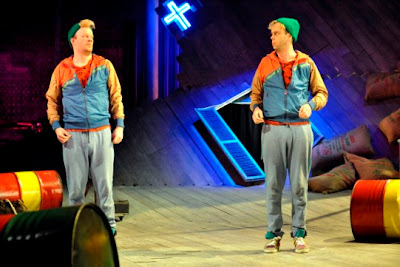 THE COMEDY OF ERRORS

This has to be one of my favourite Shakespearean comedies, about two sets of twins separated at birth and then reunited in an hilarious confusion of mistaken identity. As the Royal Shakespeare Company's site puts it, "In a town the size of Ephesus, events like these can only lead to confusion." My favourite line in the whole play is when Adriana, wife of one of the twins who enjoyed a steamy evening with the man she thought was her husband, learns that there's an identical twin. She interrupts the reunification to ask: "Which of you two did dine with me today?"

The very good cast of the RSC at Stratford-Upon-Avon is listed here.

Posted by Annette Freeman at 3:04 PM