If you visit the famous rock formation known as 'The Giant's Causeway', on the Antrim Coast of Northern Ireland, let me just sound a note of caution about the audio guide. Now, the main thing I wanted to know - and I think most people would want to know - is...why? Why - or, possibly, 'how' - do the rocks form into near-perfect hexagonal shapes? What forces of nature could have produced such a curiosity? You would think - I did - that the audio guide you procure from the snazzy new visitor's centre (a piece of architecture worth visiting itself) would provide at least a glimmer of information on this score. But no - the main content you get, narrated by a lilting Irish voice, is about fairy stories. Or rather, giant stories. This may be great for intriguing small children (not that many small children listen to audio guides), but it very quickly becomes boring when you are clambering over a true wonder of nature, and wondering yourself...why? Or, possibly, how? 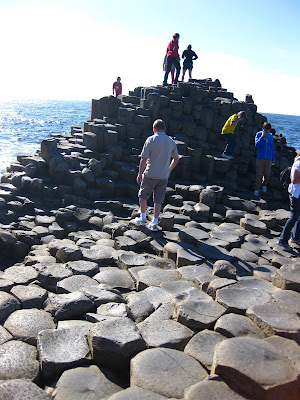 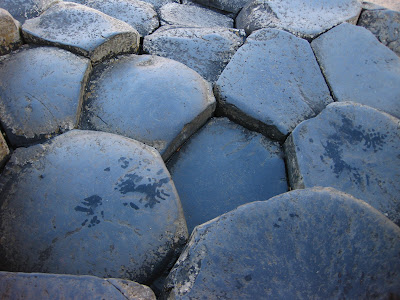 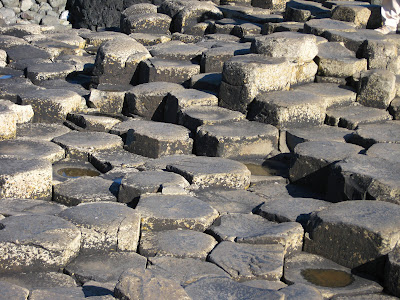 It may be that the audio guide did venture some information about the geology, but I missed it amongst my irritation with the story of a giant, the name of whom escapes me, running around the Irish coastline of antiquity, and leaving behind various rock formations. You know the sort of thing - shaped like a boot, shaped like a camel, shaped like a pipe organ.

And so it is to trusty Wikipedia that I must turn for a brief explanation of the strange geology that formed The Giant's Causeway:

Some 50 to 60 million years ago, during the Paleogene period, Antrim was subject to intense volcanic activity, when highly fluid molten basalt intruded through chalk beds to form an extensive lava plateau. As the lava cooled rapidly, contraction occurred. Horizontal contraction fractured in a similar way to drying mud, with the cracks propagating down as the mass cooled, leaving pillarlike structures, which are also fractured horizontally into "biscuits". In many cases the horizontal fracture has resulted in a bottom face that is convex while the upper face of the lower segment is concave, producing what are called "ball and socket" joints. The size of the columns is primarily determined by the speed at which lava from a volcanic eruption cools. The extensive fracture network produced the distinctive columns seen today. The basalts were originally part of a great volcanic plateau called the Thulean Plateau which formed during the Paleogene period.

Wikipedia does, I must admit, also refer to the legend of the giant - 'FinnMacCool' - but we'll skim lightly over that, to sit and marvel at the geometric geology. There are about 40,000 interlocking basalt columns, starting in the cliffs and leading like stepping stones down into and under the sea. Most are hexagonal, though some have four, five, seven or eight sides. Sit with me on one of these columns, watching the rough seas of the Irish Coast wash in, and marvel again at the question - why? Or, possibly, how?

But here's another curious fact: there's another place where a similar formation exists - Fingal's Cave on the island of Staffa in Scotland, roughly due north of the Antrim Coast. All part of the same ancient lava flow? Or a Causeway from one place to the other built by a Giant....? 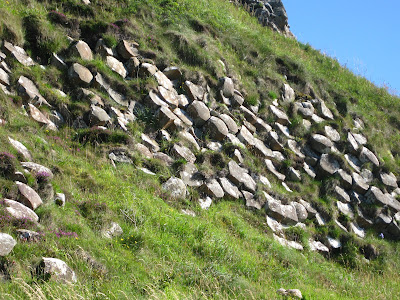 Posted by Annette Freeman at 10:09 PM