The new Titanic Museum  in Belfast isn't called a museum, or an exhibition. It's just called "Titanic: Belfast". Or "an iconic project" or a "visitor experience". For a museum, it is certainly on steroids. Congratulations to Belfast on completion of the project, which was apparently fraught with difficulties.

The premise for siting a museum - sorry, visitor experience - about The Titanic in Belfast is that the ship was built there. In fact, it was built right at the dock where the new museum (I'll keep using that term, but you know what I mean...) is sited. After you have had your visitor experience, you can walk along the historic slipway where The Titanic and her sister ship The Olympic where built under the great cranes, and then launched. The Titanic, as we all know, then sailed on to Southampton where she picked up her passengers for her first and last voyage across the Atlantic.


Check here for details of the striking and beautiful building which houses the museum/experience. Here's a description:


The 14,000 sq.m.(150,700 sq.ft.) venue accommodates nine galleries of interactive exhibition space, including a dark ride, underwater exploration theatre, recreations of the ship’s decks and cabins and a luxurious conference and banqueting suite with capacity for up to 1000 people.
The unique architectural design was influenced by several maritime themes, including ice crystals, ships' hulls and the insignia of the White Star Line.

Despite my scepticism about the marketing-speak, a tour of the Titanic museum is indeed an "experience". There are traditional interpretive displays, especially about shipbuilding and the history of the docks area of Belfast. There is a hop-on ride which takes you through the bowels of a hull under construction. There is some pretty darn impressive surround-visuals giving a virtual tour of 'Titanic', from the lower decks to the upper. There are holograms of First Class passengers, models of the ship, spooky audio of survivors, and underway video of the sunken carcass.

You can take some mini-virtual tours of the nine galleries here.

And the building itself, sitting on the edge of the docklands, like a great white cruise liner itself...or perhaps like a great iceberg.... 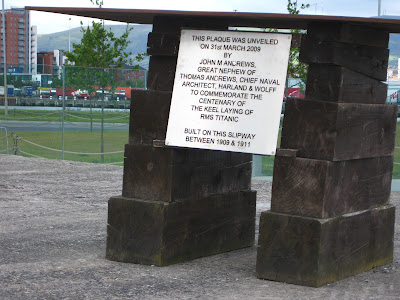 Architects raving about the building.
(Architect mark Evans sounds like he's an Aussie.)


Posted by Annette Freeman at 9:38 PM