In Dallas, Texas, a tourist who ventures under the freeway flyovers and into Deep Ellum should proceed with caution. Deep Ellum is one of those run-down areas which is in the early stages of a nascent gentrification. One of those places that the guide books and the taxi drivers assure you is 'perfectly safe -- now'. The locals will tell you it's 'the center of all things cool and local in the city.' Yeah, OK. Just make sure you have the number of a reliable cab co to get outta there.


However, I encourage you to take the risk for the sake of eating at The Twisted Root Burger Co. Not only is it a very friendly joint, and excitingly quirky, you will also get to eat a SUPERB burger. Veggie if you wish. In fact, whatever you wish. In addition to their classic and exotic burger combos, you can 'build-your-own'. As they say on their website:

They also say "IT'S SLAP-YO-MOMMA-GOOD" but I don't understand what that means, and I'm a bit afraid to enquire.

Here's a sample of their menu:

If that's not got you wanting to hie on over to Deep Ellum right away, there are other features of The Twisted Root that you should know about. For one thing, you can pick your own peck of pickled peppers from large jars on the counter. The folks at Twisted Root don't hand out mere boring table numbers - you could be called to collect your order a shout of "Elvis!" or by the dulcet strains of 'Clementine'. And you can bring your gun. Yes, really. As long as it's licensed. The sign says.

This is Texas, after all. And Deep Ellum. 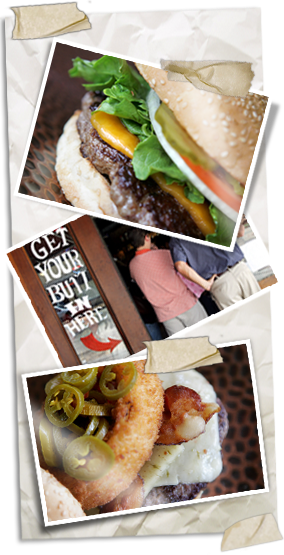 Posted by Annette Freeman at 11:41 PM