Recently I was following a walking tour guide around the City of London, that One Square Mile that not only houses the Bank of England, the London Mayor's House, but is also a palimpsest layered on top of ancient Roman Londoninium. What might you find here?

The tour guide was looking for - of all things - Harry Potter sightings. One of the best he found was Leadenhall Market, a cheerily restored Victorian market now full of nice delis, flower shops and upscale pubs. Once it would have been a sea of poultry, meat carcasses, vegetables, dirt, manure and shouts of the vendors. And the smells. There would certainly have been smells.


Leadenhall Market is a covered market in London, located on Gracechurch Street but with vehicular access also available via Whittington Avenue to the north and Lime Street to the south and east, and additional pedestrian access via a number of narrow passageways.
It is one of the oldest markets in London, dating back to the 14th century, and is located in the historic centre of the City of London.
The market dates back to the 14th century. It is open weekdays from 7am until late, and primarily sells fresh food; among the vendors there are cheesemongers, butchers and florists. Originally a meat, game and poultry market, it stands on what was the centre of Roman London. A number of commercial retailers are also located in the market, including clothes shops and a pen shop.
The ornate roof structure, painted green, maroon and cream, and cobbled floors of the current structure, designed in 1881 by Sir Horace Jones (who was also the architect of Billingsgate and Smithfield Markets), make the market a tourist attraction.
From 1990 to 1991 the market received a dramatic redecoration which transformed its appearance, enhancing its architectural character and detail. The redecoration scheme received a special mention in the Civic Trust Awards 1994.The market is a Grade II* Listed Building, being listed in 1972.

But here's the thing that excited my tour guide and the J K Rowling fans who had joined him: Leadenhall Market was used to represent the area of London near The Leaky Cauldron and Diagon Alley in the film 'Harry Potter and the Philosopher's Stone'.


​Leadenhall Market dates back to the 14th century and is situated in what was the centre of Roman London. Originally a meat, poultry and game market, it now features a variety of vendors as well as commercial shops, restaurants, cafes and pubs. Starting as the site of a manor, Leadenhall has survived changes in use, rebuilding, and even the Great Fire to become a popular destination for city residents, visitors and workers. In the early 1300s the Manor of Leadenhall is listed as belonging to Sir Hugh Neville. Within a few years the area around the manor becomes a popular meeting place for first poulterers, and then cheesemongers.
Former Lord mayor Richard 'Dick' Whittington gifts Leadenhall to the City in 1411 and Lord Mayor Simon Eyre replaces the manor hall with a public granary, school and chapel in 1440, as a gift to the citizens of London. The market is enlarged to provide a site for selling poultry, grain, eggs, butter, cheese, herbs and other foodstuffs. Over the next 200 years Leadenhall Market is a centre of commerce and further markets are added for wool, leather and cutlery.
​In 1666 Leadenhall Market suffers only a small amount of damage in the Great Fire. Rebuilding after the fire, the market becomes a covered structure and is divided into the Beef Market, the Green Yard and the Herb Market.
In 1881 the City's architect Sir Horace Jones - who was also the architect of Billingsgate and Smithfield Markets - redesigns Leadenhall. His designs replaced the earlier stone structure with wrought iron and glass - a structure which in 1972 is given Grade II* listed status. 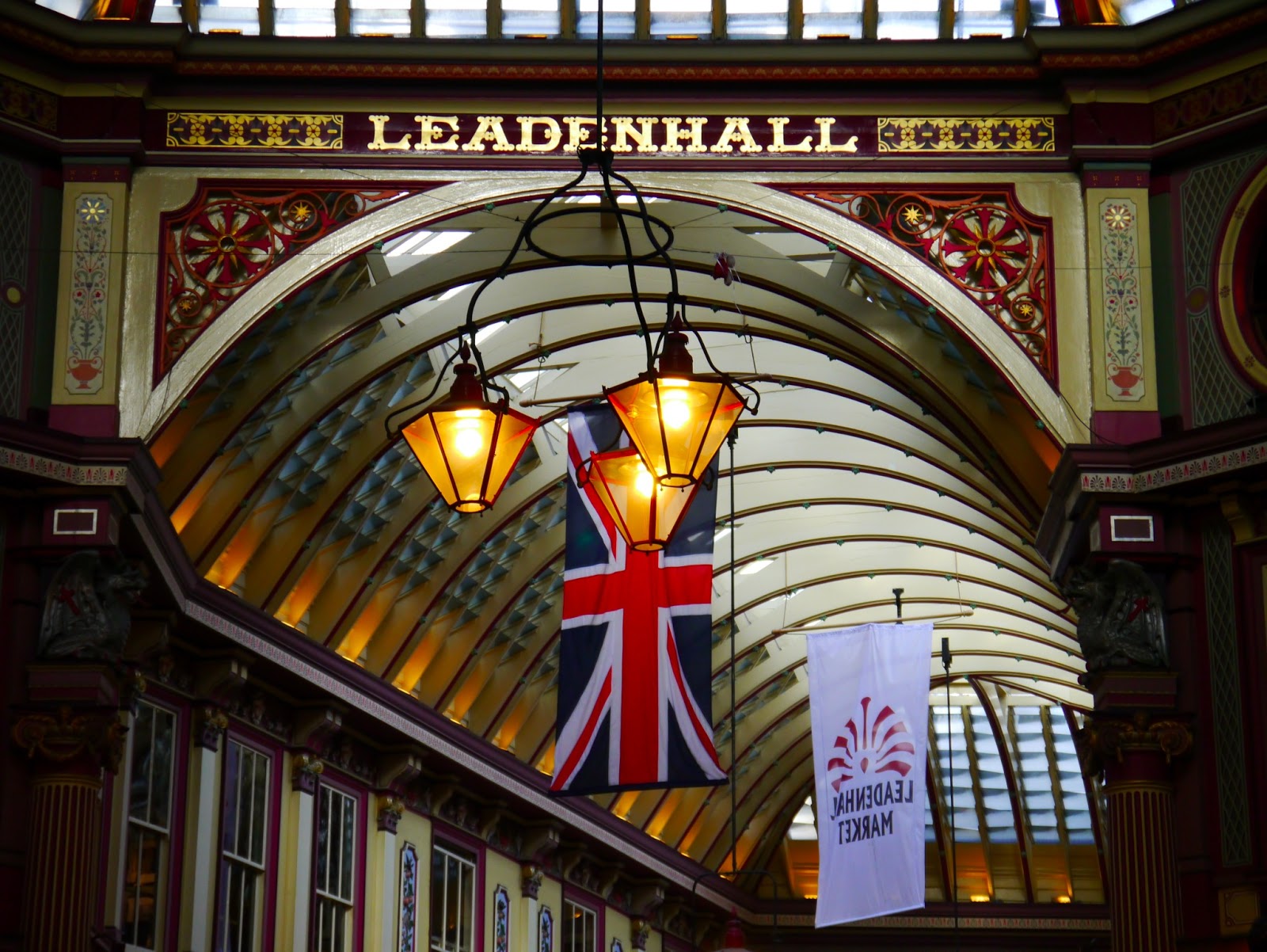 The Poultry Market remains at Leadenhall until the 20th century, by which time all shop units are let for the sale of meat, fish or provisions. By the mid 20th century the shops are also being used for general retailing and leisure and by the end of the century Leadenhall Market has evolved into one of the City's five principal shopping centres.

Looking at the beautifully clean and vibrant Victorian buildings of today it's hard to imagine the noise and smells of a 19th century market, but if you look closely at the shop fronts you will see the wrought iron hooks where produce used to hang. 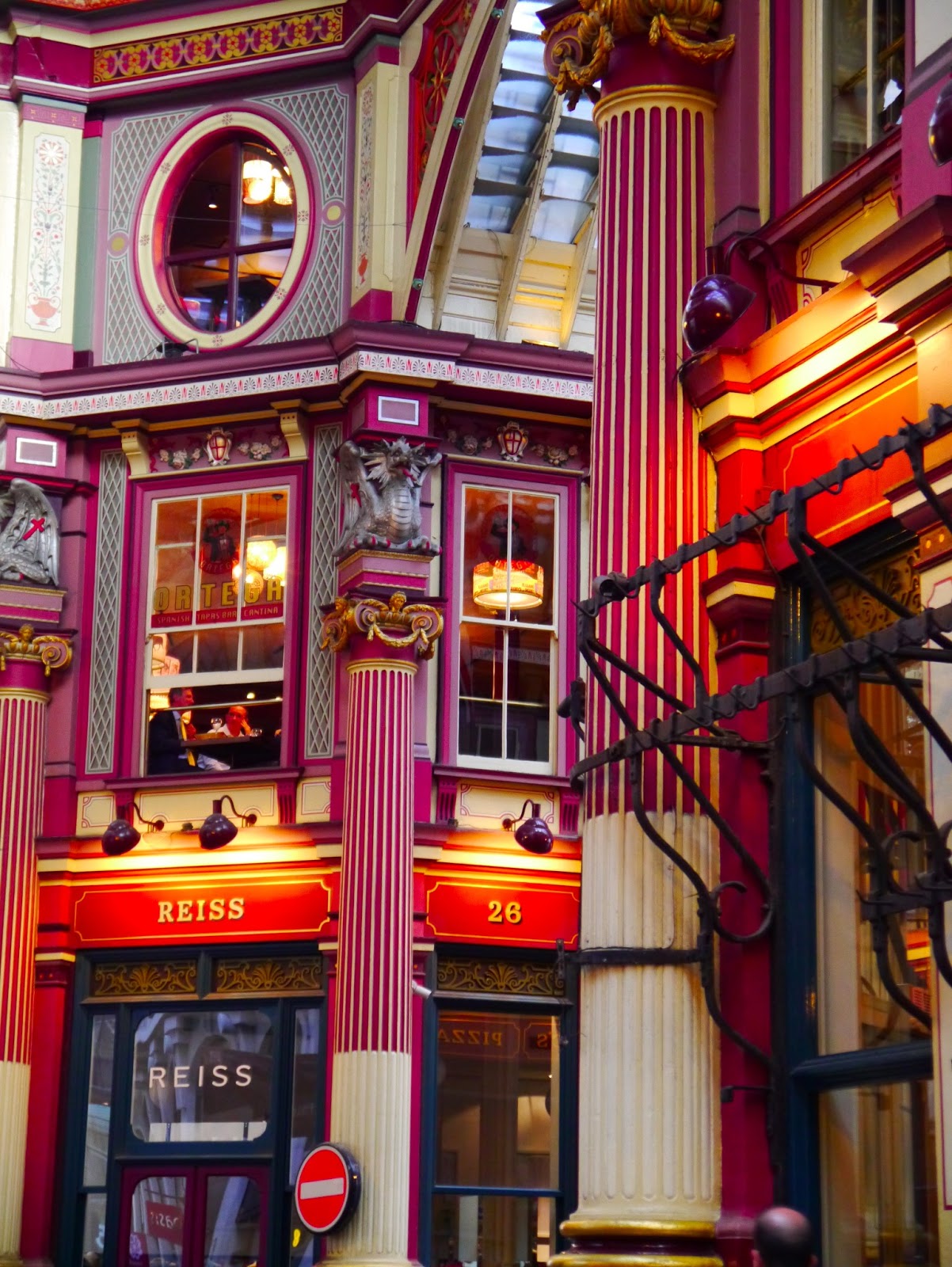 As well as the connection to 'Dick Whittington' Leadenhall Market has played host to a few other famous names:

Part of Harry Potter and the Philosopher's Stone (the first film in the blockbuster series) was filmed in Leadenhall in 2000/2001. The market was used to represent the area of London leading to the popular wizarding pub The Leaky Cauldron and magical shopping street Diagon Alley.

Leadenhall Market is a popular choice as a filming location and can be seen in many other movies including: Tinker, Tailor, Soldier, Spy; The Imaginarium of Doctor Parnassus; Hearafter; and Love Aaj Kal. The pop group Erasure also filmed their music video for Love to Hate You in the market in 1991. 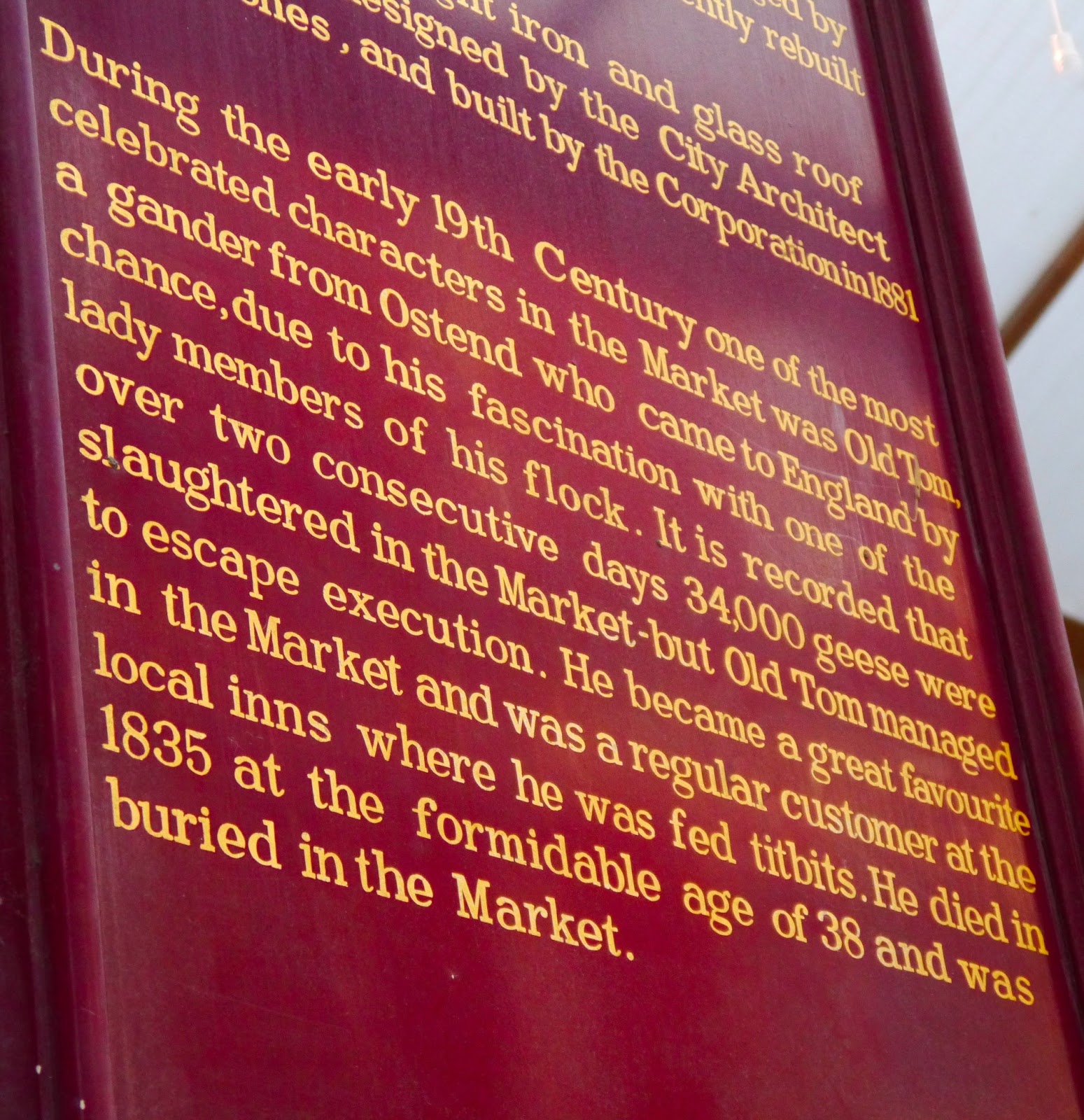 During the 18th century 'Old Tom' was a celebrated character in Leadenhall. He was a gander who managed to escape his fate of being slaughtered along with 34,000 other geese. He became a great favourite in the market, even being fed at the local inns.

Posted by Annette Freeman at 10:31 PM