A visit to the Greek island of Santorini usually involves the pursuit of sun, views, wine, food, coffee, sunsets, poolside loungers and maybe a little shopping. News of an archaeological dig on the island was of passing interest only - until we visited Akrotiri. I was stunned to discover the oldest archaeological excavation in Europe (contemporaneous with the New Kingdom of Egypt) -- a Minoan civilisation of the Late Bronze Age, dating from the 17th century BC. That's around 3,400 years ago! 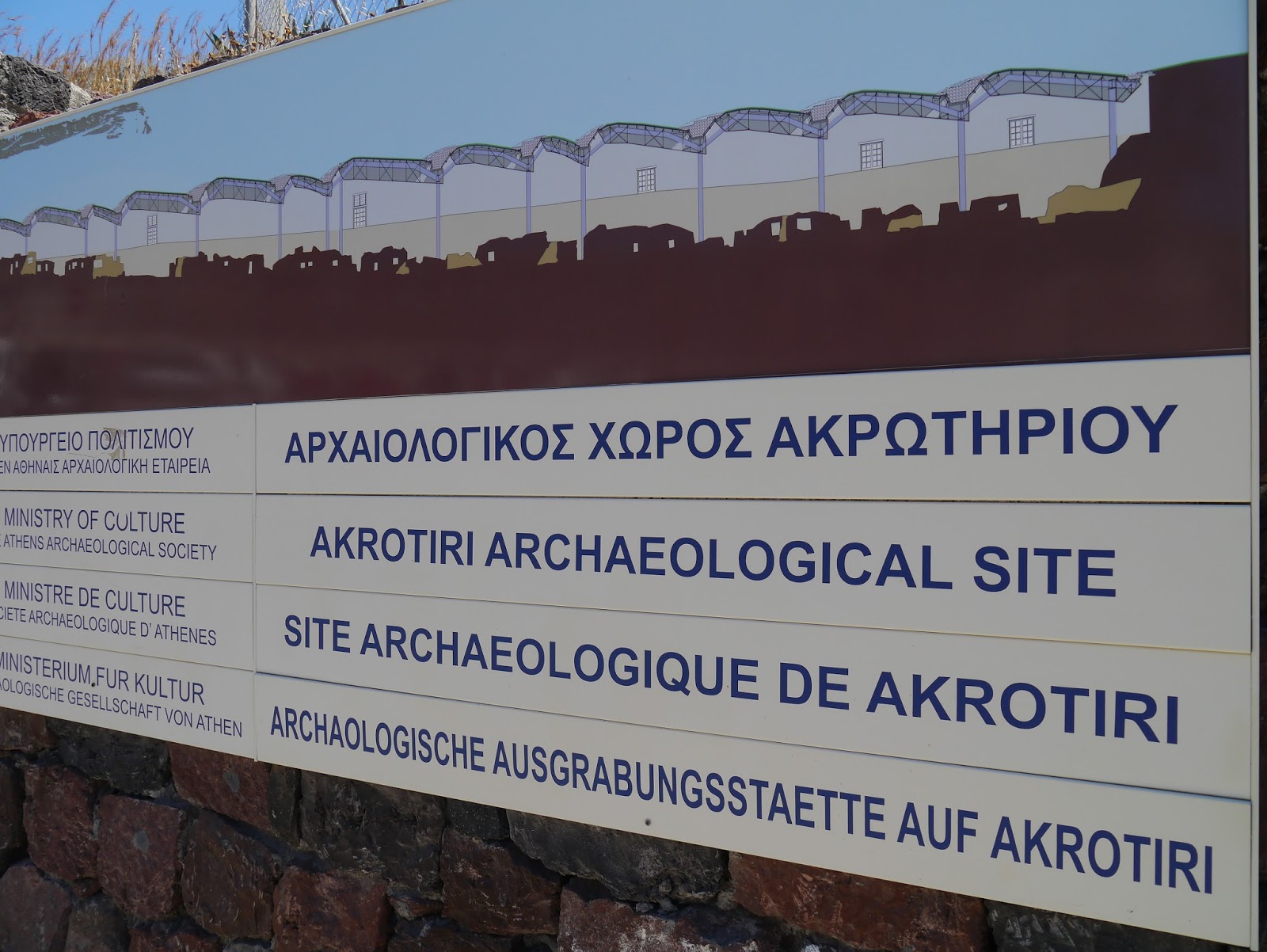 Who knew? I had only the vaguest idea of what the Late Bronze Age was all about -- in my ignorance, I would have thought something fairly primitive, barely beyond stone axes and caves. And I would have been utterly wrong. The excavations at Akrotiri disclose a sophisticated community with technology for drainage and plumbing (inside toilets!), transportation, storage of foodstuffs, a busy shipping culture, town planning, two and three story buildings, and a vibrant taste in exquisite art work. Possibly (judging by doorway heights) the people would have been only three or four feet tall, but obviously smart. Wikipedia says:


Knowledge of navigation was well developed at this time, and reached a peak of skill not exceeded (except perhaps by Polynesian sailors) until 1730 when the invention of the chronometer enabled the precise determination of longitude.

I'd heard of Greek shipping magnates - and Santorini itself has large and lovely Captains' Houses from the nineteenth century - but who knew they were at it back in 1600 BC?

The story of how the site of Akrotiri (a modern name - no-one is sure what the ancient town was called) was preserved is the stuff of legends - literally. The island of Santorini is volcanic - the present-day settlements cluster along the rim of the caldera, and in the centre of the inner sea is a small island, Nea Kameni, which the locals refer to as 'the volcano', where sulphur still leaks out of fumaroles. The main island was formed about 2.5 million years ago, and subsequent volcanic activity has thrown up numerous islands throughout the Cyclades. It's thought that the present form of Santorini's caldera, with its ring shape and inner sea, formed about 21,000 years ago, though the middle islands are more recent.
But back to our story - the biggest eruption about which more than surmise is known occurred around 1630 BC, and is known as the Minoan Eruption. It was the largest eruption to take place on Planet Earth in the last 10,000 years - larger than Krakatoa (1883), and 35 times larger than Mt St Helens (1980). For comparison, Krakatoa could be heard over a radius of 4,500 km and killed 36,000 people. From Indonesia, it darkened the skies of Europe. Imagine then what the eruption of Santorini - or ancient Thira as it was known (or sometimes Thera; the modern name is a contraction of 'Saint Irina') - was like for the people living on the island and in the region in 1630 BC. Yes -- note that date. The same as that attributed to the remains of the ancient town of Akrotiri.

In fact - and I don't find this too implausible - some reckon that the Minoan Eruption on Thira could have been the cause of most of the plagues of Egypt described in the Old Testament: red ash dyeing waters of the Nile, sulphur dioxide in the ash turning the water into sulphuric acid, frogs leaving the river in plague proportions, the ash cloud blocking the rays of the sun, extreme weather conditions, acid rain causing skin sores on the people and the death of small animals....

And the Bronze Age people of Akrotiri? Few valuable items have been found at the dig, and no skeletons, which suggests an early and orderly evacuation, probably on those excellent ships they sailed. The people may have gone to other Minoan islands, such as nearby Crete (which was also badly affected by the eruption). But although it is difficult to pin down exact timings, the Minoan Eruption seems to have occurred at roughly the time period, or a little before, the demise of the Minoan civilisation. Wiki says:


Archaeological findings, including some on the island of Thera, suggest that the centre of Minoan Civilization at the time of the eruption was actually on Thera rather than on Crete. According to this theory, the catastrophic loss of the political, administrative and economic centre by the eruption as well as the damage wrought by the tsunami to the coastal towns and villages of Crete precipitated the decline of the Minoans. A weakened political entity with a reduced economic and military capability and fabled riches would have then been more vulnerable to human predators. Indeed, the Santorini Eruption is usually dated to c. 1630 BC...

Whatever happened, it wasn't good. However, the eruption did bury the fascinating town of Akrotiri, Pompeii-like - sometimes it's called 'the Greek Pompeii.' Although a walk around the site needs much better signage and explanation, or a very good guide or guidebook, even a little information can bring those Bronze Age merchants and sailors back to life in the imagination.

Plus - there's the murals. The Minoans painted delightful murals, most using a fresco technique which has kept them fresh and vibrant. The subjects are mainly happy ones - flowers gatherers, nature, children playing, fishermen; and also stories of ships, rituals, shipwrecks and animals. The originals have been taken from the Akrotiri site to various museums, but some clever people have made 3D copies of them which are presently on display at the Santozeum in Fira.


But wait - there's more! You've heard the legend of the Lost City of Atlantis? The earliest mention of this legend was by the venerable Greek philosopher Plato in his dialogues (stories) called 'Timaeus' and 'Critias'. Now, Plato lived in Athens in the 5th century BC, about 1100 years after the Minoan Eruption. His story of Atlantis describes an island with a volcanic-type topography (concentric rings of land and sea), and describes it as being swallowed up by the sea in a day and a night - "in a single day and night of misfortune" (the eruption?) There are a few bits in Plato which don't quite fit the Thira story, but hey, it was a long time ago, right? Believe it or not, historians and archaeologists still argue about the existence and location of Atlantis today - they've held conferences on Santorini. Wiki says, for example:


A. G. Galanopoulos argued that Plato's dating of 9,000 years before Solon's time was the result of an error in translation, probably from Egyptian into Greek, which produced "thousands" instead of "hundreds". Such an error would also rescale Plato's Atlantis to the size of Crete, while leaving the city the size of the crater on Thera; 900 years before Solon would be the 15th century BC.

Although such stories are fascinating, let's remember my Masada Criterion, perhaps better called pseudohistory, pseudoscience, or pseudoarchaeology. We might also remember that Plato, one of my all-time favourite writers, was an exceptional literary talent who could tell a good story with the best.

Atlantis aside, Akrotiri is fascinating enough, and thanks to the archaeologists - the project was begun by the Greek Dr Spyridon Marinatos (he was killed by a falling wall in 1974) - we can see the real bricks, walls, steps, streets, pots, and paintings of the ancient Minoans, before the volcano covered it all.

Visiting the Akrotiri site today is a pleasant experience, thanks to a roof which has built over the whole diggings. The roof uses an ecological system of earth insulation to keep the place relatively cool. However, in 2005 part of the roof, then under construction, collapsed, killing an unfortunate tourist beneath, who was walking in the so-called 'Triangle Square'. (Report). The whole place was closed down for years, and has only been reopened since 2012. Tourists no longer walk along the old streets of Akrotiri, but on wooden walkways built above and to the side of the ancient town.

Evidence of habitation at Akrotiri first came to light in the second half of the 19th century. However, systematic excavations were begun much later, in 1967, by Professor Spyridon Marinatos under the auspices of the Archaeological Society at Athens. He decided to excavate at Akrotiri in the hope of verifying an old theory of his, published in the 1930's, that the eruption of the Thira volcano was responsible for the collapse of the Minoan civilization. Since his death in 1974, the excavations have been continued under the successful direction of Professor Christos Doumas. (source)

Practical information for a site visit:

If you go to the site with a guide book, you might find it a little out of date. Descriptions of walking in the streets and squares have to be adjusted a bit to account for your location on an elevated walkway.

And it's not much good your guide book pointing out the buildings where there are murals, because they're not on the site any more. In fact, the site could be improved by a bit of explanation about where the murals are currently located. Apart from a few references to the Archaeological Museum in Athens, I haven't been able to find much information. You can views many of the murals here. The 3D reproductions in the Santozeum are, however, excellent.

Other finds from the site - objects, statuary, utensils, plaster casts of furniture - are on show at the Museum of Prehistoric Thira on Santorini. Oh - and they have some of the wall paintings there, too.

And a final tidbit: a local author, George Koukoulas, has published a novel called 'Atlantis Never Lost: The Story of Santorini', in which he intertwines a fictionalised account of ancient Thira and a modern archeological investigation and Atlantis theory. Available in shops here and there on Atlantis -- I mean, Santorini.