There’s an exhibition on at the Capitoline in Rome at the moment (until January 2014) that’s all about Archimedes. There’s interesting stuff about Syracuse in Sicily - his home town - in the 3rd Century BC when he lived; and some working models and digital films that show how some of his ideas worked - think giant hooks to scoop enemy warships out of the sea, huge mirrors to start fires on their decks, water clocks, levers to lift heavy weights ("give me a place to stand and I can lift the world"), and the famous ‘Archimede’s Screw’. It certainly was astonishing engineering for the times. 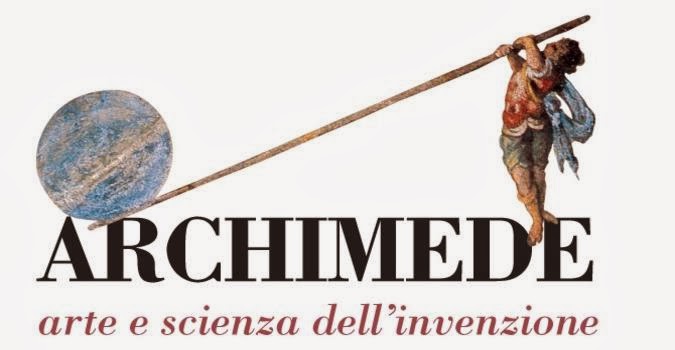 A “myth of Archimedes” took root shortly after he was assassinated by a Roman soldier, thanks to the Emperor Marcellus and the writings of the architect Vetruvius and the historian Plutarch. Forgotten for centuries, the inventor was re-discovered in the Middle Ages by Islamic civilisation and then again by the Renaissance.His teachings were the basis for discoveries by Galileo Galilei and Leonardo Da Vinci.

But most intriguing of all - the museum is exhibiting two examples of a hip bath that would have been in use in the public baths in Syracuse in Archimede’s time -- a terracotta receptacle with three stepped levels inside to sit on.  Archimede’s bath! That from which he leapt, possibly partially soaped (if they used soap), crying ‘Eureka! I’ve found it!’

And the story of why he needed to figure out what he figured out is also fascinating. It seems that the king, or tyrant, of the day ordered a new crown from a goldsmith and provided the gold to make it. When it was finished he suspected the goldsmith of making an alloy of the gold with silver, and thus cheating him. Archimedes, the resident genius, was given the task of finding out conclusively.

After the moment of revelation in the bath - the body displacing the water - Archimedes took two balls of metal, one gold, one silver; both the same weight as the crown. The gold ball was smaller, because denser. He sank each, and the crown, in a basin full of water one by one and measured the resultant overflows. He found that although they were the same weight, the gold displaced the least, the silver the most, and the crown somewhere in between -- proving that it was an alloy.

History does not record what happened to the goldsmith, but poor Archimedes was killed in his prime by a Roman soldier in 212 BC in the siege of Syracuse by the Romans. This was generally deplored, even by the Romans, as a very bad thing. History does not record what happened to that soldier, either, though the moment is the subject of a number of art works.

This is what the Museum website says about the exhibition:

“This exhibition presents Archimedes - a key figure of universal culture - to the wider public for the very first time. The staggering significance of his writings matched by his phenomenal intuition in the field of mechanical technology made Archimedes the precursor of the genius and inventor. His name is still synonymous with invention and innovation in industrial production and design. This prompted the idea for an exhibition that would offer concrete testimony not only of his studies but of the city where he lived and of the technical and scientific civilisation that gained ground in the Mediterranean area in the 3rd century BC - and of which Syracuse was a splendid example. In the background are the relations between Syracuse and Alexandria in Egypt, a city visited by Archimedes and many learned figures in the 3rd century BC.

Archimedes' death at the hand of a Roman soldier during the siege of Syracuse in 212 BC was an epoch-making moment for the Ancient world and, paradoxically, marked Archimedes' rebirth, as the Romans started the process that turned him into a legend and celebrated the "divine genius" behind the concept of machines never previously seen.The exhibition then narrates the second rebirth of Archimedes, commenced in the 13th century with the gradual rediscovery of his writings. After catalysing scholars, artists and scientists, Archimedes became a point of reference for the leading lights of the Scientific Revolution, who employed Archimedes' writings to lay the bases for the new science popularised in the 17th century.”

I picked up a few photos of the exhibition from around the web (no photos allowed at the exhibition), but strangely no one seems to have recorded the bath - the BATH! You’ll have to go check it out for yourself.

While you're getting around to it, here's a video that describes how Archimede's Principle really works (as my rough story above does not!):

Posted by Annette Freeman at 10:40 PM