I could apologise for including in this post so many photos of the facade of the Duomo in Orvieto (an Umbrian town), but I think it's justified. That moment when it bursts upon you as you walk through the narrow alley-like streets of the medieval town - magic. You're in dark shadows, you look up, and gasp when the shimmer of the facade glows between the tall buildings. The Rough Guide seemed to enjoy it as much as I did:


Burckhardt described Oriveto's Duomo as "the greatest and richest polychrome monument in the world", while Pope Leo XIII called it "the Golden Lily of Italian cathedrals", adding that on the Day of Judgement it would float up to heaven carried by its own beauty.

Construction of the Duomo took three centuries to complete, starting in 1290 and finishing about 1607. It employed 33 architects, 152 sculptors, 68 painters and 90 mosaicists. Despite this variety of contributions, the result is harmonious and unified. The style is Romanesque segueing into Gothic, and the body of the church is built of alternating stripes of light and dark stone. The thing has to be seen to be believed. Wiki gives the full story of the construction, and describes the riotous facade:


The Gothic façade of the Orvieto Cathedral is one of the great masterpieces of the Late Middle Ages. The three-gable design is attributed to Maitani...The most exciting and eye-catching part is its golden frontage, which is decorated by large bas-reliefs and statues with the symbols (Angel, Ox, Lion, Eagle) of the Evangelists created by Maitani and collaborators (between 1325 and 1330) standing on the cornice above the sculptured panels on the piers. In 1352 Matteo di Ugolino da Bologna added the bronze Lamb of God above the central gable and the bronze statue of Saint Michael on top of the gable of the left entrance.
The bas-reliefs on the piers depict biblical stories from the Old and New Testament. They are considered among the most famous of all 14th century sculpture. These marbles from the fourteenth and fifteenth century are the collective and anonymous work of at least three or four masters with assistance of their workshops, It is assumed that Maitani must have worked on the reliefs on the first pier from the left, as work on the reliefs began before 1310. The installation of these marbles on the piers began in 1331. 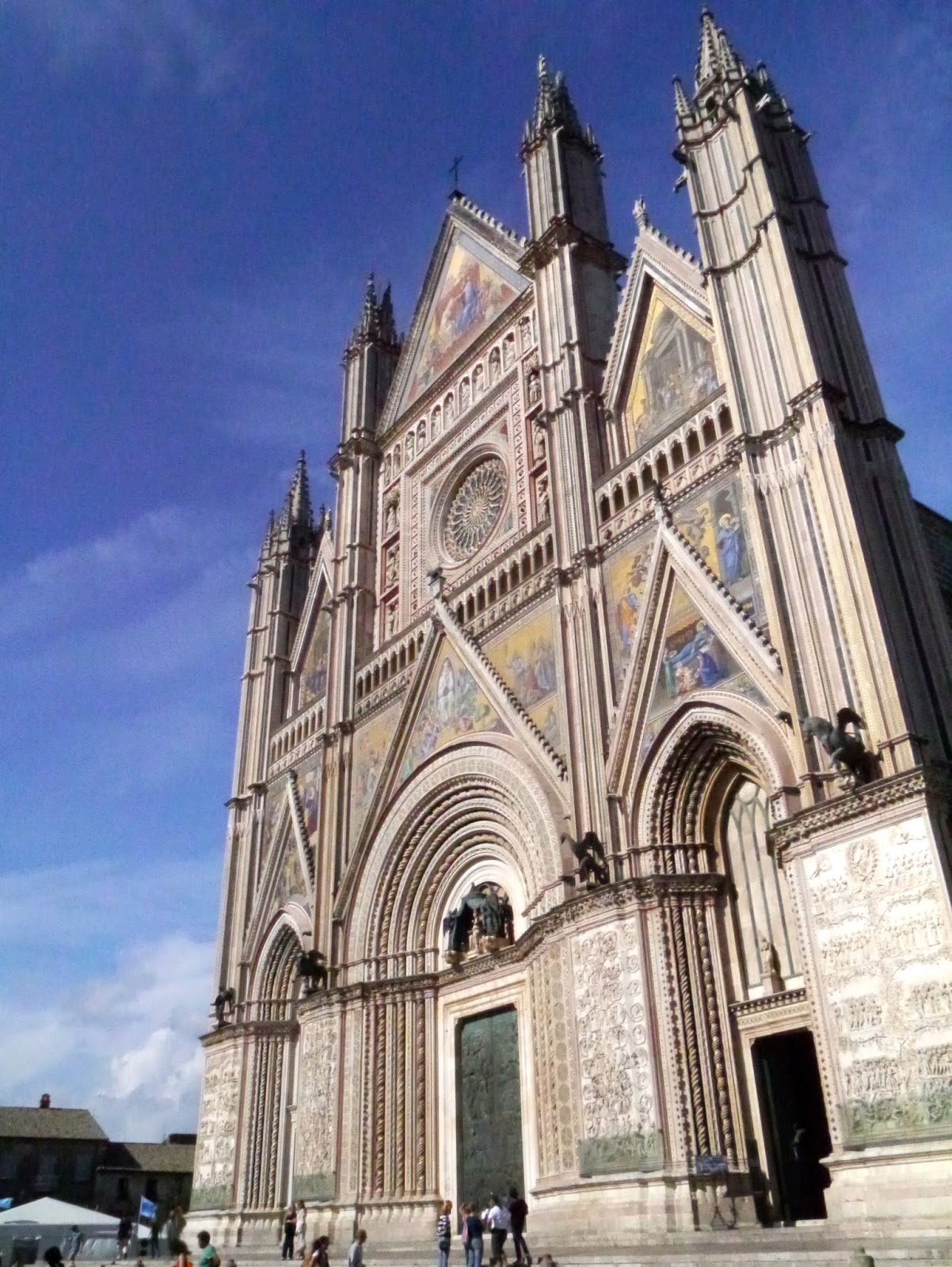 As the Rough Guide puts it, "the facade is the star turn, owing it undeniable impact to a decorative richness just the right side of overkill. It's a riot of columns, spires, bas-reliefs, sculptures, dazzling and almost overpowering use of colour, colossally emphasised doorways and hundreds of capricious details just about held together by four enormous fluted columns."

The Duomo was, it's said, built to commemorate "The Miracle of Bolsena" - Bolsena is a nearby town. The miracle occurred when a doubtful monk was re-converted when the wine he was using in the eucharist turn into the actual blood of Christ and dripped onto the corporale, the cloth underneath the chalice on the altar. This Holy Corporale is still on display inside the Duomo in the Cappella del Corporale, a chapel covered in frescoes by Ungolino di Prete.

Ungolino also painted the frescoes in the apse, many of which were restored by Pinturicchio. In an anecdote that makes these medieval painters more than just names and paintings, the Rough Guide repeats the story that Pinturicchio was eventually kicked off the job for "consuming too  much gold, too much azure and too much wine."


The alternating stripes of black and white marble show in the interior of the Duomo also. It is often compared to the cathedrals in Sienna, Pisa and Florence, which use similar stripes - it's generally conceded that Orvieto's Duomo exceeds them all.

But not only does the Duomo have its glorious facade and its Holy Corporale, it also has, in a chapel on the right of the apse, a fresco cycle of 'The Last Judgement' by Luca Signorelli, said to rival that of Michelangelo in the Sistine Chapel. I agree. That's why Signor Signorelli's masterpiece is going to get a blog post all of its own. Watch this space. 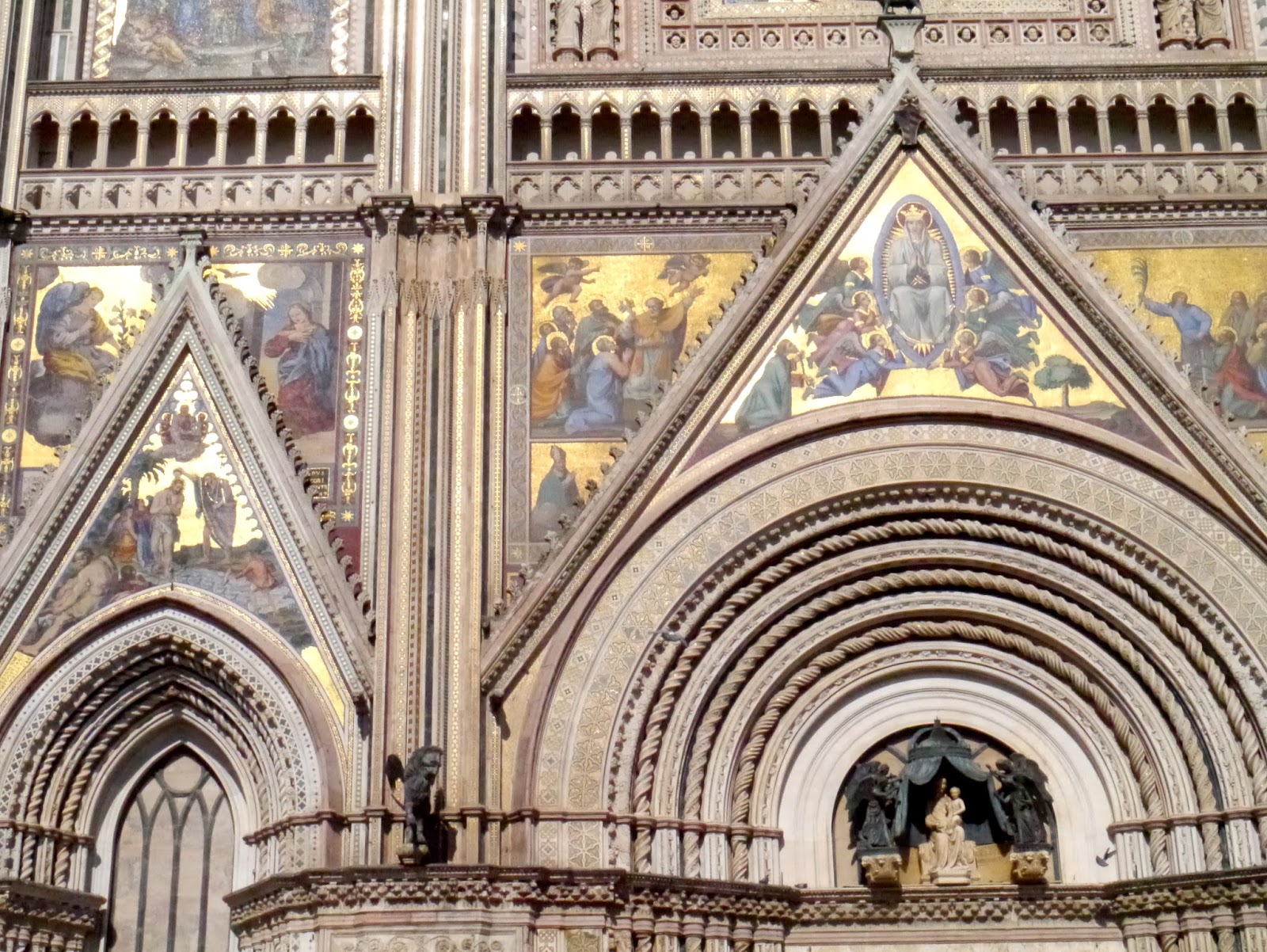 Posted by Annette Freeman at 8:53 AM