The Patron Saint of Lost Causes

In the overwhelming task of figuring out the stories of the Roman Catholic saints - there are too many of them for one lifetime to be long enough - I occasionally come across a particularly revered saint. One such is Santa Rita, known as the patron saint of lost causes. If you have something really appalling to work on, Santa Rita is the gal - particularly if it’s connected with children or husbands, because unusually amongst saints (setting aside the Madonna herself, of course), Santa Rita had both.

On a visit to Santa Rita’s town, the hill town of Cascia in Umbria, ask the locals to tell you Santa Rita’s story. It will be more interesting, and certainly more heartfelt, than merely looking it up on Wikipedia. You may be told that Santa Rita was a “born a saint” -- this is because of the story of when she was just a small baby in her cradle, possibly on the day of her baptism (she was born in 1381), a swarm of bees invaded, even flying into her mouth - but she was unharmed. In some versions, a visiting doctor (or possibly priest) who came to check on the miraculous baby, was cured of a withered arm. Her first miracle! That’s why bees are part of Santa Rita’s iconography.

Rita lies in state in Cascia, but was born in another village nearly, Roccaporena, where there's also a much-visited pilgrimage site. This is not surprising, as an Italian Wiki site tells us that Santa Rita's attributes are that she is the Saint of the Impossible, the Advocate of Hopeless Causes, and the Patron Saint of unhappily married women, desperate and seemingly impossible cases, and protector of screen printers. (I have no idea why the screen printers adopted her).

Santa Rita grew to young womanhood, very pious, but was married off to a tyrannical nobleman who was not a good husband (“insults, physical abuse and infidelities”, says Wiki). That’s why she’s the right saint for abused wives. Despite her best efforts he was difficult to convert, especially when it came to a feud with another local family of nobles. Eventually he was killed in this pointless cause, and Santa Rita had no end of trouble keeping her sons out of the feud too. They both died of dysentery, which was possibly Divine Act to keep them out of the trouble.

Santa Rita then applied to enter the local convent - Augustinians, which is why she’s usually portrayed in the Augustinian black and white habit (though in the 14th century the Augustinians in fact wore a sort of drab brown). However, since she’d been married for 18 years and had two sons, the Reverend Mother set her some tough tasks before she’d let Santa Rita in. One was to settle the feud between the warring families,which Santa Rita somehow accomplished.

Another was to plant and water a dead stick of grape vine, which Santa Rita also did, tending it for ages until - miraculously! - it sprouted and even produced grapes. The wine made from them was sent to the Pope to use in the Vatican. Not only that, but some say that this vine is still growing today, and still producing.

Santa Rita became a devout nun, and was even said to practice self-flagellation. In any event, possibly because she prayed so intently before a crucifix (her ‘ecstasy’), she was smitten with a sore on her forehead, as if a thorn from Christ’s crown of thorns had fallen and pierced her. This remained a suppurating wound for 15 years, until the day when she finally met the Pope, at which point it cleared up. That’s why effigies of Santa Rita have a red spot on their foreheads.

As you climb up to the pilgrimage church where Santa Rita lies in state in Cascia, you’ll notice many little shops selling religious souvenirs, prominent amongst which are fake roses. Why roses? you might ask the shopkeeper. Because of yet another miracle from Santa Rita’s death bed. Lying in bed at the end of her life, a cousin asked her what would comfort her. Santa Rita asked her to go to her home village and pluck a rose for her. The cousin was sceptical - it was February - but went as requested and found -- yes, a rose in bloom. There was also a fig collected, in some versions, but the fig doesn’t seem to have made it quite so prominently into the iconography.

Being a very special saint, Santa Rita did not disappoint after her death. Her body is one of that select group of saints which remains “incorrupible”.

If you’d like to know more about this, frankly, weird phenomenon, it is time for Wiki:


In Roman Catholicism, if a body remains incorruptible after death, this is generally seen as a sign that the individual is a saint. Not every saint, however, is expected to have an incorruptible corpse. Although incorruptibility is recognized as supernatural, it is no longer counted as a miracle in the recognition of a saint.
Embalmed bodies were not recognized as incorruptibles. For example, while the body of Pope John XXIII remained in a remarkably intact state after its exhumation, Church officials quickly remarked that the body had been embalmed and additionally there was a lack of oxygen in his sealed triple coffin.
Incorruptibility is seen as distinct from the good preservation of a body, or from mummification. Incorruptible bodies are often said to have the odor of sanctity, exuding a sweet or floral, pleasant aroma.

This slightly spooky site (in Spanish) has more info, and pictures.

I visited Santa Rita in her pilgrim’s church on top of the hill in Cascia. The church was built in the early 20th century and is distinguished by some of the most garish, inartistic, luridly-coloured painted ceiling murals you’re ever likely to find. But in a very large side chapel Santa Rita rests, in her historically-incorrect black and white habit, under a golden canopy. In front is a handsome iron grill where many pilgrims stand praying for their own particular lost cause. In a long array of glass-fronted cabinets around the side chapel are many objects left for Santa Rita by supplicants whose requests the Saint has granted. People bring their most precious things for her - it’s very touching. Inside the cabinets are silver-framed photos of loved ones, wedding rings, other jewellery, and many, many soccer trophies.

The Catholic church has a very rich tradition that clearly fills the lives of its followers with much that they love and revere. And it must be good to know that there’s an intermediary to visit when you’re beset with a hopeless cause. 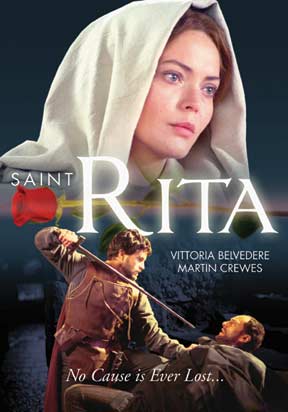 Footnote: In 2007, Santa Rita's life (loosely) inspired a movie, particularly about her early experiences. It seems a little pointless to object that the story line seems to deviate a lots from the, er, 'truth'. It's had good reviews and you can buy your own copy on Amazon.

And the move tagline says...

Posted by Annette Freeman at 1:04 PM