I don't know much about ancient architecture, but I can easily learn to pick the difference between the cool classic lines of the Renaissance, and the wild, contorted exuberance of the Baroque. And if you’d like to see baroque church architecture at its wildest, Rome is the place for you. There are many examples to which I could point you - the Gesù church, for one spectacular one - but for sheer cleverness and artistry with perspective, nothing can beat the Church of St Ignatius - The Church of St. Ignatius of Loyola at Campus Martius, to give it’s full name. Both churches are Jesuit establishments, and in fact the clever perspective tricks at St Ignatius are the work of a Jesuit lay brother named Andrea Pozzo (who lived from 1642 to 1709) - in fact, he was a painter and architect, decorator, stage designer, and art theoretician. 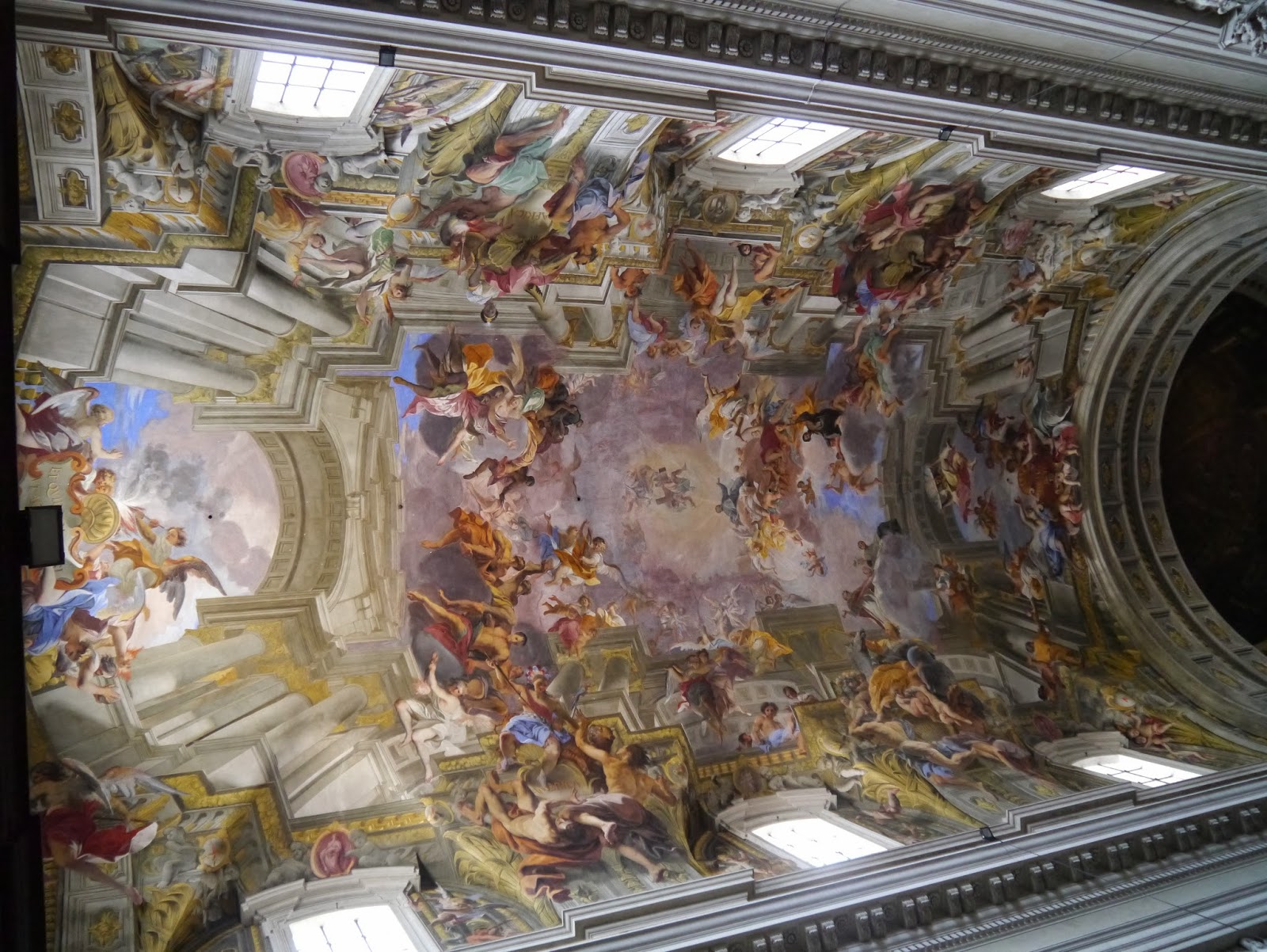 
Pozzo was best known for his grandiose frescoes using illusionistic technique called quadratura, in which architecture and fancy are intermixed. His masterpiece is the nave ceiling of the Church of Sant'Ignazio in Rome. Through his techniques, he has become one of the most remarkable figures of the Baroque period....Initially he was used as a stage designer for biblical pageants, but his illusionistic paintings in perspective for these stages gave him soon a reputation as a virtuoso in wall and ceiling decorations...

His masterpiece, the illusory perspectives in frescoes of the dome, the apse and the ceiling of Rome's Jesuit church of Sant'Ignazio were painted between 1685–1694 and are a remarkable and emblematic creation of High Roman Baroque. For several generations, they set the standard for the decoration of Late Baroque ceiling frescos throughout Catholic Europe.

Having heard of this famous ceiling, I stopped in to Sant’Ignazio to have a look. On my first visit, it was near dusk and the church was dim. The Pozzo fresco was, nevertheless, startling. I returned the next day when the light was bright, and managed to get a cricked neck staring up at the dramatic illusions above. There’s a brass disc on the floor to guide you to the best viewing point, but the ceiling looks astounding from wherever you stand. Like much High Baroque, some of the figures at the edges appear to fall into the viewer’s space. But Pozzo’s ceiling’s unique feature is the soaring trick of perspective that looks as if the roof of the church rises many metres into the air, supported on columns. 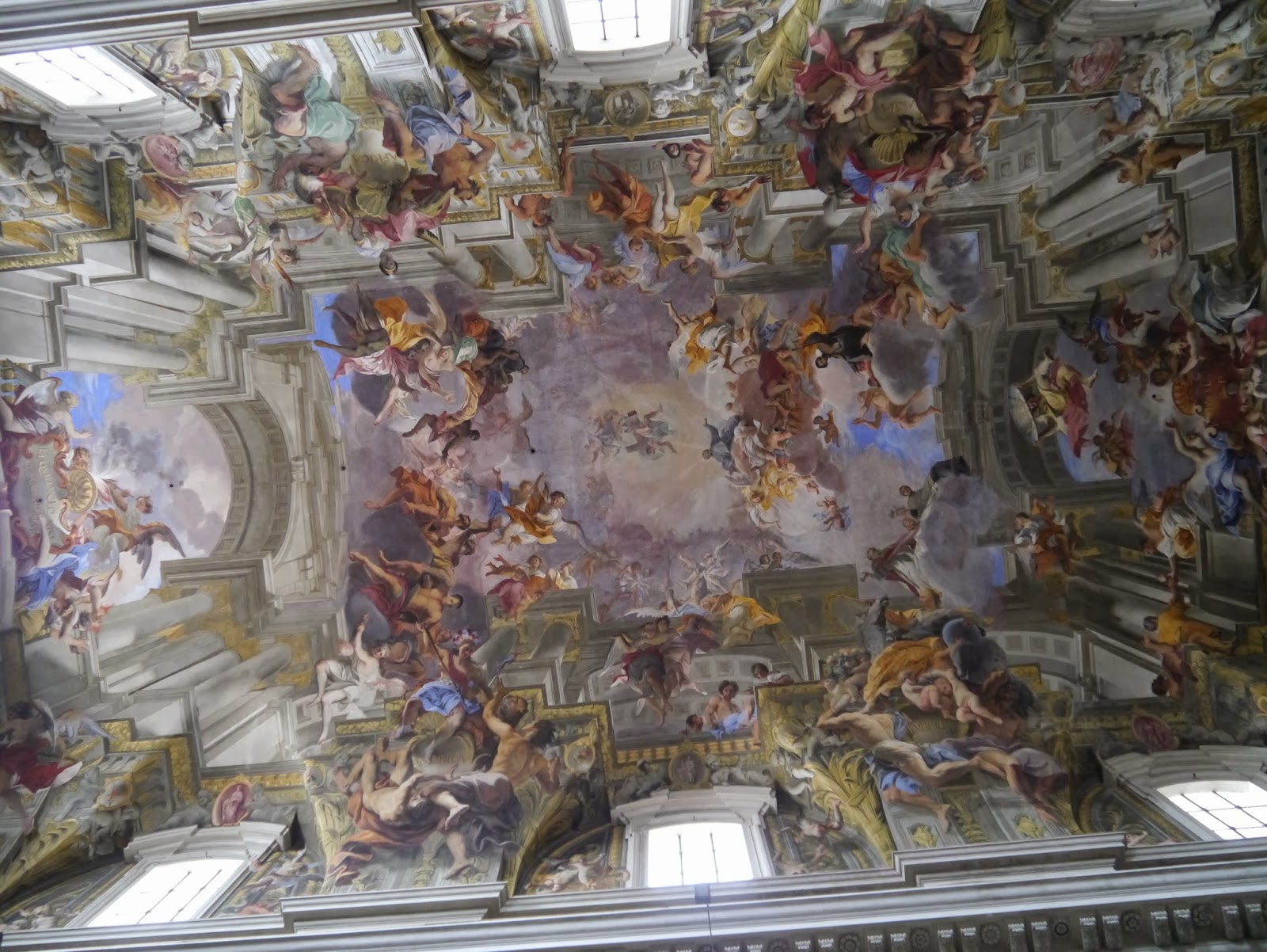 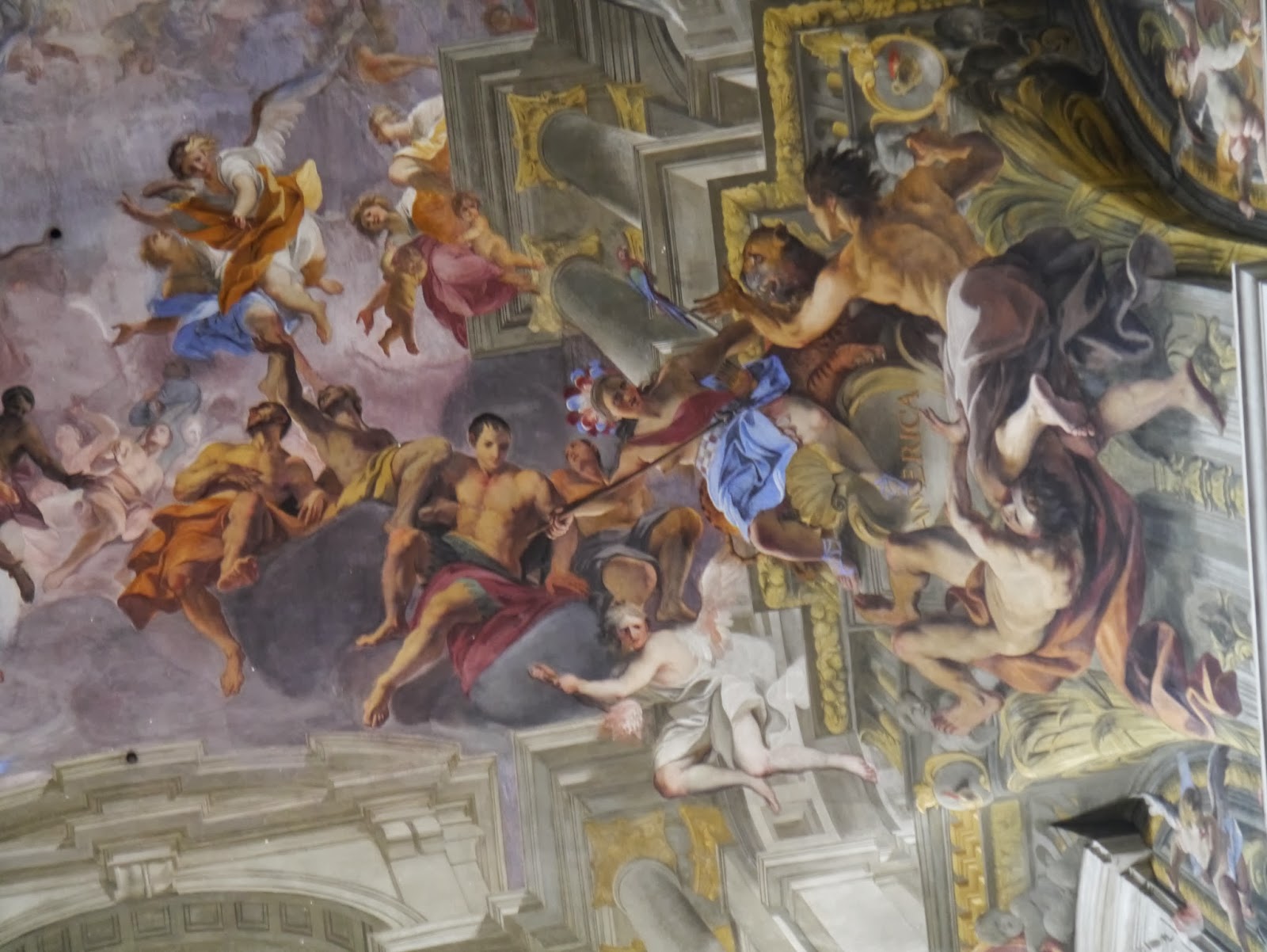 
Andrea Pozzo, a Jesuit lay brother, painted the grandiose fresco that stretches across the nave ceiling (after 1685). It celebrates the work of Saint Ignatius and the Society of Jesus in the world presenting the saint welcomed into paradise by Christ and the Virgin Mary and surrounded by allegorical representations of all four continents. Pozzo worked to open up, even dissolve the actual surface of the nave's barrel vault illusionistically, arranging a perspectival projection to make an observer see a huge and lofty cupola (of a sort), open to the bright sky, and filled with upward floating figures.

Then there’s a peculiar false dome, painted on canvas - to avoid the cost of building a real dome. This is darker, and harder to appreciate (though there’s also a helpful brass disc on the floor for viewing this too). Wiki says:


A second marker in the nave floor further east provides the ideal vantage point for the trompe l'oeil painting on canvas that covers the crossing and depicts a tall, ribbed and coffered dome. The cupola one expects to see here was never built and in its place,in 1685, Andrea Pozzo supplied a painting on canvas with a perspectival projection of a cupola. Destroyed in 1891, the painting was subsequently replaced. 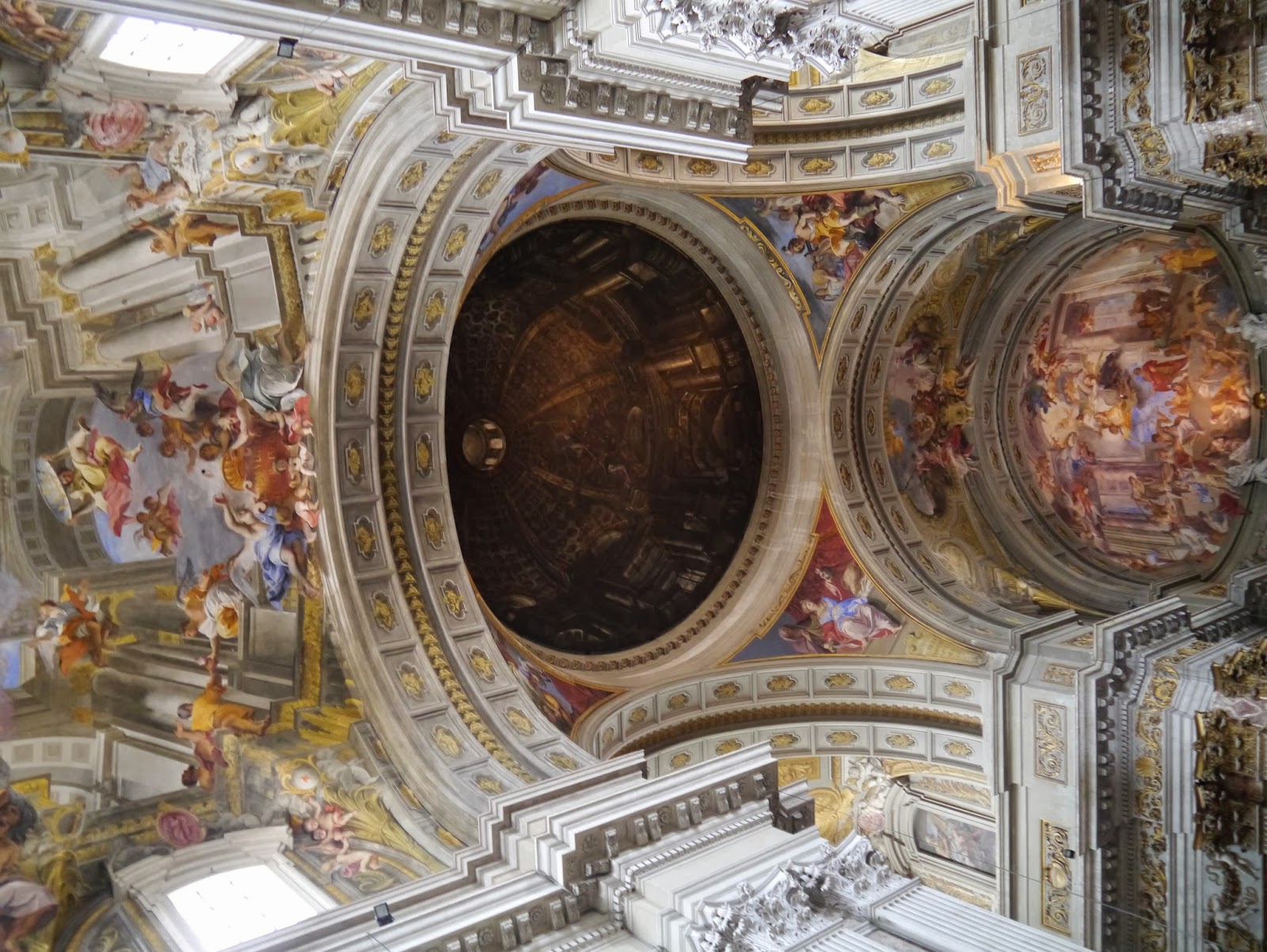 The pendentives at the lower corners of the ‘false dome’ are also worth a mention:


...in the pendentives rather than placing the usual evangelists or scholarly pillars of doctrine, he depicted the victorious warriors of the old testament: Judith and Holofernes; David and Goliath; Jael and Sisera; and Samson and the Philistines. It is said that when completed, some said (sic)"Sant'Ignazio was a good place to buy meat, since four new butchers are now there."(source) 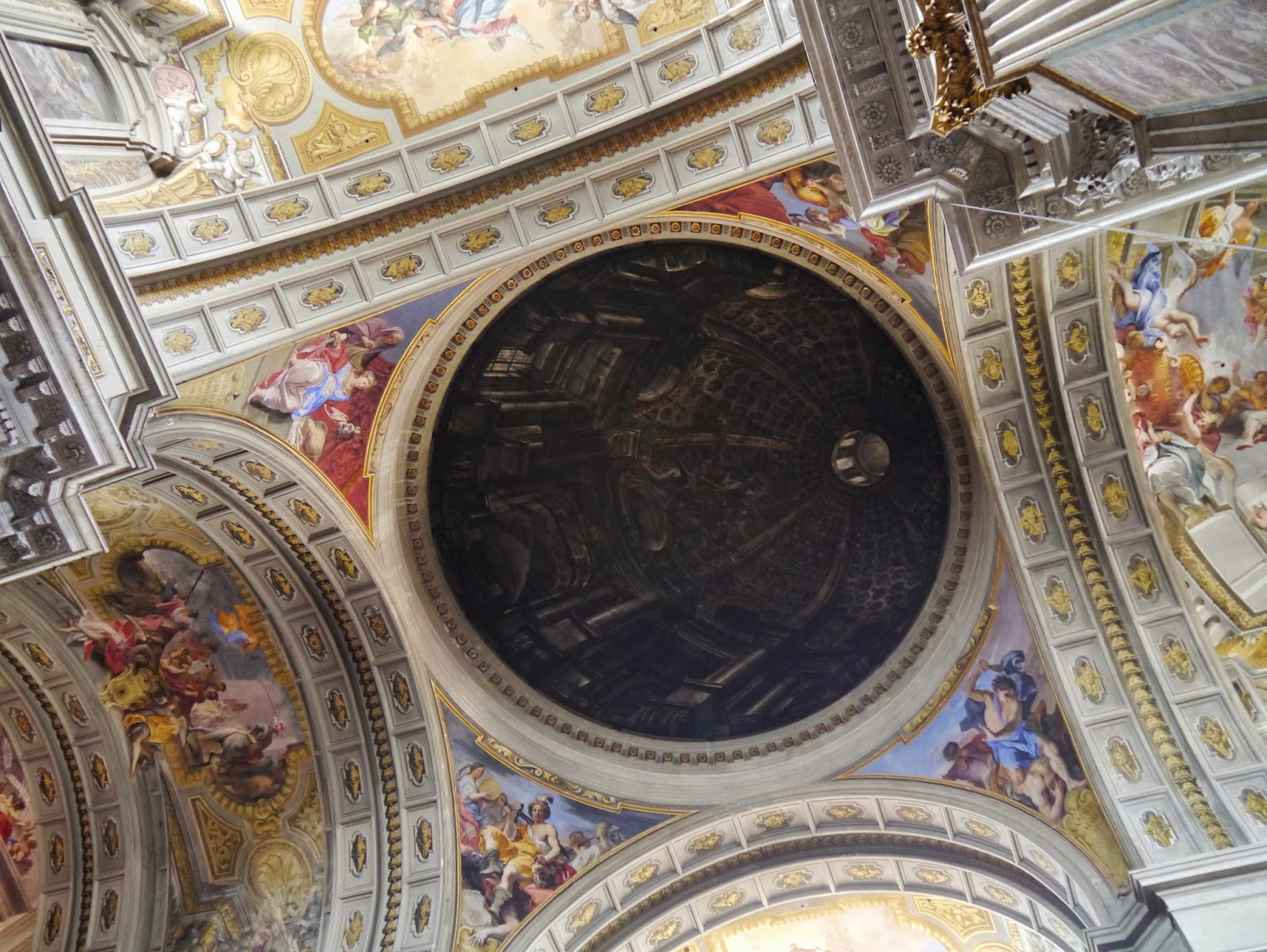 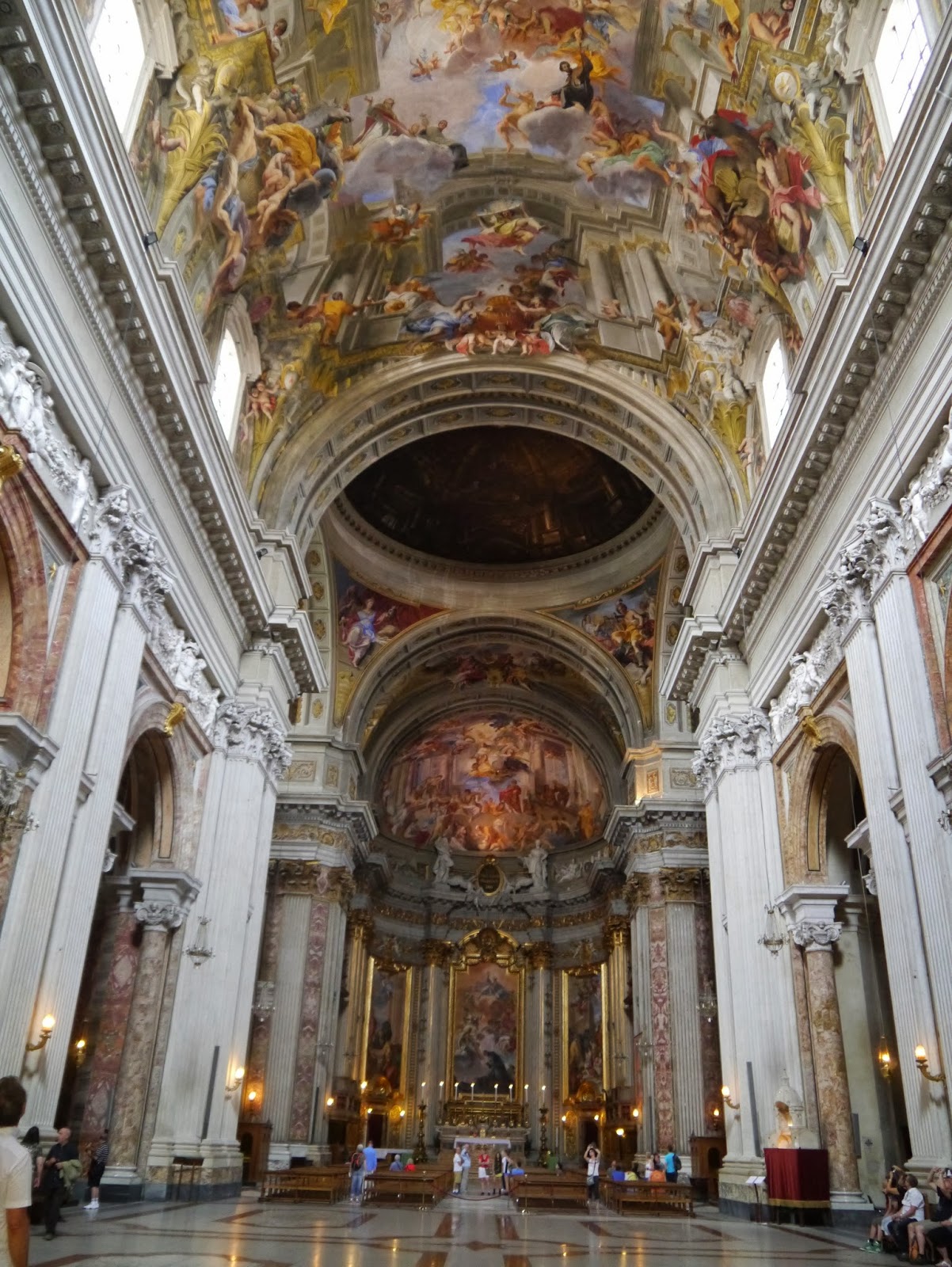 You can read the interesting history of the church of Sant’Ignazio here  - it began life around 1626 as a chapel for the Collegio Romano next door. As befits a monument to High Baroque, it’s full of over-the-top chapels and shrines. This is the official church site.

A further curiosity in Sant’Ignazio is a chapel  in the right transept, dedicated to St. Aloysius Gonzaga. There is a large marble high-relief depicting St. Aloysius Gonzaga in Glory (1697–99) by the French sculptor Pierre Legros. Andrea Pozzo painted the ceiling which also shows the Glory of the Saint. Buried in the side altar next to Gonzaga is Cardinal St. Robert Bellarmine.

Bellarmine has the distinction of being the Inquisition priest who ordered the burning at the stake of Giordano Bruno, whose statue stands today looking broodingly over the Campo dei Fiori, where he died. Bellarmine was also the church official who cross-examined Galileo in an effort to get him to recant his astronomical views. Bellarmine is a saint now.

In something of a contrast, St Aloysius Gonzaga was a Mantuan nobleman who joined the Jesuits (regular readers might recall the Gonzaga Family from this blog's post on Mantua). While still a student at the Roman College, he died as a result of caring for the victims of an epidemic. He was beatified in 1605, and canonized in 1726.

The chapel just to the right of the church's presbytery (at the south-east corner) houses the funeral monuments of Pope Gregory XV and his nephew, Cardinal Ludovisi, the church's founder. Pierre Legros and Pierre-Étienne Monnot made Gregory XV's monument some sixty years after Gregory's death.

Posted by Annette Freeman at 9:53 AM