Most reviews of the Protestant Cemetery in Rome would begin with an illustration of the headstone of Keats's grave - and for good reasons. But this one above caught my fancy. In fact, the correct name for this place is 'The Non-Catholic Cemetery" - it embraces people from a variety of religious backgrounds, all of whom died far from their native shores, in Rome. Not that being buried in The Protestant Cemetery is necessarily a bad thing -- Shelley was said to have remarked, after a visit, that it almost made one look forward to dying, to imagine lying here. It is, for a cemetery, a very beautiful and peaceful place - as you can see by these photos.


"It might make one in love with death, to be buried in so sweet a place." - Shelley 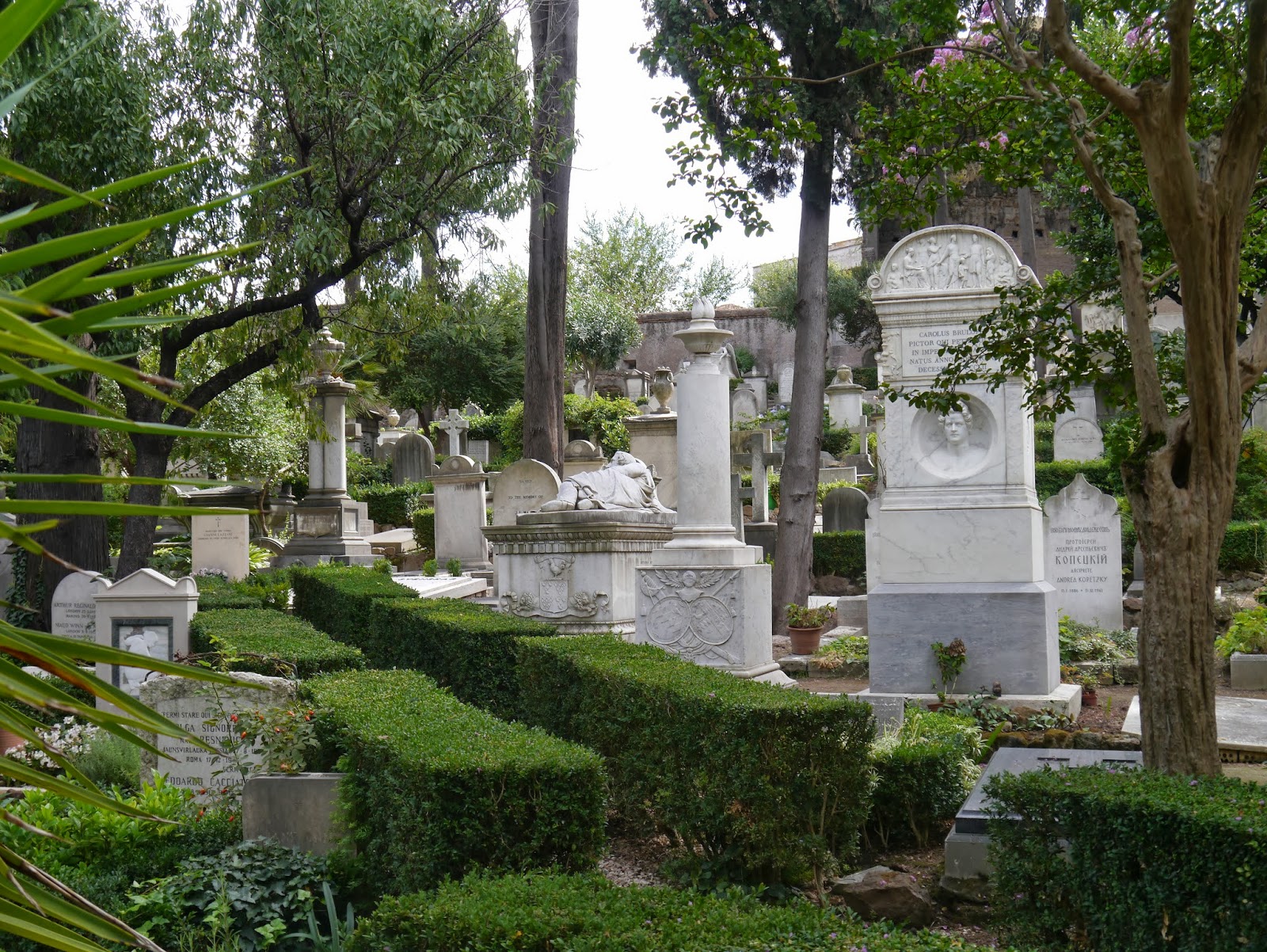 When the cemetery for non-Catholics was first established, on the outskirts of Rome near St Paul's Gate in the Aurelian Walls, the Pope had final say over who could be buried there and what the tombstones could look like. For a while, crosses were not permitted, and no inscriptions that might imply that the deceased could have made it into heaven -after all, anyone outside the Church could not expect that. However, since about the mid-19th century, things have been a bit less strict.

In addition to being with view of Ports San Paulo, the Cemetery is also beneath another ancient Roman monument, the Cestius Pyramid - presently under the tender care of preservationists, and so shrouded in scaffolding in these photos. The Pyramid dates from the 1st century BC and was built as a monument to the memory of one Caius Cestius, who was probably a politician - not much is known of him, except that this pyramid has handed down his name to posterity. It was later incorporated into the city walls.

And here is Keats's gravestone, remarkable for many reasons. You'll notice that it doesn't bear his name or birth date, merely an inscription "Here lies one whose name was writ in water." Keats died in 1821 in Rome, in his lodgings near the Spanish Steps, which can be visited today. But he had only been in the city about four months. He was a mere 26 years old.

Next to Keats's grave is that of his friend Joseph Severn, who had cared for him during his last days, and whose gravestone bears Keats's name as well as his own.."Dedicated friend and death-bed companion of John Keats". Severn died 61 years after Keats. 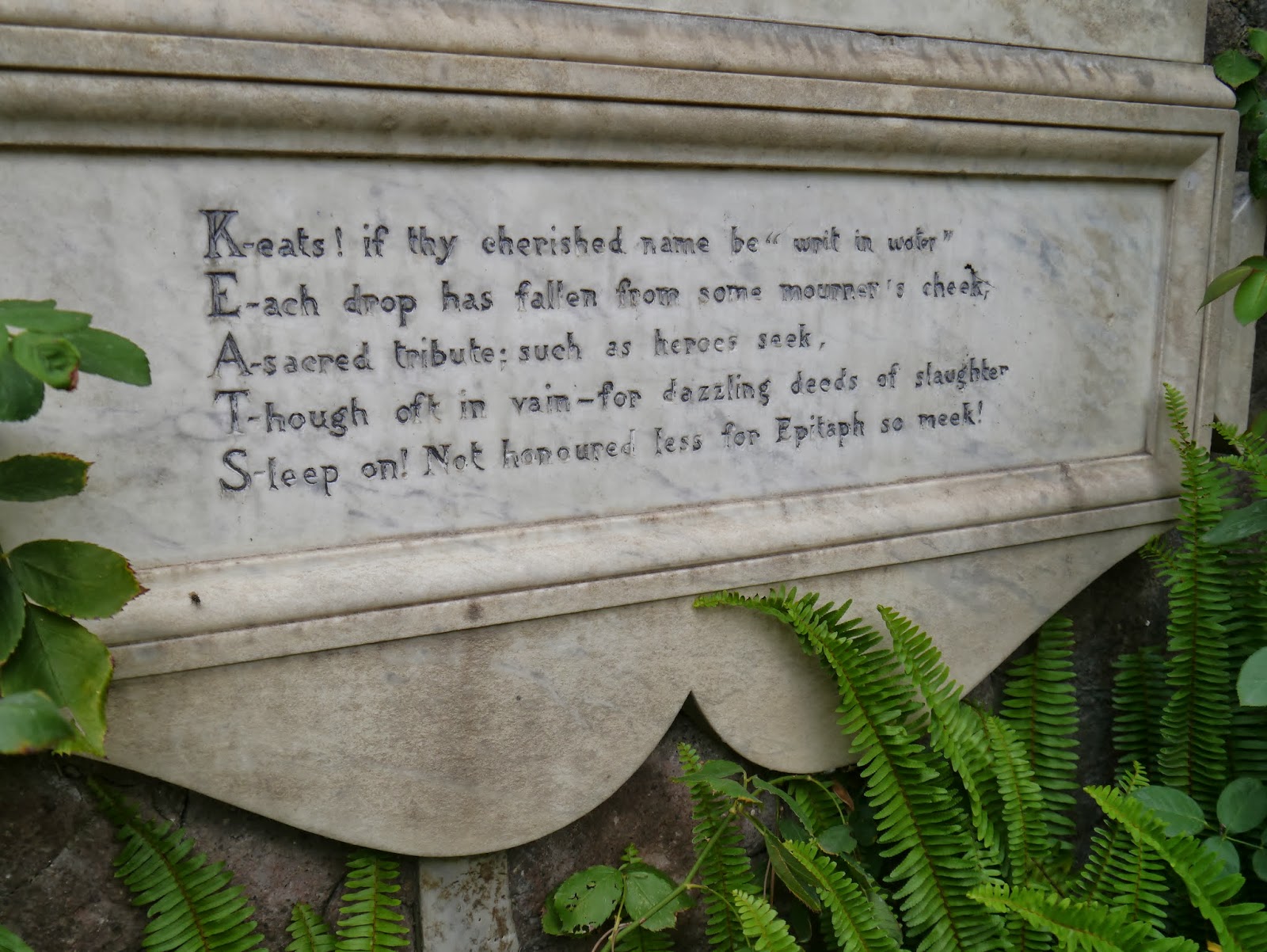 In The Protestant Cemetery, near Keats' resting place, a plaque takes issue with his wish to be remembered as one whose name was "writ in water"... 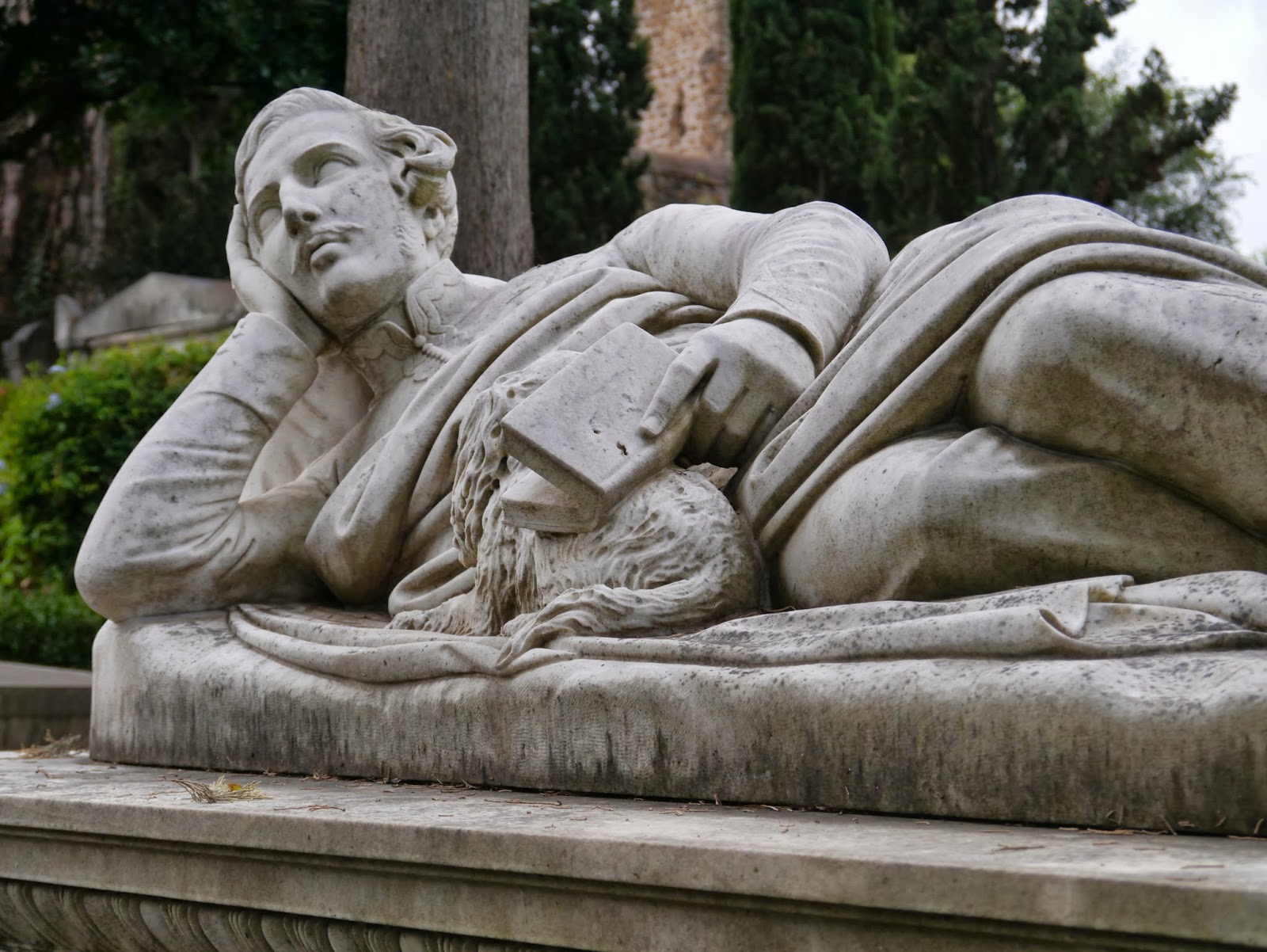 The Cemetery is full of intriguing monuments - some tasteful and discreet, covered in delicate ivy; others floridly Victorian. Some are modern, since the Cemetery remains a working cemetery where people - non-Catholics, of course - are laid to rest. (In fact, the guide books tells me that there are some Catholics Italians resting here too, perhaps choosing to be beside family or friends. Antonio Gramsci, who was laid here in 1937, was one of the founders of Italian Communism). 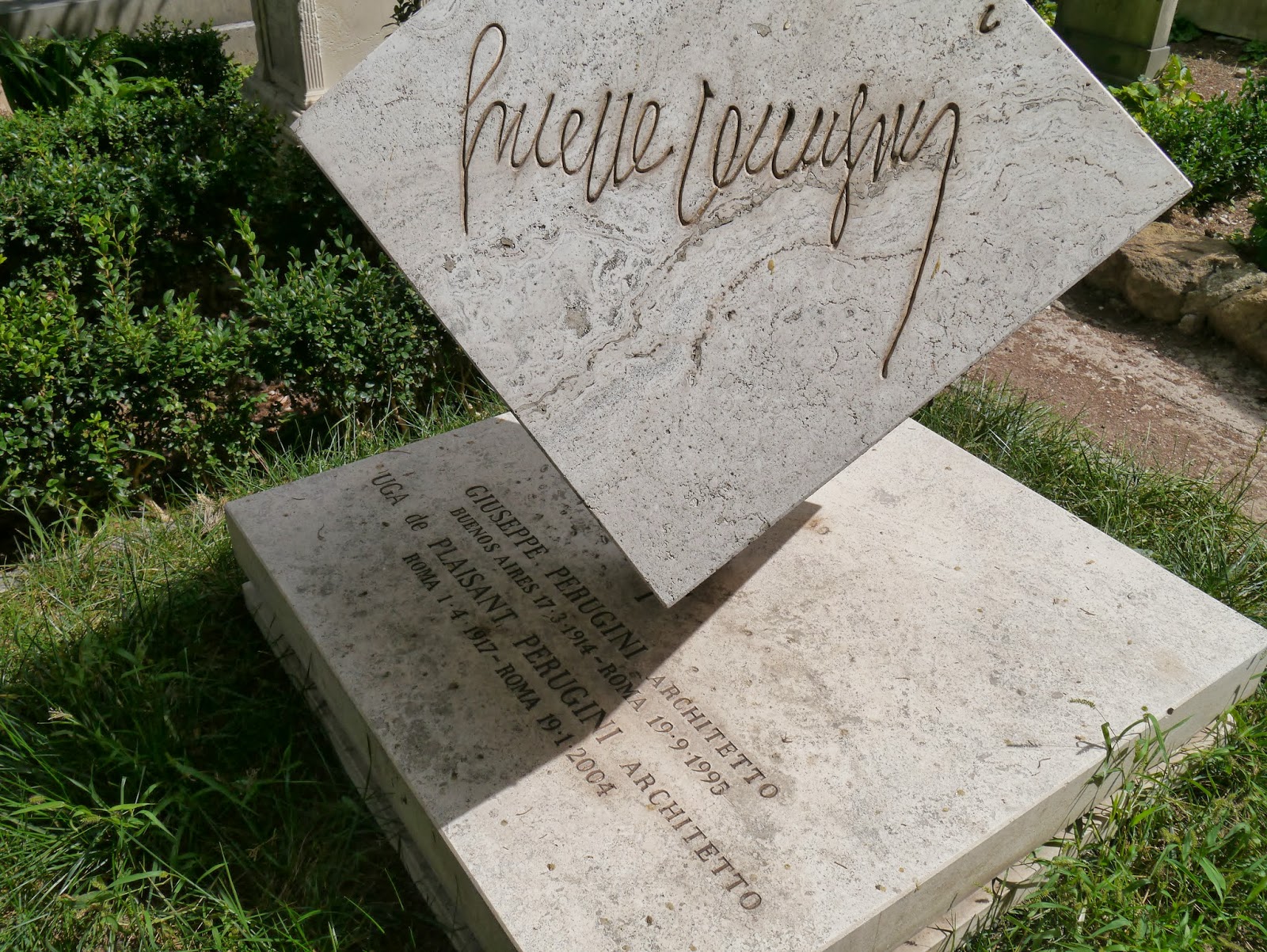 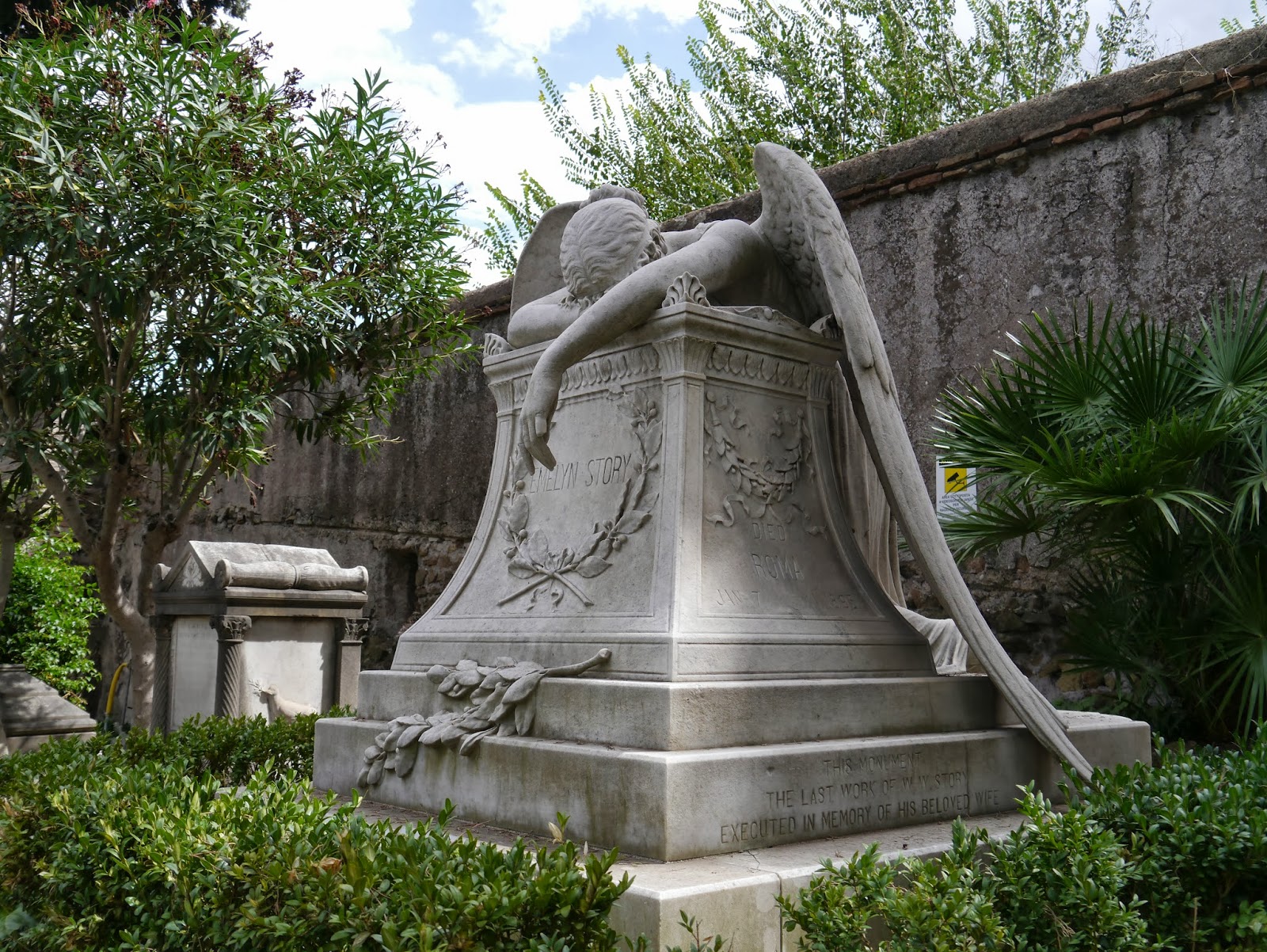 This particular monument has become something of a symbol of the Cemetery. The weeping angel, known as "The Angel of Grief", was sculpted by the American sculptor and poet WW Story, to commemorate his wife. He's now buried with her, under the Angel. A replica of this monument was erected at Stanford University in California to the memory of victims of the 1906 earthquake. 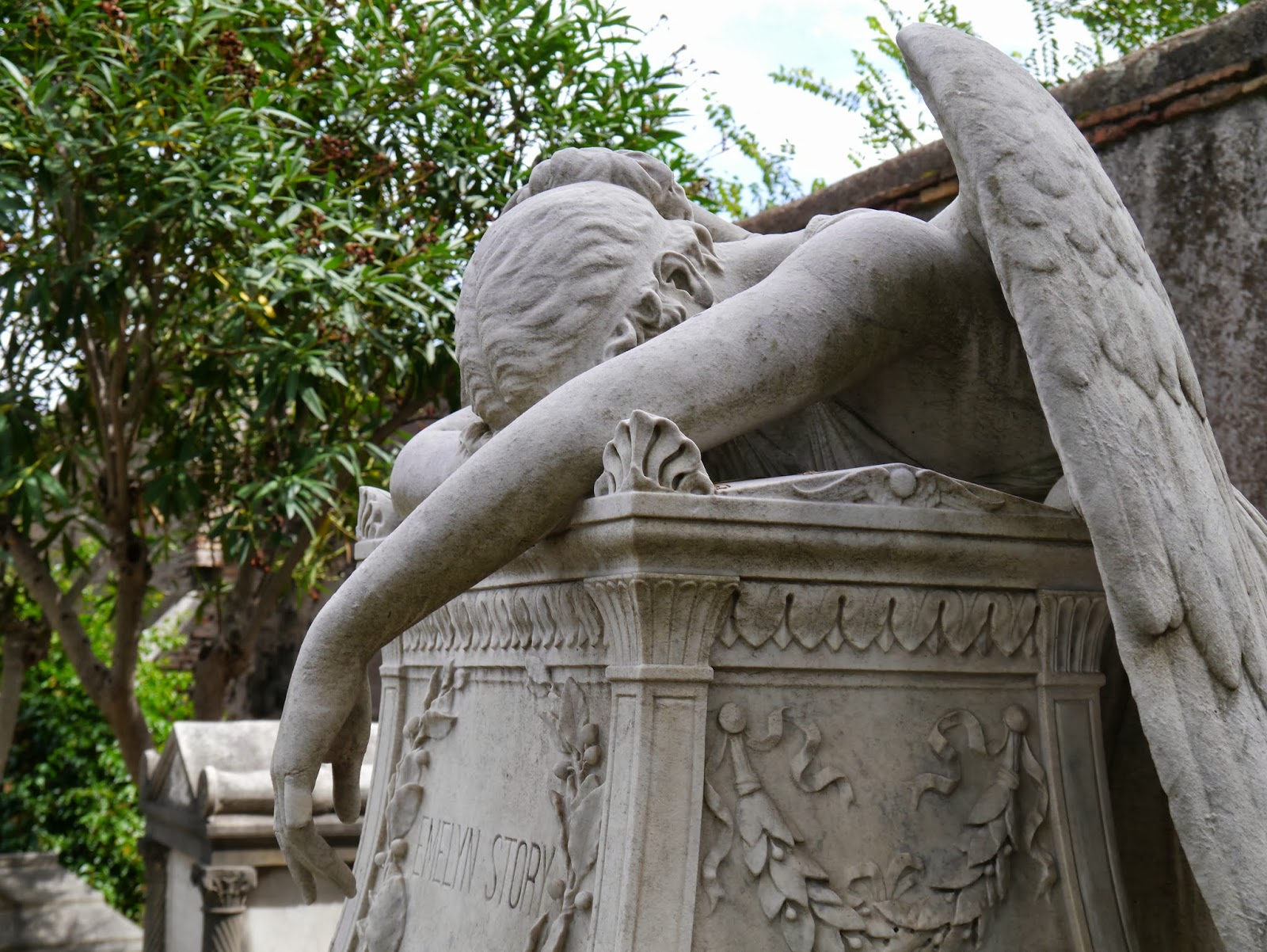 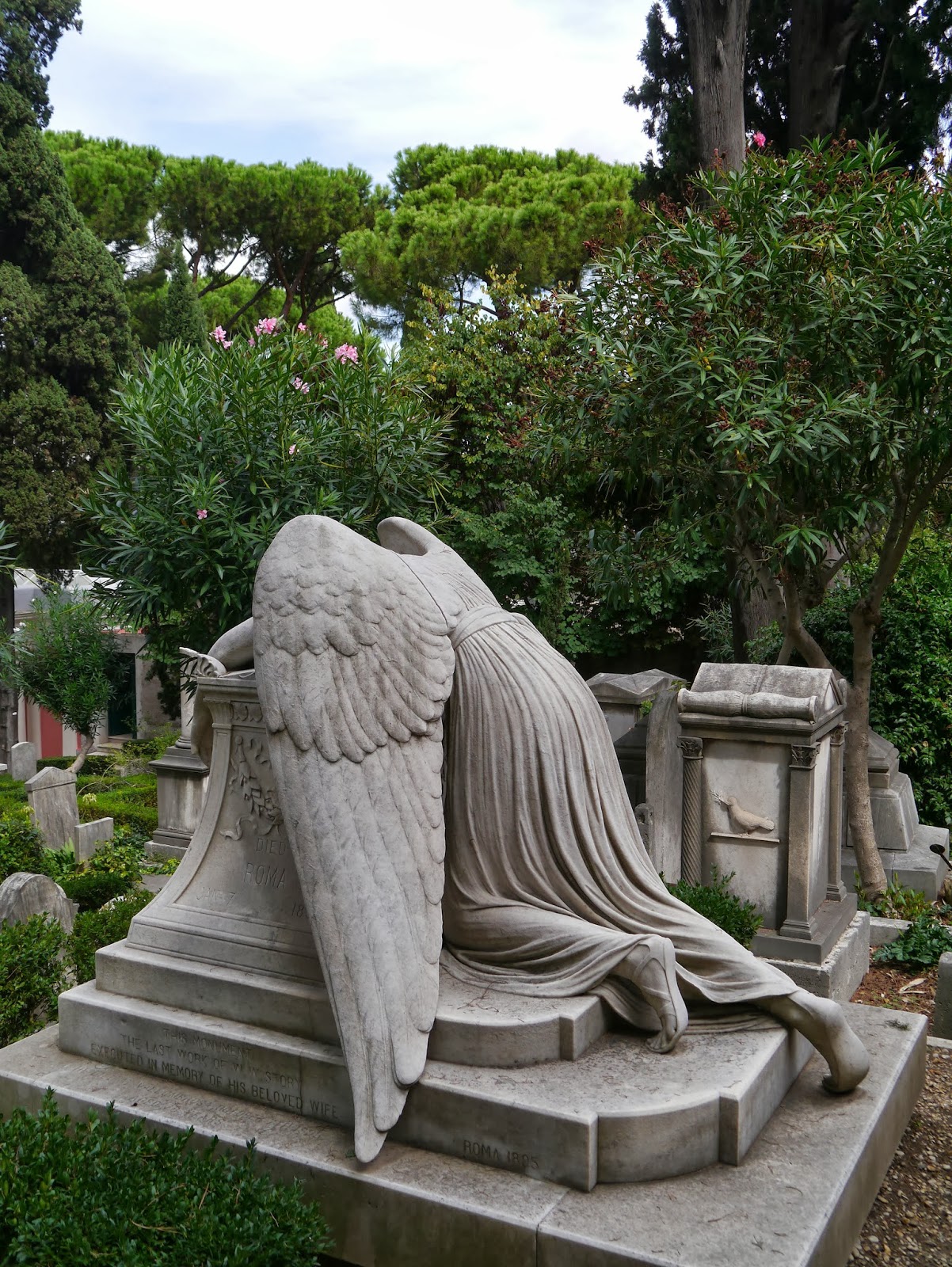 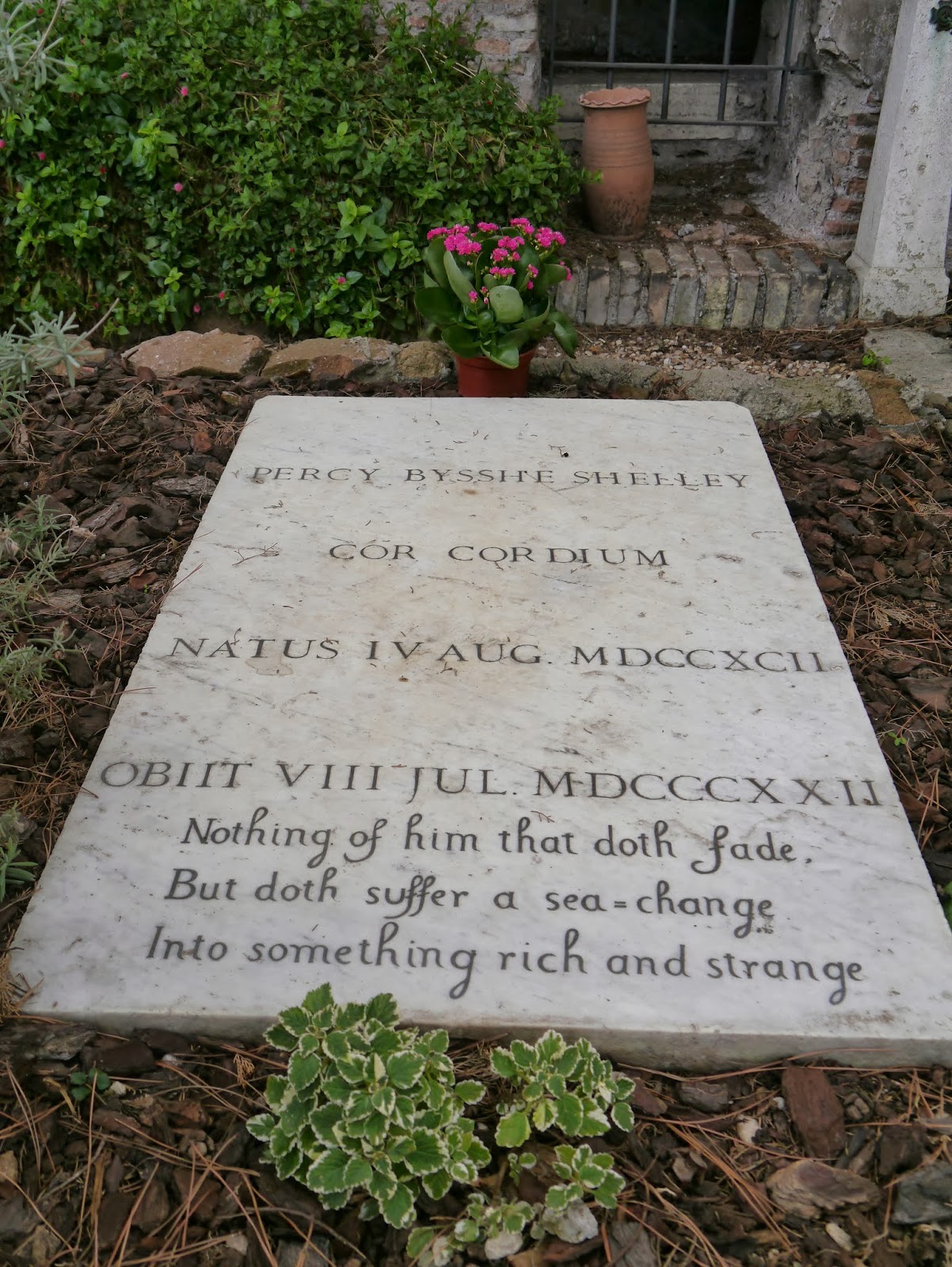 And here lies another English poet - Percy Bysshe Shelley, who chose words from Shakespeare's "The Tempest" for his resting place: 'Nothing of him that doth fade / But doth suffer a sea-change / Into something rich and strange.' 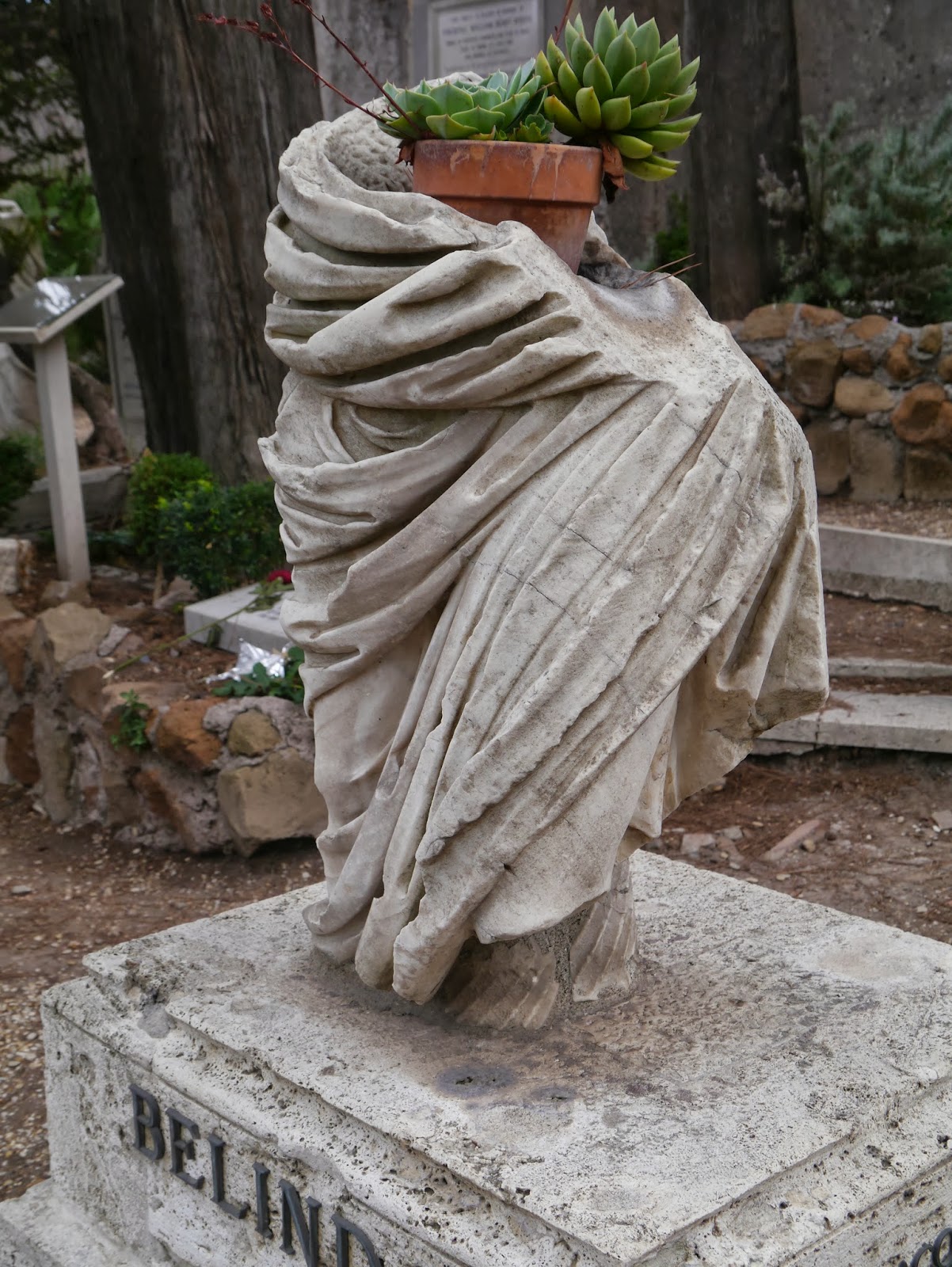 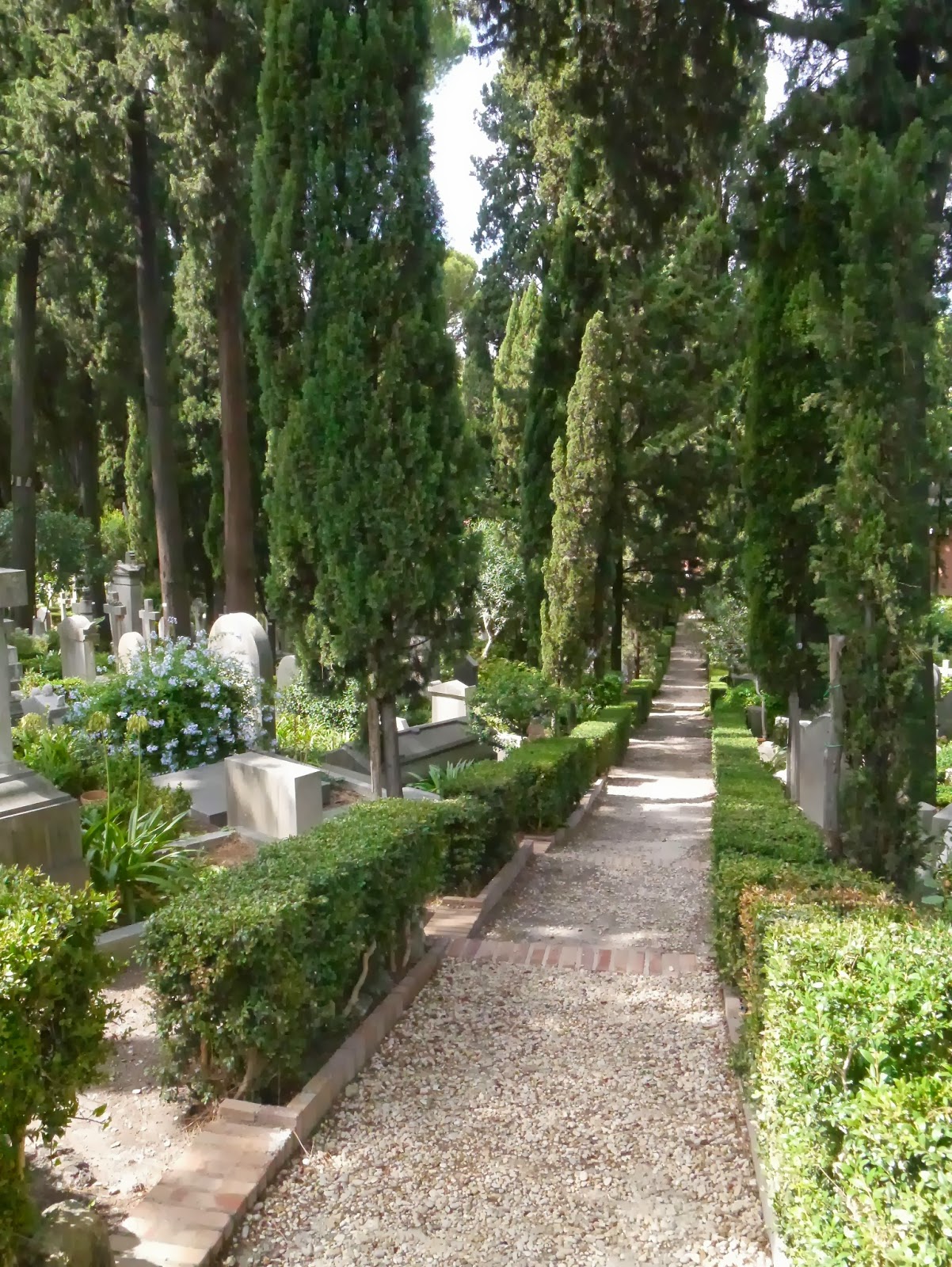 The great German poet Goethe visited the Cemetery during his stay in Rome in 1786, and apparently toyed with the idea of being buried there. His son August now is, his gravestone decorated with a medallion portrait by the sculptor Thorvaldsen. 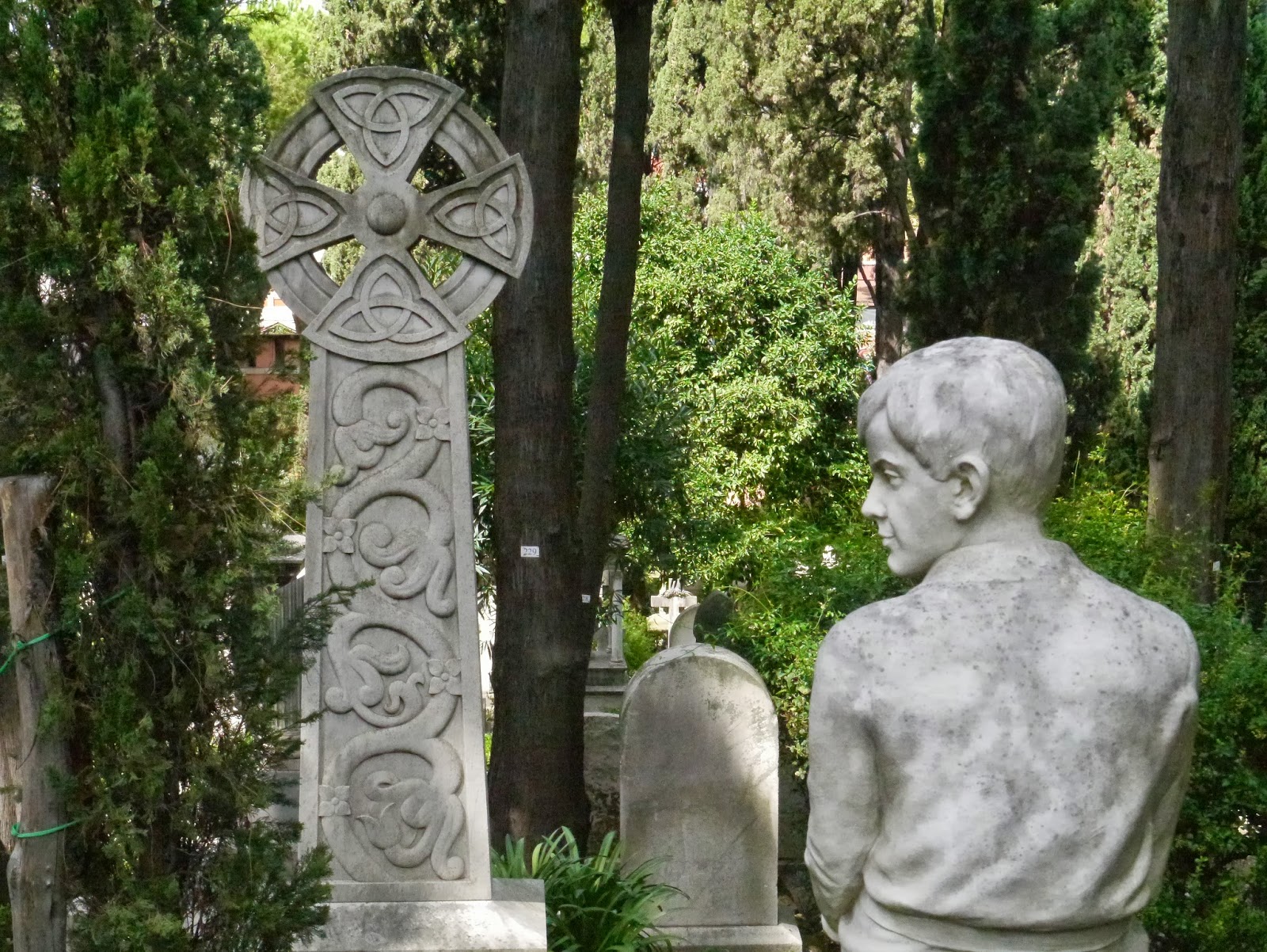 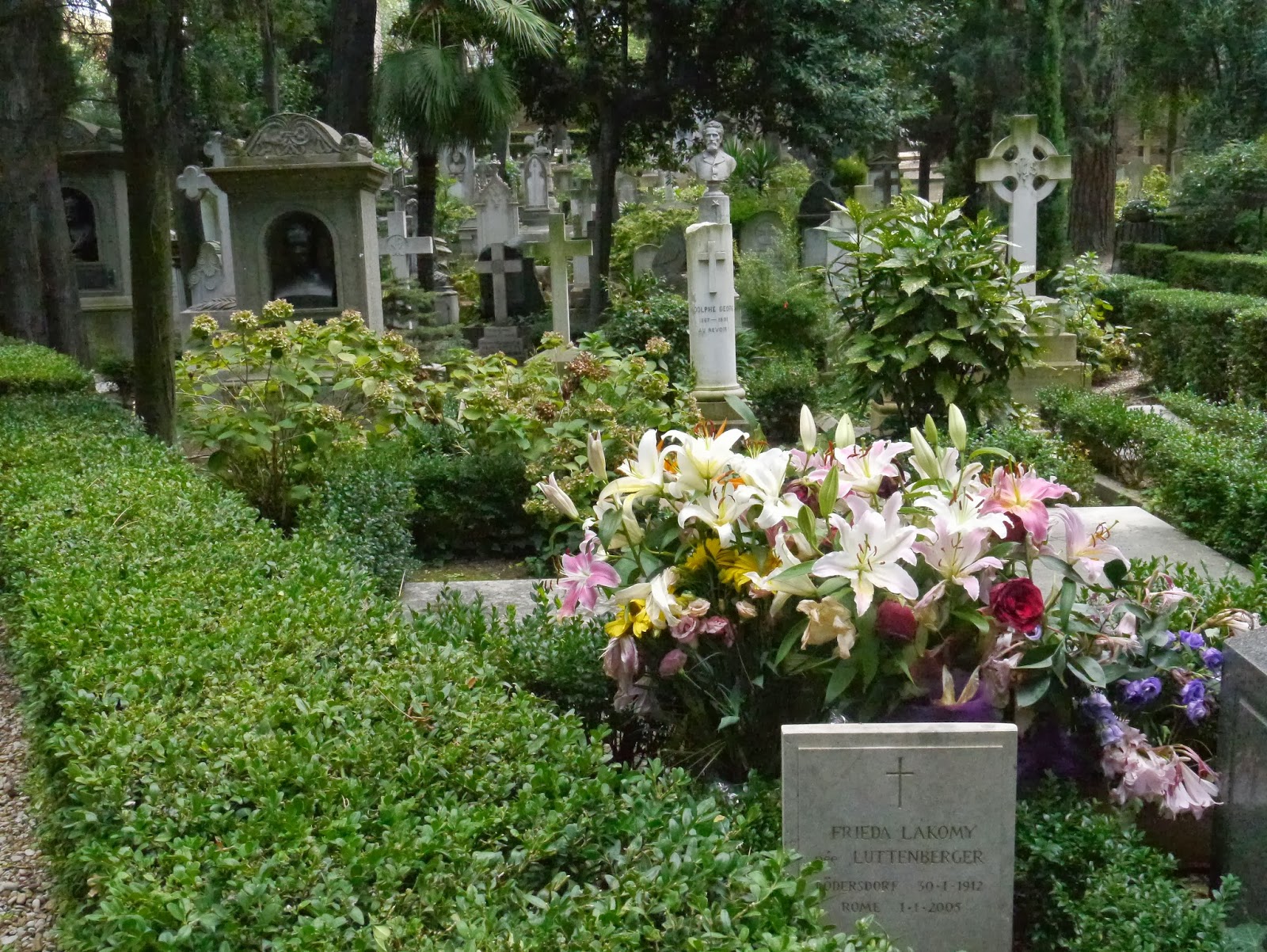 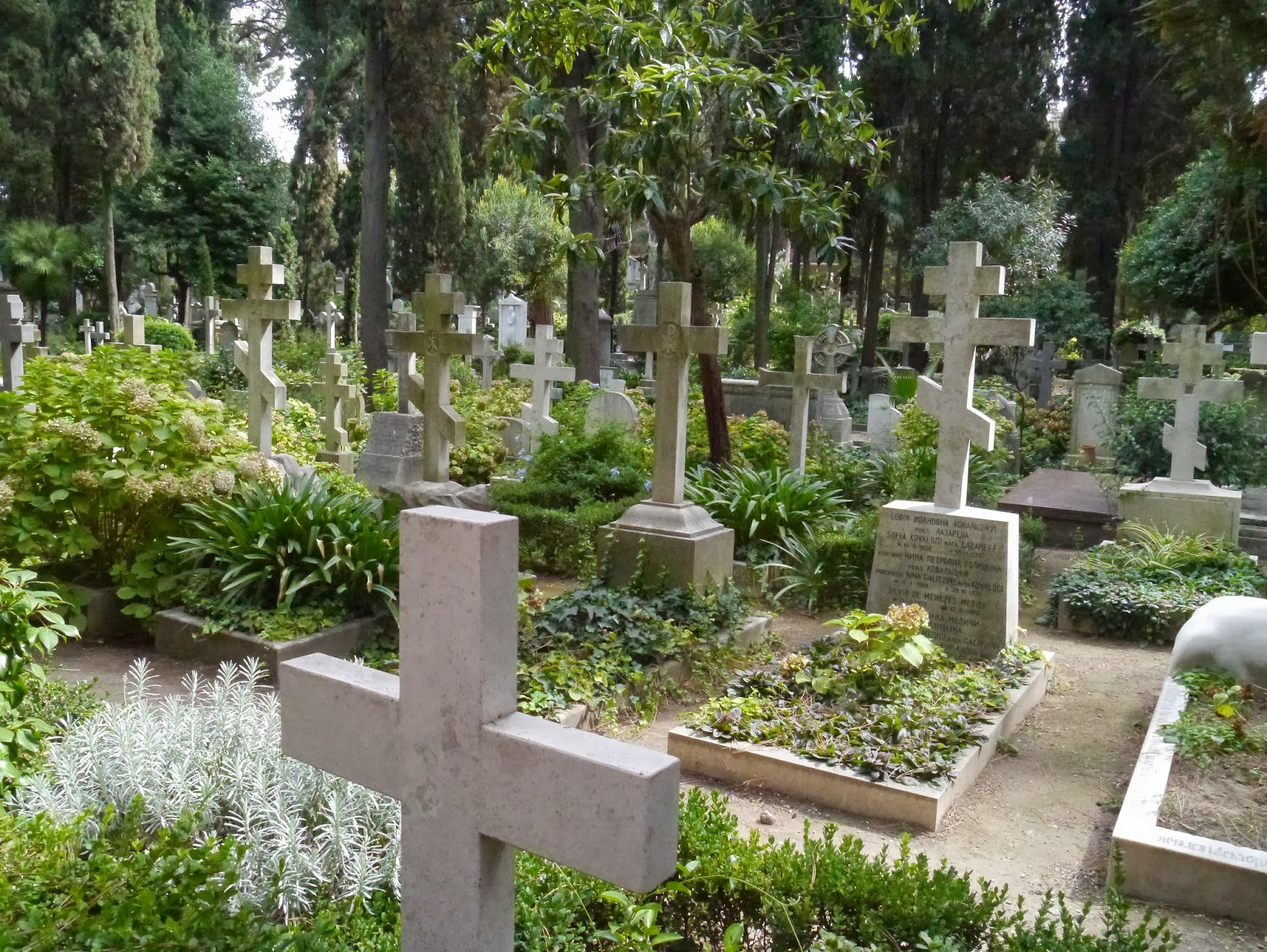 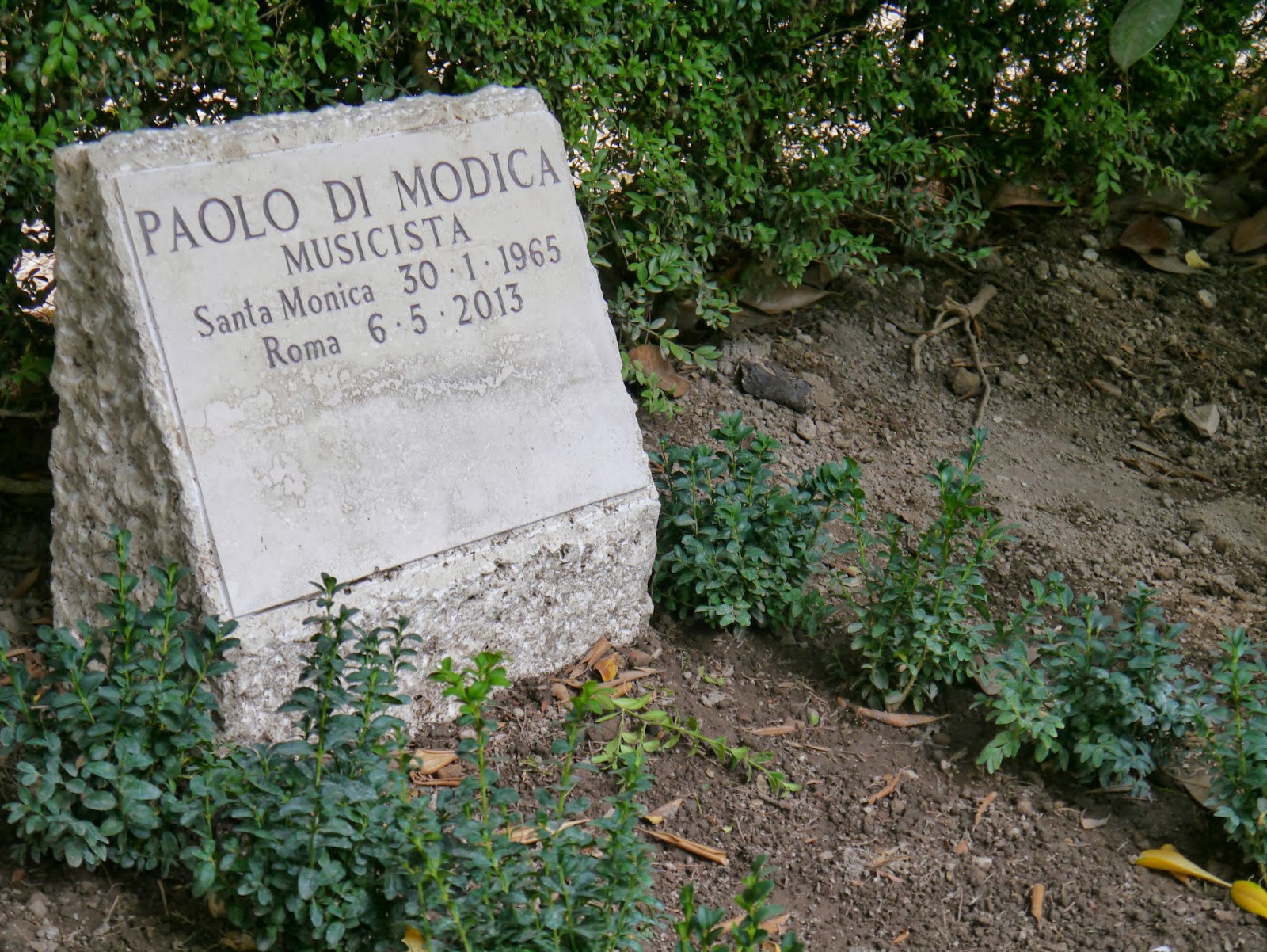 Axel Munthe (who you may recall from this post) wrote a florid description of the Cemetery (there isa commemorative plaque to Munthe), and I'll leave you with his coda:


"The twilight of dreams falls over Rome, and the afterglow of antiquity lights up the solemn ruins. Like the bas-reliefs of an old sarcophagus, the summer of Italy enshrines the strangers' rest." - Munthe

Posted by Annette Freeman at 10:04 AM