Amalfi Musical. It could have been a touristic piece of rubbish, but in fact it was a a well-performed, professional and enjoyable night at the theatre - or rather, in the ancient Arsenale of Amalfi, the stone vaults that used to be ship-building yards in the time of the medieval maritime republic. So bravi to all concerned - particularly the writer, director, costume designer, and - on the night I was there - leading man of the show, Ario Avecone.

Check out the company's website here; including a video taste of the show. 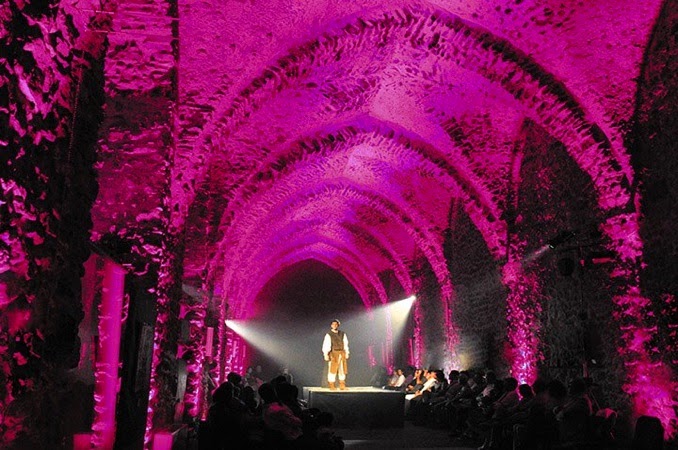 Yes, in Amalfi you can go to live theatre, and it can be good - based (possibly a bit loosely) on history, the story set in the year 839, as the republic of Amalfi struggles under the thumb of a Lombard tyrant. Interwoven is a whole lot of fiction about a love story, treachery and a dashing rescue -- it's all charmingly Italian: dramatic, full of arguments and soppy amore, fine looking clothes, handsome people, and lots of singing. What more could you ask? 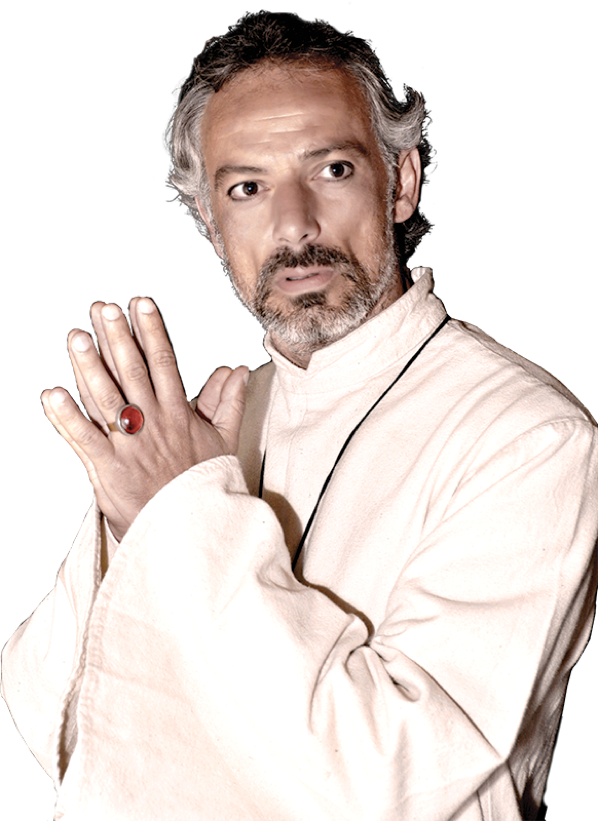 The stone vaults of the Arsenale - a museum in the day time - were filled with fake smoke, the uplights giving dramatic flair to the stone walls. The action takes place on two small stages at each end of the long gallery, and on the flagstones in between. 'A fully immersive experience!' the advertising promised -- and indeed it was, when the dastardly Lombard tyrant died realistically at my feet. 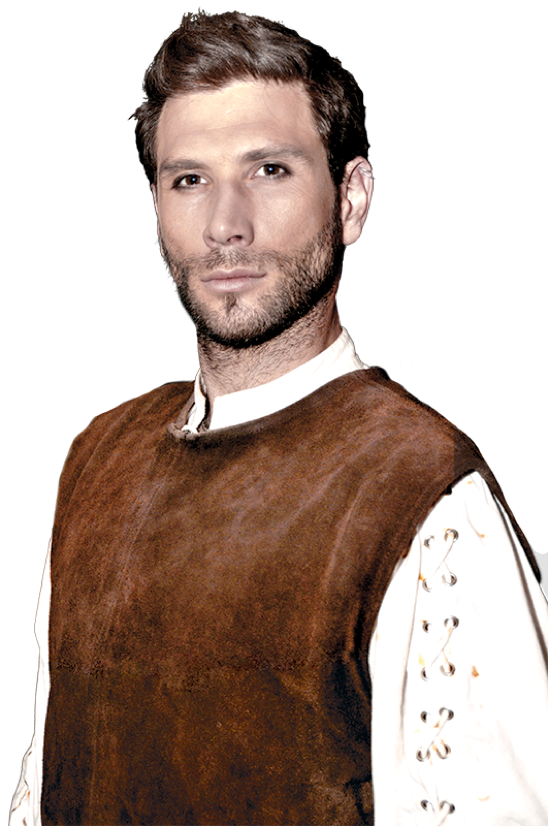 The show is spoken and sung in Italian, with surtitles on screens in a couple of languages. I must say that the music - lyrics and music original, written by Ario Avecone - is surprisingly good, though presented a little over-amplified (like most musicals). The English surtitles could use a little tidying up, but it was easy enough to follow the simple story. I was impressed by the actors/singers -- all excellent professionals; and their sumptuous historical costumes were very well done.

I've mentioned Ario Avecone, who played the lead 'Antonio' the night I attended the performance. But the whole cast are a pretty impressive lot. Check them out here. (You can also see them sometimes around town, selling tickets to the show in their costumes.) 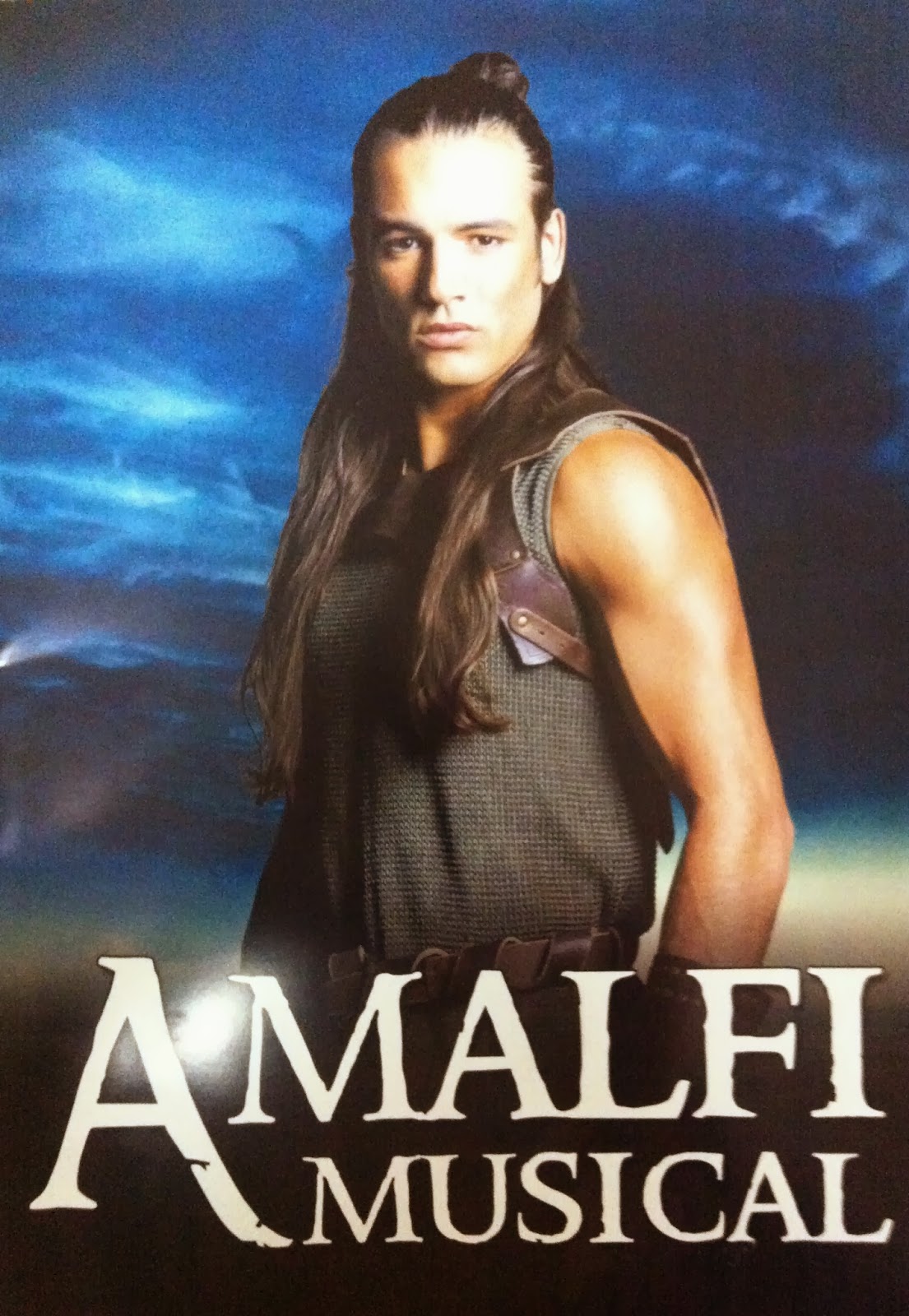 
From the union of the past with the present and the joining of history with musical theatre Amalfi® is created. A modern, folkloristic musical based on the intriguing history of Amalfi  and real events which have taken place over the centuries. Only a magical place can tell the emotional story of entanglements of love, war and passion, that the thousand- year- old rocks hide and protect from the consuming wind of time. It is the year 1000, close your eyes and breathe in the scent of the ancient rocks, whilst listening to the sound of the great masters of carpentry at work in Amalfi. You are in the dockyard of the Republic, the gateway to a journey through time that Amalfi can offer. This is where you will experience the opera Amalfi Musical Show®. Taken from real historical events, Amalfi Musical Show® gives a new  theatrical interpretation of the birth of the great Amalfi Republic. Antonio and Giovanna, their love, the wicked Sicardo’s hatred, court intrigues, all in one spectacular production of Saracen invasions and high treason. The play will alternate rapid emotions with power games and spectacular battle scenes, where the music will move you and excite you.

You can check out Ario Avecone on FaceBook here and his MySpace page here.

A good night out at the, er, ancient shipyard...

Some images from the show's website.
Posted by Annette Freeman at 10:53 AM