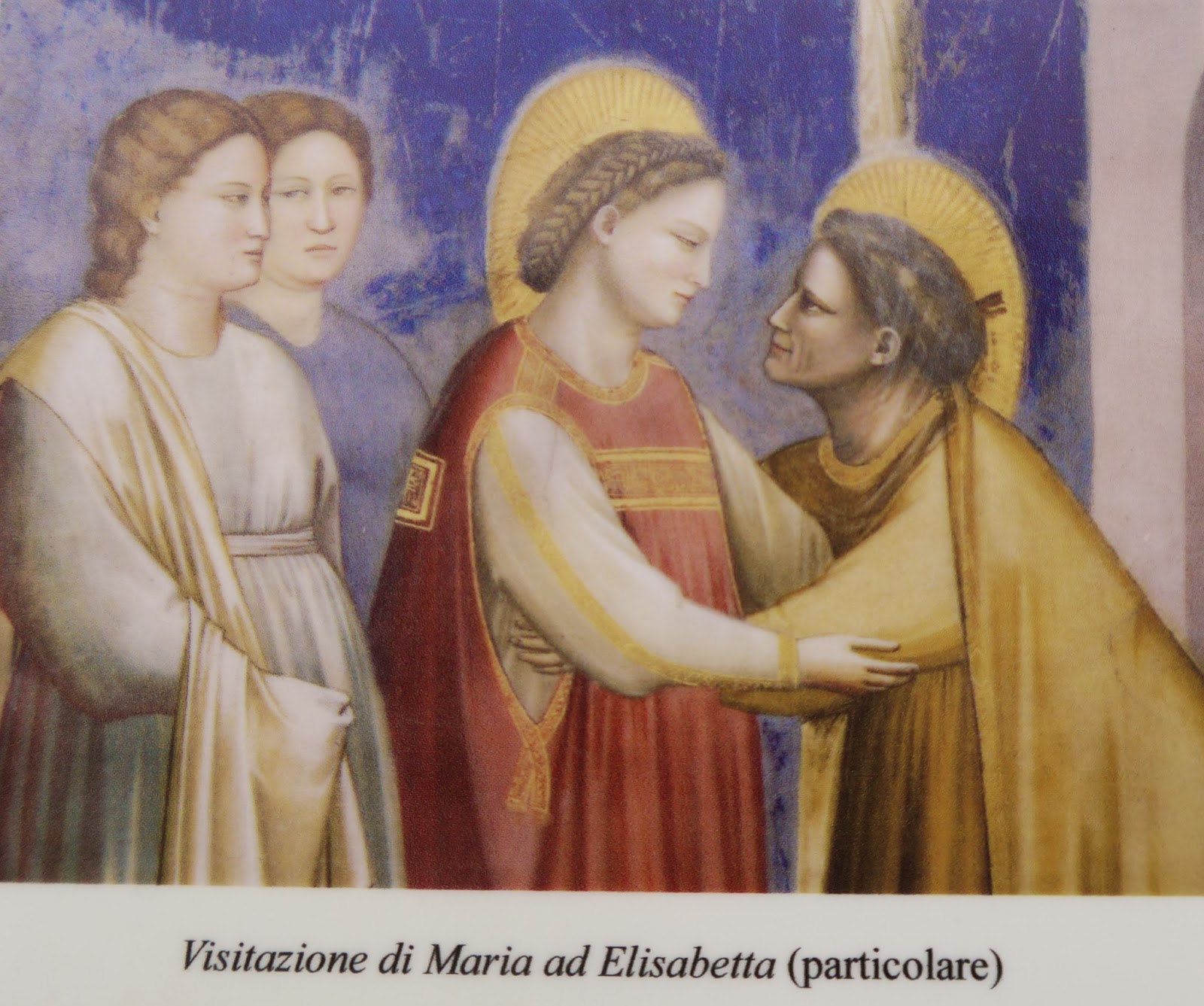 Padua has a few draw cards, but none so irresistible as the Giotto frescoes in the Scrovegni Chapel. They were painted around 1303 to 1305, and are things of extraordinary beauty. Almost as extraordinary is their sate of preservation. In a country absolutely replete with priceless treasures of art and antiquity, Italy has - so wisely - chosen to spend a lot of time, money and expertise in preserving these Giotto frescoes.

700 years is a long time for a painting on a wall to survive. Not only do the frescoes have to resist humidity, damp, light and heat, the building itself has to remain standing, avoiding earthquakes and the bombs of war (there’s a Daniel Liebskind-designed memorial to September 11 in a park across the road, containing a hunk of metal from the Twin Towers, if you needed a reminder of how not all buildings do survive). The Scrovegni Chapel was not part of a famous church or public building. It was built as a private chapel for a well-heeled Paduan nobleman, and the adjoining palace has long since gone. But it survives.

Visitors to the frescoes must book in advance, and only 25 people are allowed in at any one time. Those 25 must assemble ahead of the appointed time-slot and wait for 15 minutes (entertained by an informative video) in a climate-controlled glass room, while the air, humidity and temperature in the waiting room are adjusted down to that of the frescoed Chapel. Each time the doors are opened and the groups go in, the Chapel is given a short breathing space to regroup before the next gentle onslaught. In this way, it’s hoped that no more of Giotto’s very ancient and beautiful lapis lazuli blue will fall from his Madonnas’ cloaks. You know something’s very fragile when your very breathing could destroy it.

Giotto was a peasant’s son born around 1267, and studied under Cimabue. He helped the master in the monumental decorative work on the Basilica of St Francis at Assisi, and eventually outshone his teacher. His work was, and is, considered groundbreaking for its time - he aimed for natural, narrative representations of events and broke free of lots of Byzantine conventions. His figures have volume and occupy space; he arranges them in perspective landscapes, and depicts them from all angles, even from behind. Dante was writing his ‘Divine Comedy’ at the time that Giotto was painting the Chapel, and he mentions the painter in his ‘Purgatory’:

“In painting Cimabue thought that he / Should hold the field, now Giotto has the cry, / So that the other’s fame is growing dim.” 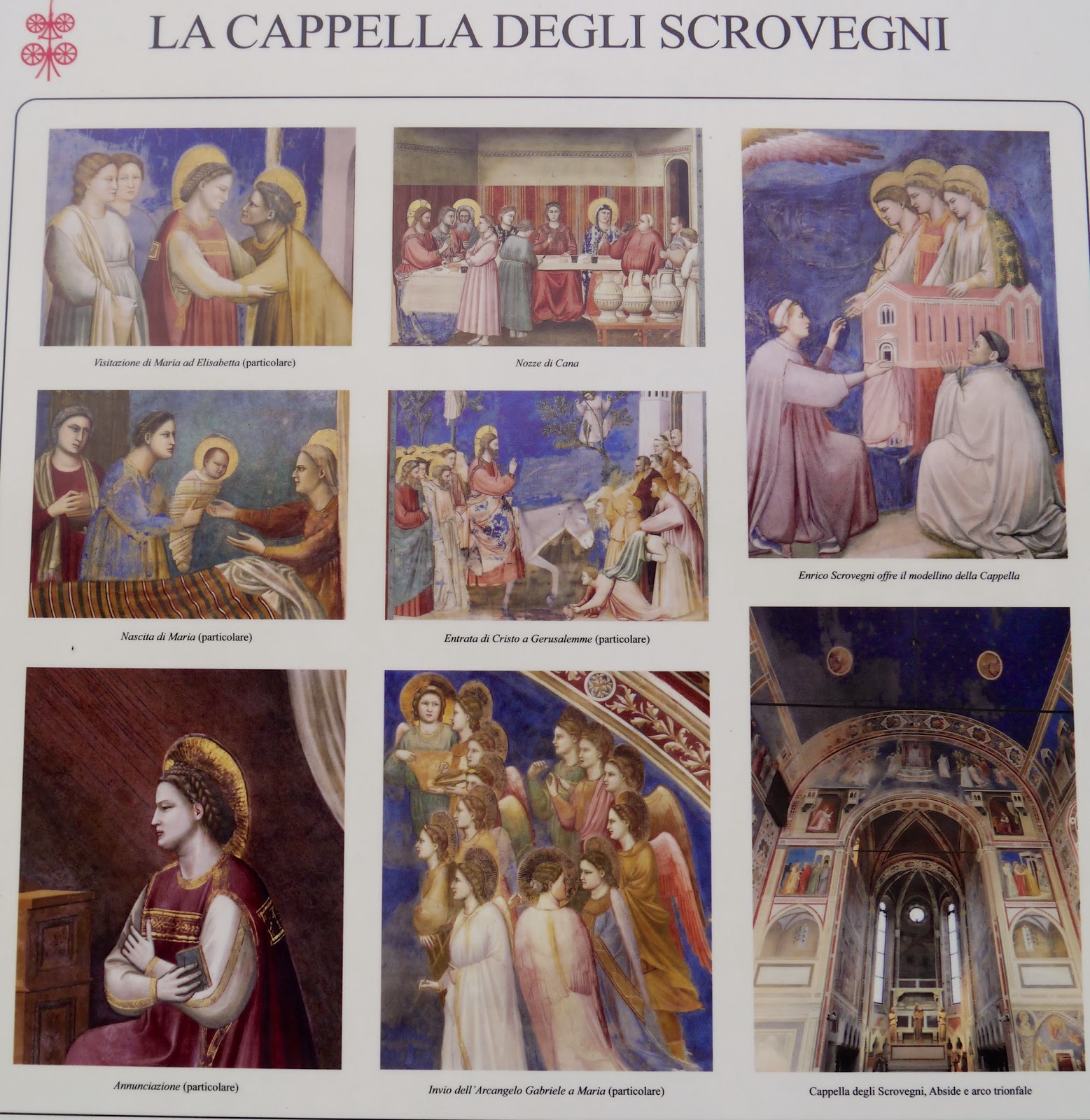 A little context for the pictures really helps. Outside the Scrovegni Chapel is an open space ringed by the crumbling walls of a Roman ampitheatre. The space was used in the 13th and 14th centuries for public plays and entertainments. These would often be drawn from the Gospels and other religious stories, teaching an illiterate populace the stories that the church (and state) wanted them to learn.

Have you heard of the pseudo-Gospels? Sometimes they’re called the apocryphal Gospels. They’re basically legends, and were later transcribed by a certain Dominican bishop named Jacobus de Varagine into a literary work called 'The Golden Legend' ("a late medieval bestseller", according to Wiki). These are stories that don’t appear in the published version, so to speak - the Canonical Gospels - but they fill in the back story to the Biblical events. They include a whole history of the Virgin Mary’s parents, Saints Joachim and Anna. (There was a point, later on, when the Church banned poor saints Joachim and Anna - who,it must be said, probably didn’t exist. But by popular demand they were re-instated.) 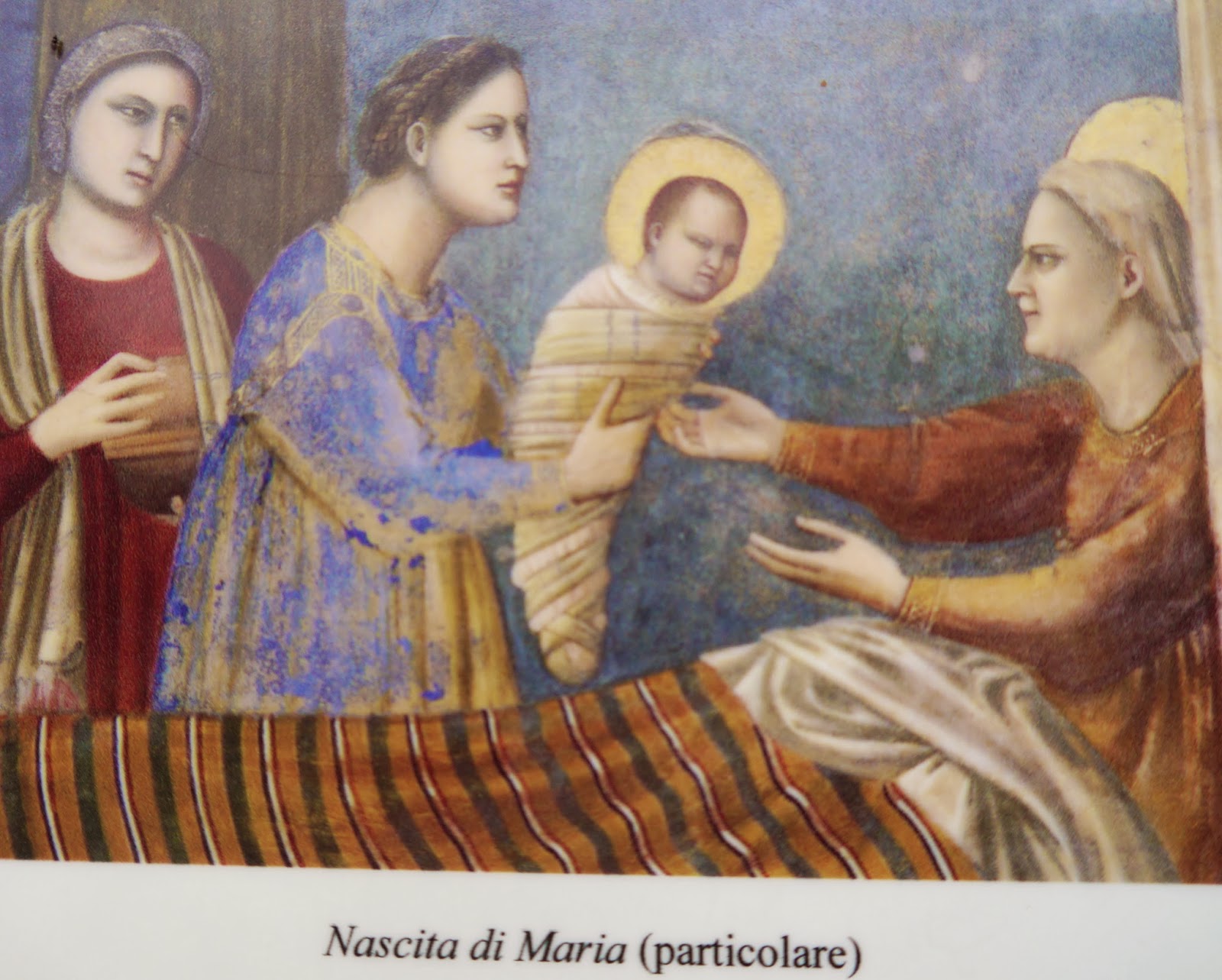 What has this to do with Giotto’s frescoes? I hear you ask. Well, Giotto reflects the stories that were repeated and acted out in the public square outside the Chapel, with the upper band of six frescoes on the right hand wall telling the stories of Joachim and Anna. On the upper band of the left hand wall, he provides six scenes, mostly apocryphal, from the life of Mary.

Below these, in the middle band, are stories from the life of Christ, and now we’re firmly rooted in the Canonical Gospels: the Wedding at Cana, the Raising of Lazarus and other such favourites. 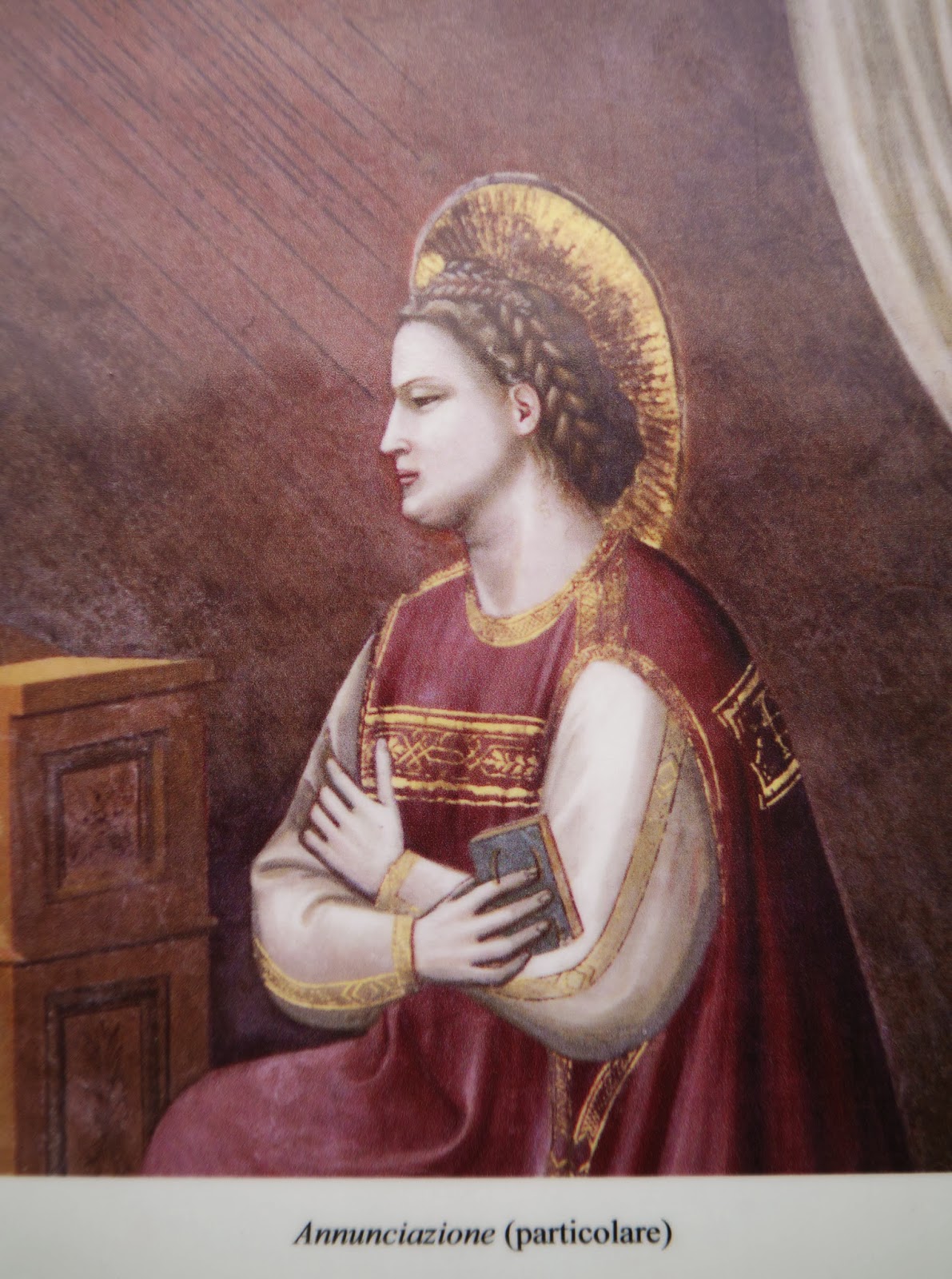 On the lower band we come to the Passion, and I quote art historian Stefano Zuffi:

“ the scenes devoted to the Passion...take on an increasingly tragic tone. One can feel the emotional build-up, indeed it is almost palpable, as Giotto competes directly with the frescoes in Assisi painted by his teacher Cimabue.”

But that’s not all. The Chapel is also painted with a variety of trompe d’oeil architectural effects, and between the story panels there are a series of painted allegorical figures of the Vices and Virtues, leading us to the entry wall, which is covered with a huge ‘Last Judgement’. This features a figure - said to be the father of the Scrovegni who built the chapel - offering a model of it to the angels. There is a story that this father was a dastardly usurer, and the Chapel was meant as an offering to move him up from Hell to Heaven. The scenes of Hell in Giotto’s ‘Last Judgement’ are said to contain more than the usual number of usurers. The ghastly ape-like devil is present.

And above all this, the vault of the Chapel is painted as a blue sky with stars. Divine? I think so.

The frescoes in the Scrovegni Chapel are considered Giotto’s greatest masterwork, and a watershed in European art. I’ve known myself moved to tears by opera or music, and occasionally by a piece of writing, but Giotto’s frescoes are the only works of visual art that have ever done that to me. The photos here (snapped from the sign outside - no photos allowed in the delicate Chapel) cannot do them justice, but perhaps they can give a small taste. Go sit in the climate-controlled room and wait your turn to see them. 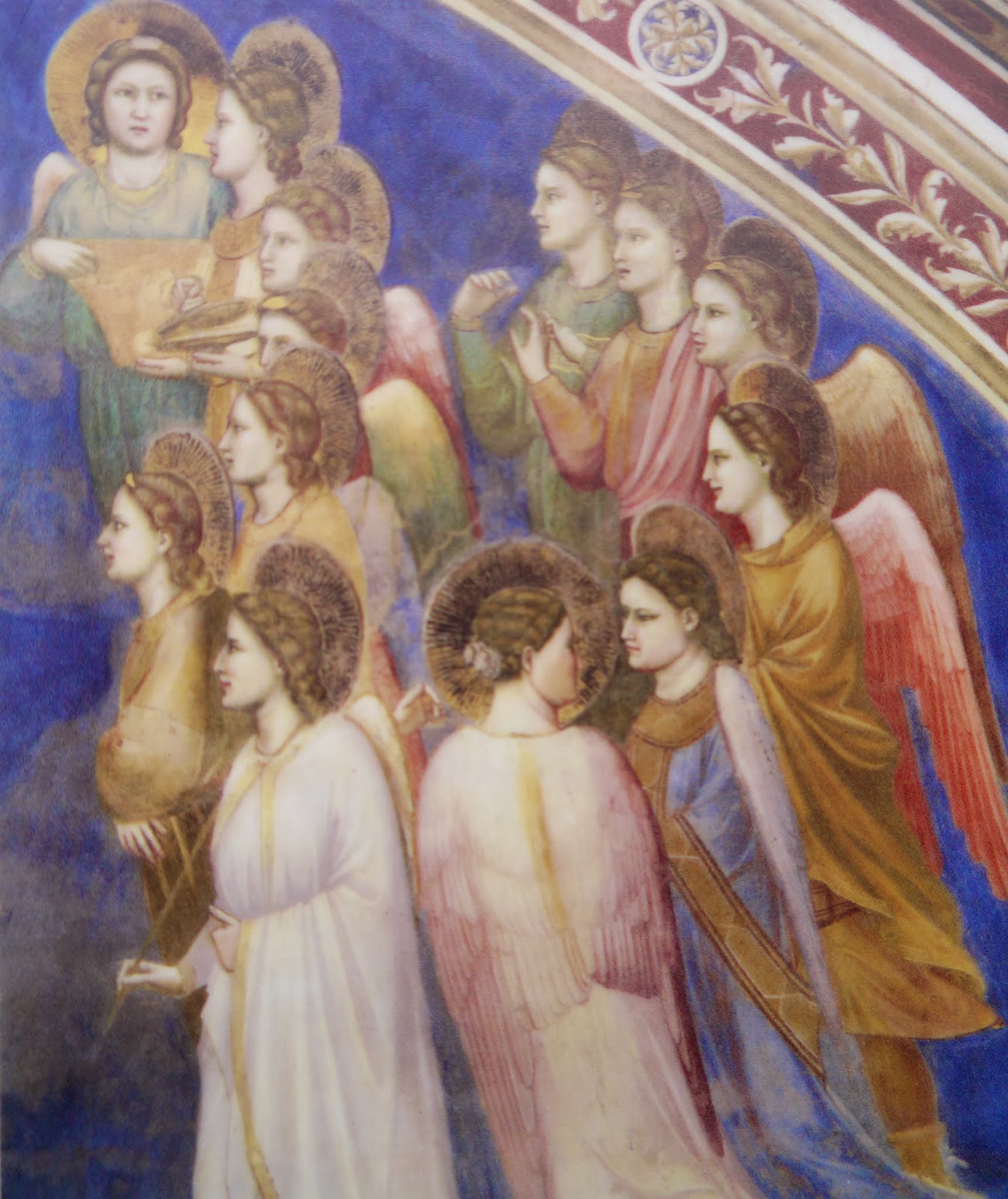 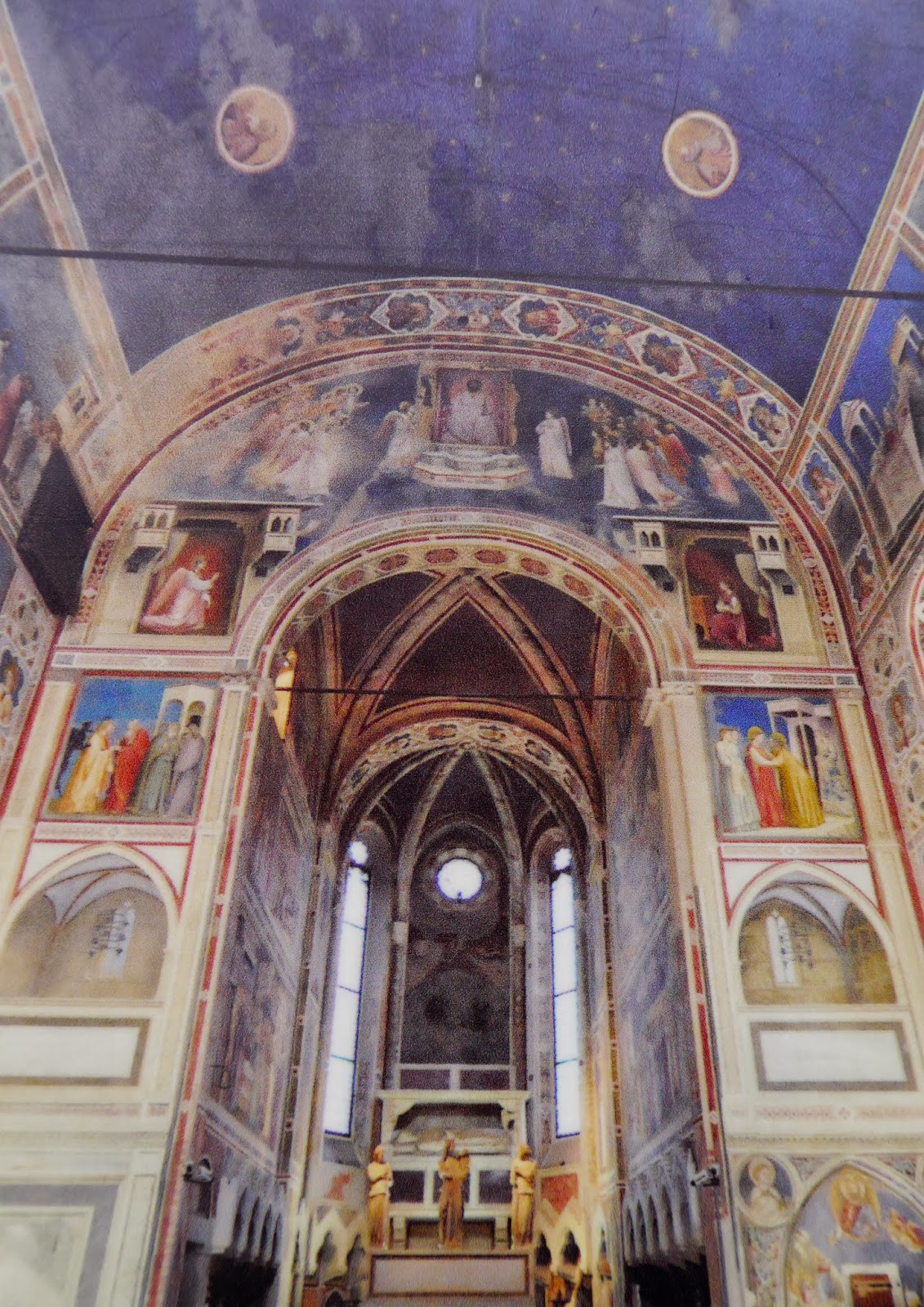 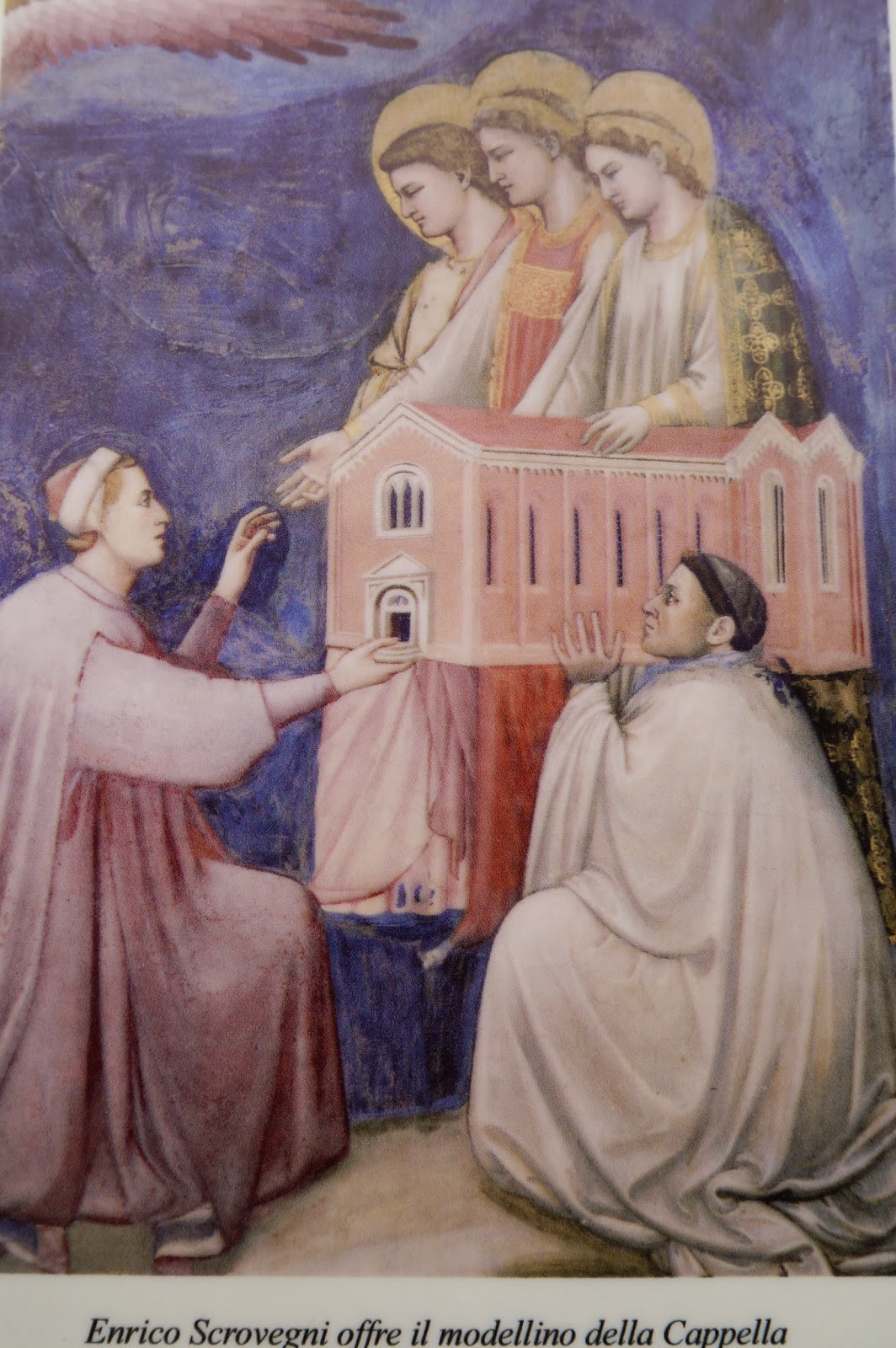 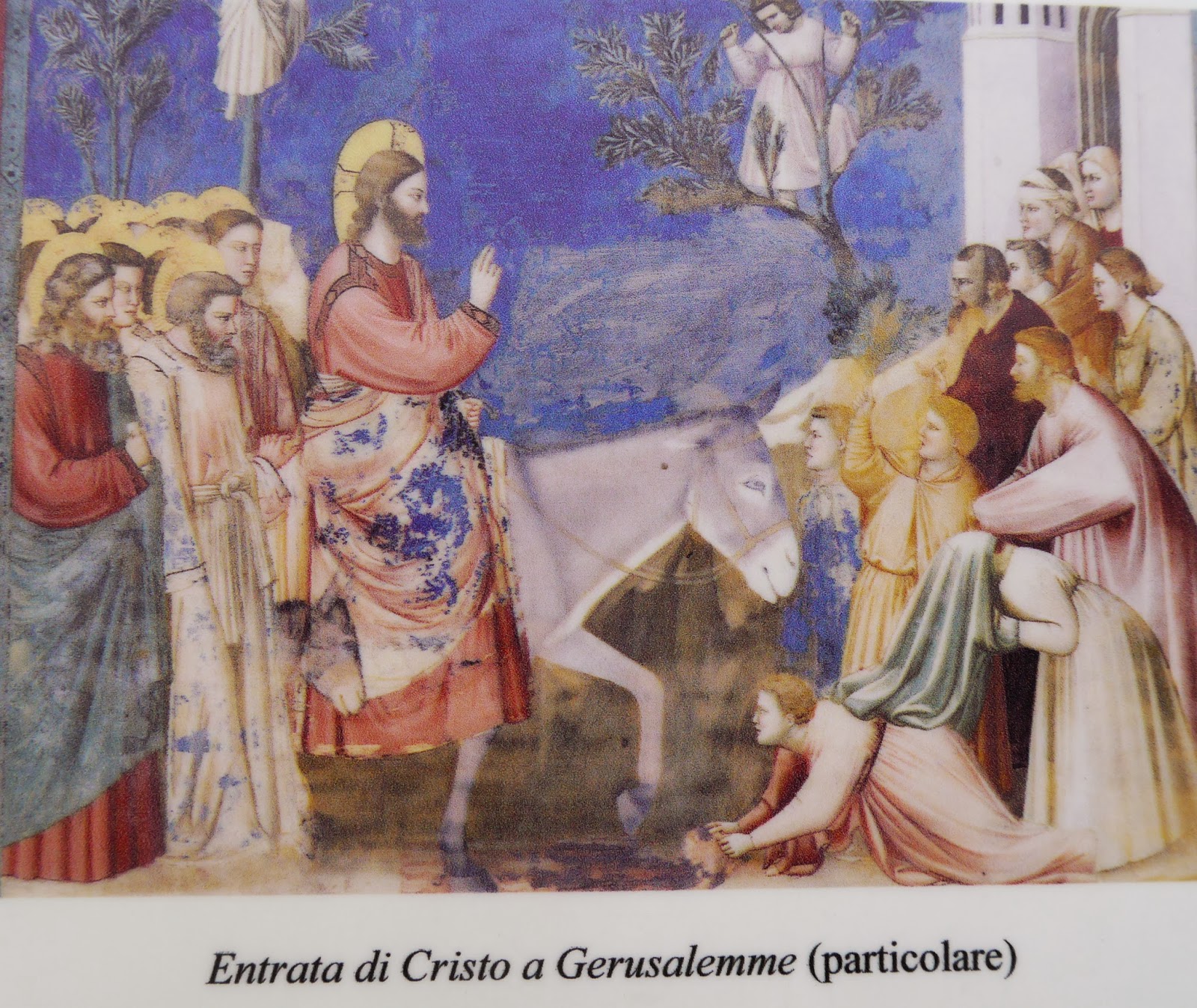 Posted by Annette Freeman at 5:26 PM