Abu Dhabi: “Where petrol is cheap but water is expensive” - my Indian guide.

Driving from the airport into the gleaming new city of Abu Dhabi, you could be forgiven a little surprise. This place seems to have discovered the Answer to The Ultimate Question of Life, the Universe, and Everything, which as fans of ‘The Hitchhiker’s Guide to the Galaxy’ will know, is 42. Signs along the Corniche highway, brightly lit in the evening, proudly proclaim: ’42’. It turns out that this is not about metaphysics, however, but rather the 42nd anniversary of the establishment of the United Arab Emirates. And of course, the 42nd anniversary is a very important one...er, isn’t it? (Like many things to my Western eyes here, something might have become a little lost in translation.) 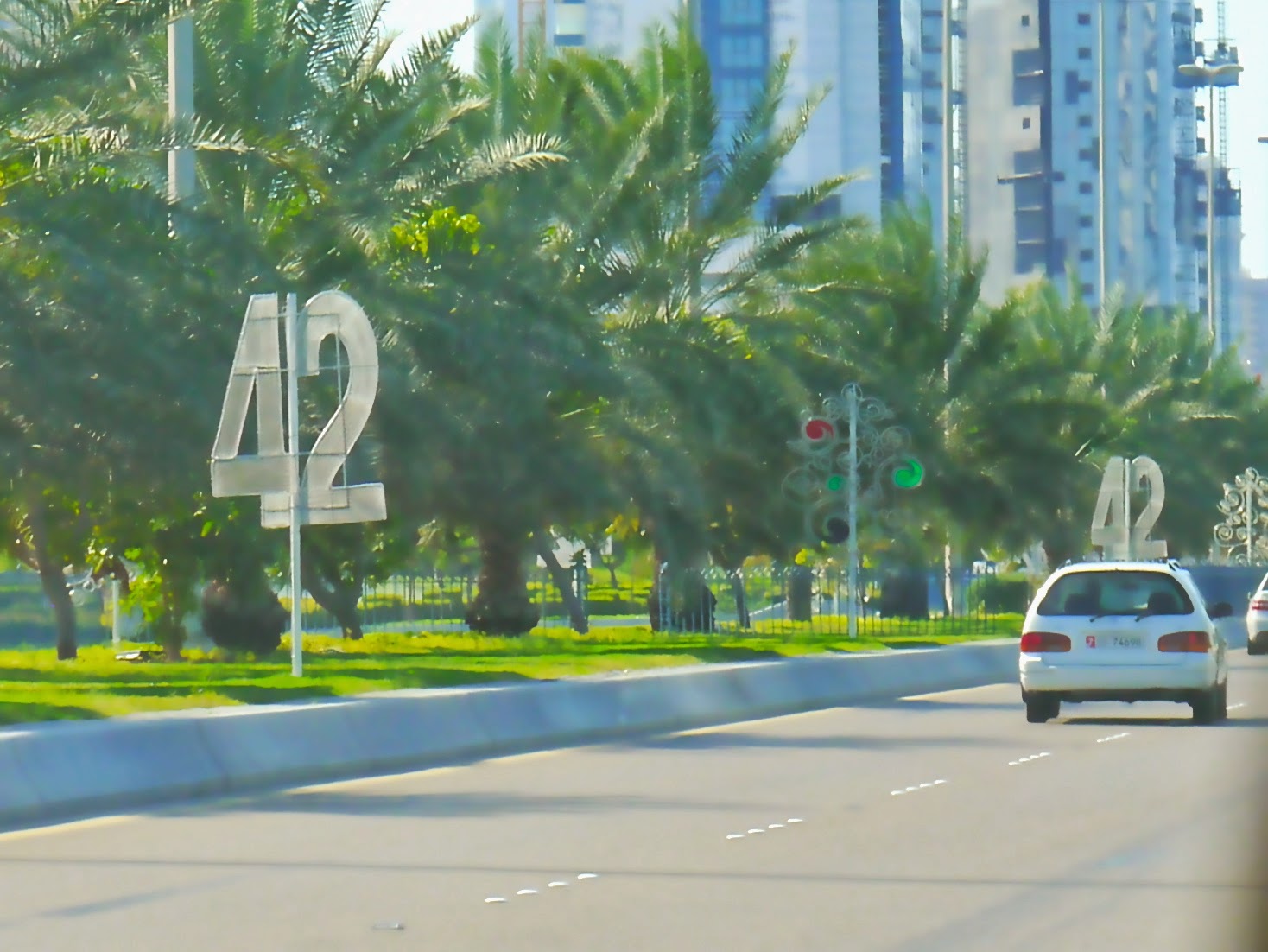 You can lookup the history of the Emirates on Wiki which will tell you the important details:


The United Arab Emirates i(Arabic: دولة الإمارات العربية المتحدة Dawlat al-ʾImārāt al-ʿArabiyyah al-Muttaḥidah), sometimes simply called the Emirates or the UAE, is an Arab country located in the southeast end of the Arabian Peninsula on the Persian Gulf, bordering Oman to the east and Saudi Arabia to the south, as well as sharing sea borders with Qatar and Iran.
The UAE is a federation of seven emirates (equivalent to principalities). Each emirate is governed by an hereditary emir who jointly form the Federal Supreme Council which is the highest legislative and executive body in the country. One of the emirs is selected as the President of the United Arab Emirates. The constituent emirates are Abu Dhabi, Ajman, Dubai, Fujairah,Ras al-Khaimah, Sharjah, and Umm al-Quwain. The capital is Abu Dhabi, which is one of the two centers of commercial and cultural activities, together with Dubai. Islam is the official religion of the UAE, and Arabic is the official language. 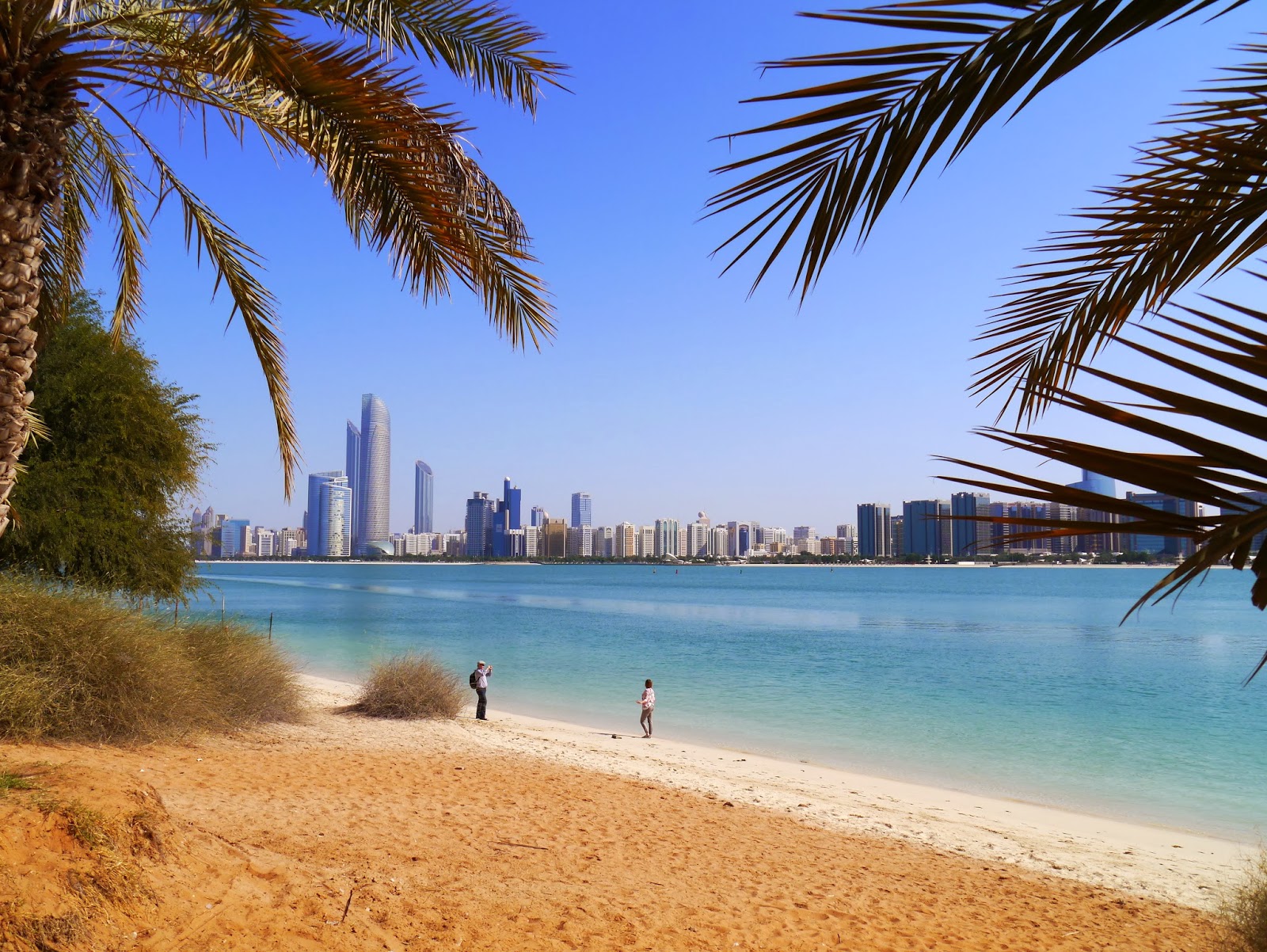 The Royal Family plays a prominent role in Abu Dhabi, the capital of the UAE, from its patriarch Zayed bin Sultan Al Nahyan, to his son the current ruler Khalifa bin Zayed Al Nahyan and the numerous family members. The ruler’s half-brother is a kind of second-in-command, known as the Crown Prince (or “an extra”, as my guide put it). The patriarch is said to have had 19 sons (and an indeterminate number of daughters) from four wives. Knowing this helps explain why the city is stuffed with royal palaces (and new ones are being built everywhere), public buildings have large ‘VIP’ entrances, and there is a separate airport terminal for the Royal Family. It might also explain why said patriarch looks so fierce on the posters of him around town. 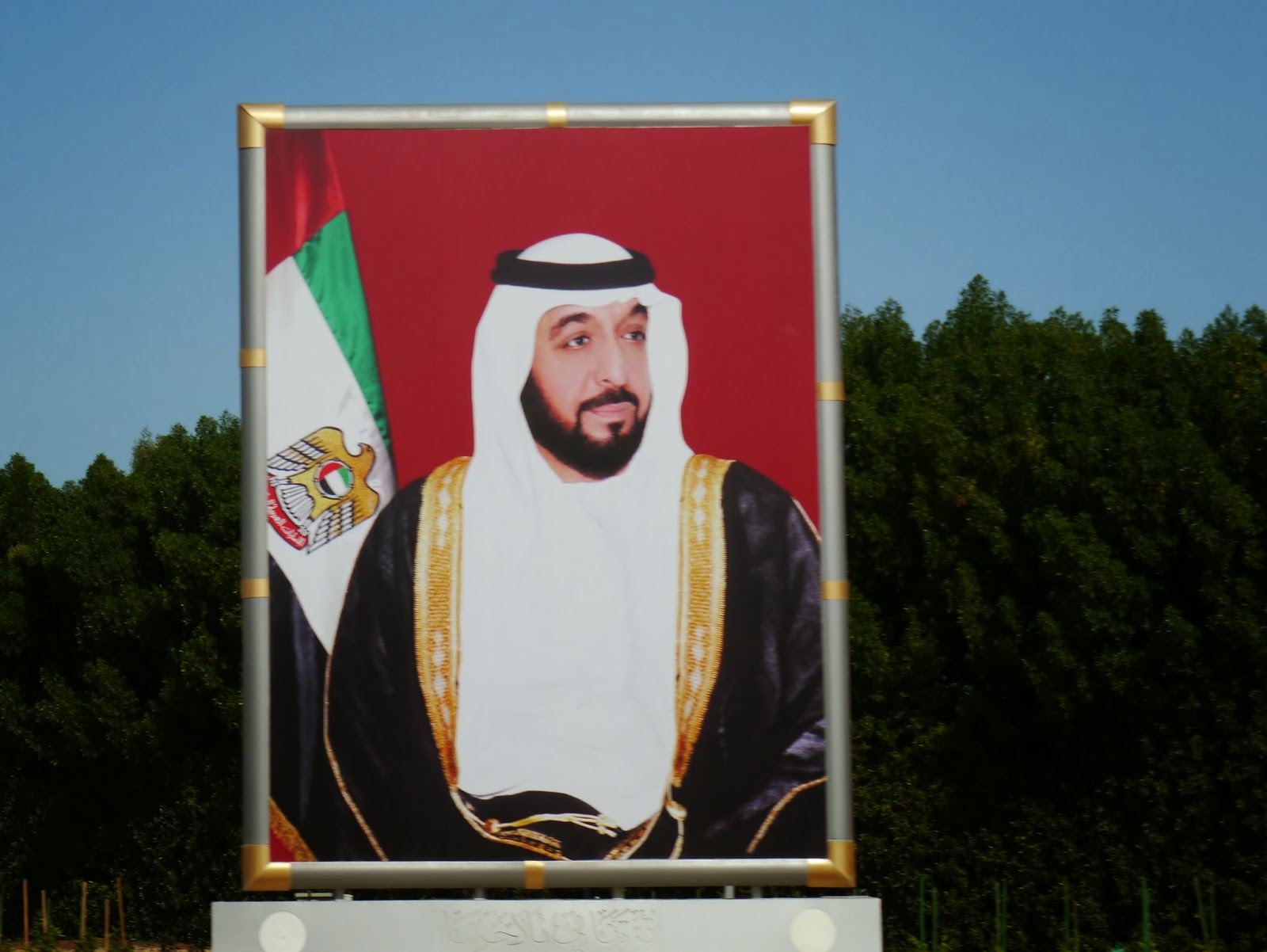 Abu Dhabi seems to run on the untiring work of thousands of immigrants. Though the Arab men in their cool, handsome white dishdash are at the immigration desks at the airport, and wait with their briefcases for luxury cars at the hotels, the waiters, doormen, check-in clerks, cooks, guides, cleaners, security staff, manicurists, hotel managers, taxi drivers, market sellers, construction workers...all seem to be immigrants, many from the Indian subcontinent and Asia, but with a good sprinkling of other nationalities too (including Polish and Australian). Arabic may be the official language, but English is the way of communication in the hotels. 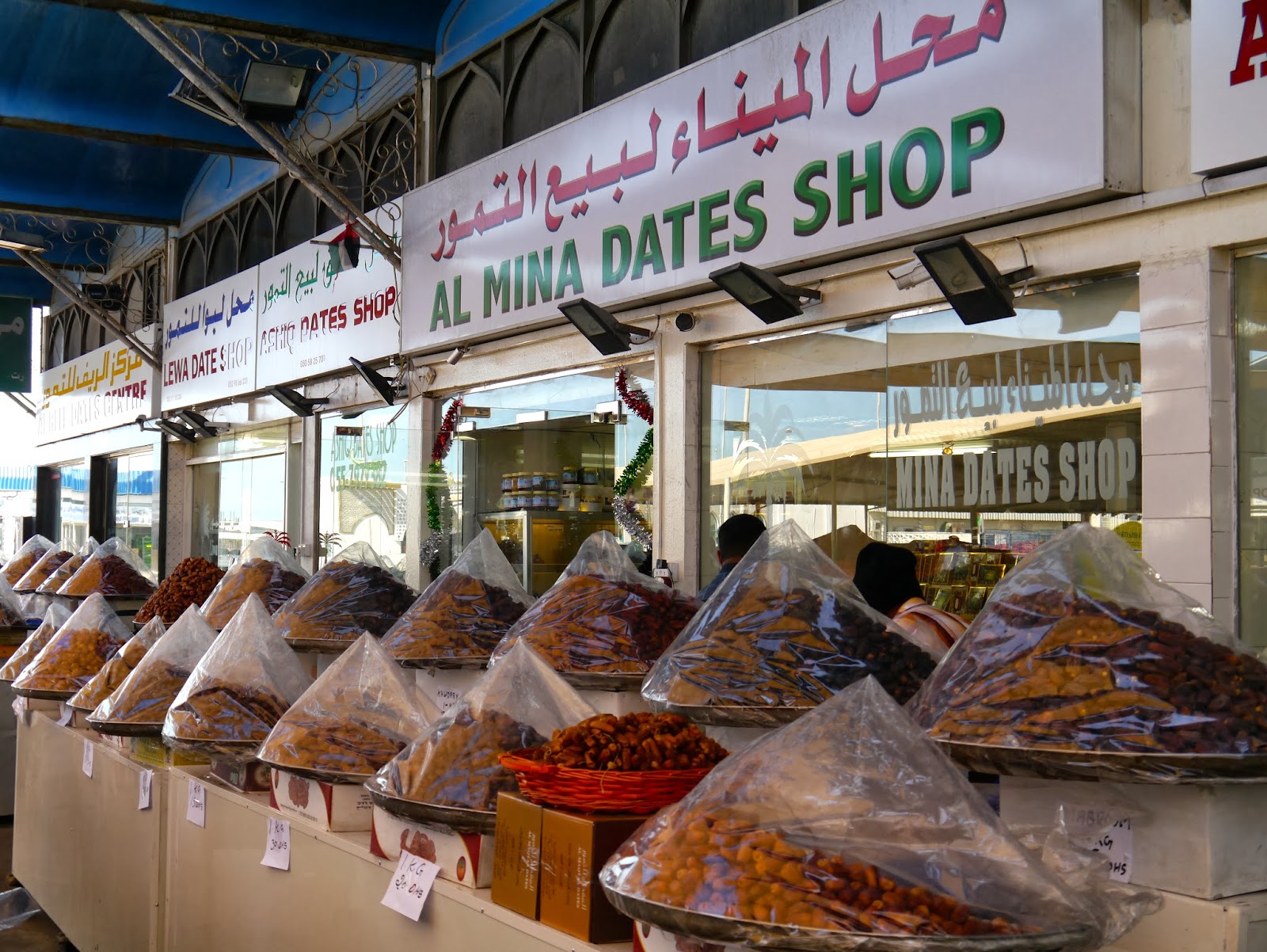 
Abu Dhabi is the second most expensive city for expatriate employees in the region, and 67th most expensive city in the world. Fortune magazine and CNN stated in 2007 that Abu Dhabi is the richest city in the world. However, many residents of Abu Dhabi are blue collared workers who get paid very little, work in relative unsafe environments and live in squalid labour camps; this contrasts with senior managers or executives who earn exorbitant annual salaries and work in plush offices. Thus, it can be understood that the wealth is not shared equally. 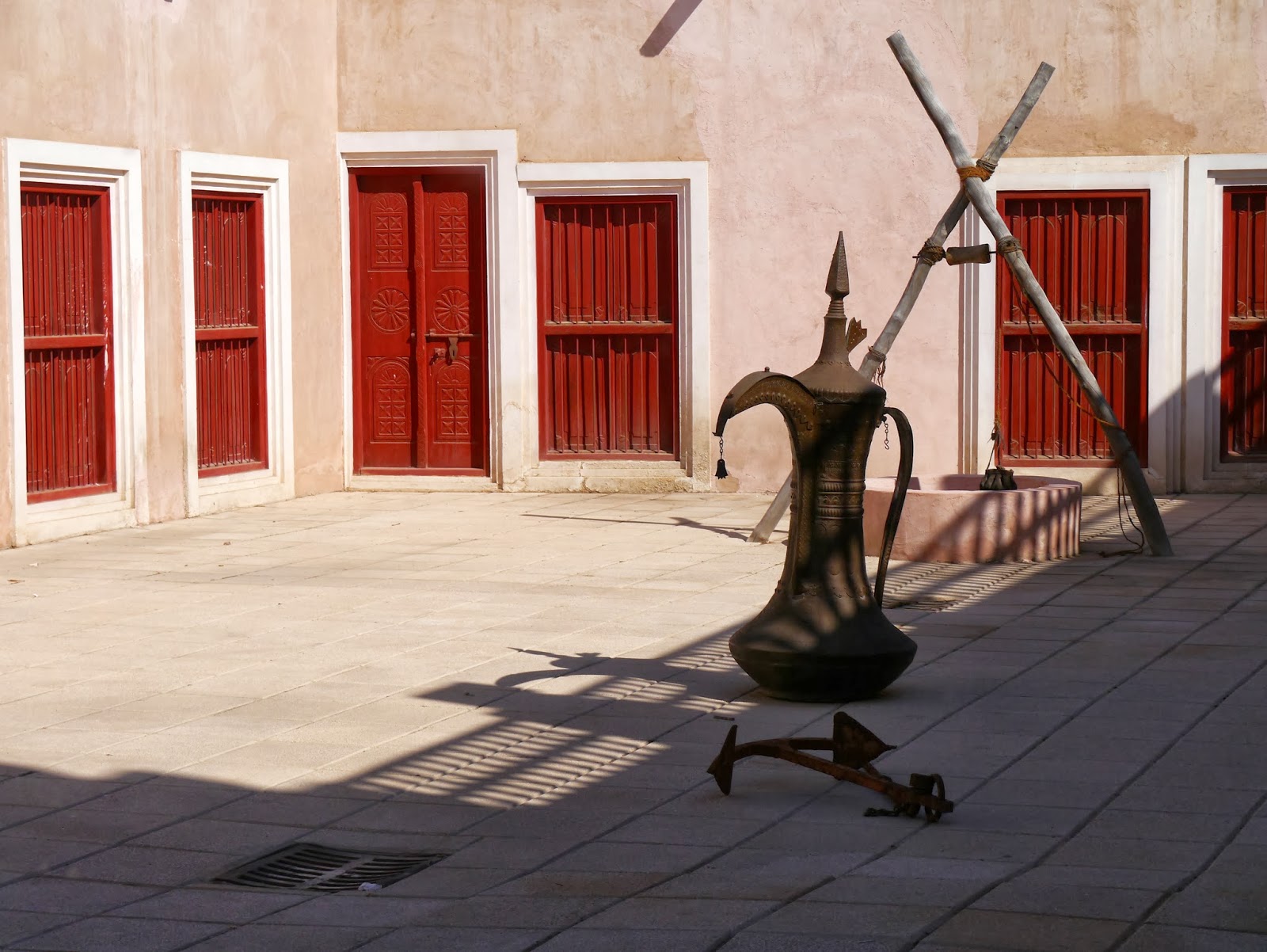 The Emirate of Abu Dhabi is the largest area of the UAE, with a land surface of about 67,340 square kilometres, which is equivalent to about 87% of the UAE’s total land area. It has a population of around 920,000, although only 30% of the emirate is inhabited, with the remaining vast expanses covered mainly by desert and arid land — constituting about 93% of the total land area.

The land is utterly barren - flat desert as far as the eye can see (from a plane, or a high-rise). The city is situated on an island, with a number of smaller islands, natural and reclaimed, surrounding the city. There is a tiny pocket of the original mangrove left - where gazelle used to roam (giving the city its name: ‘Abu Dhabi’ means ‘Father of the Gazelle’). But any other trees you see are planted, and watered. Actually, the place is not completely barren - they do grow a lot of dates. Lovely dates, actually. 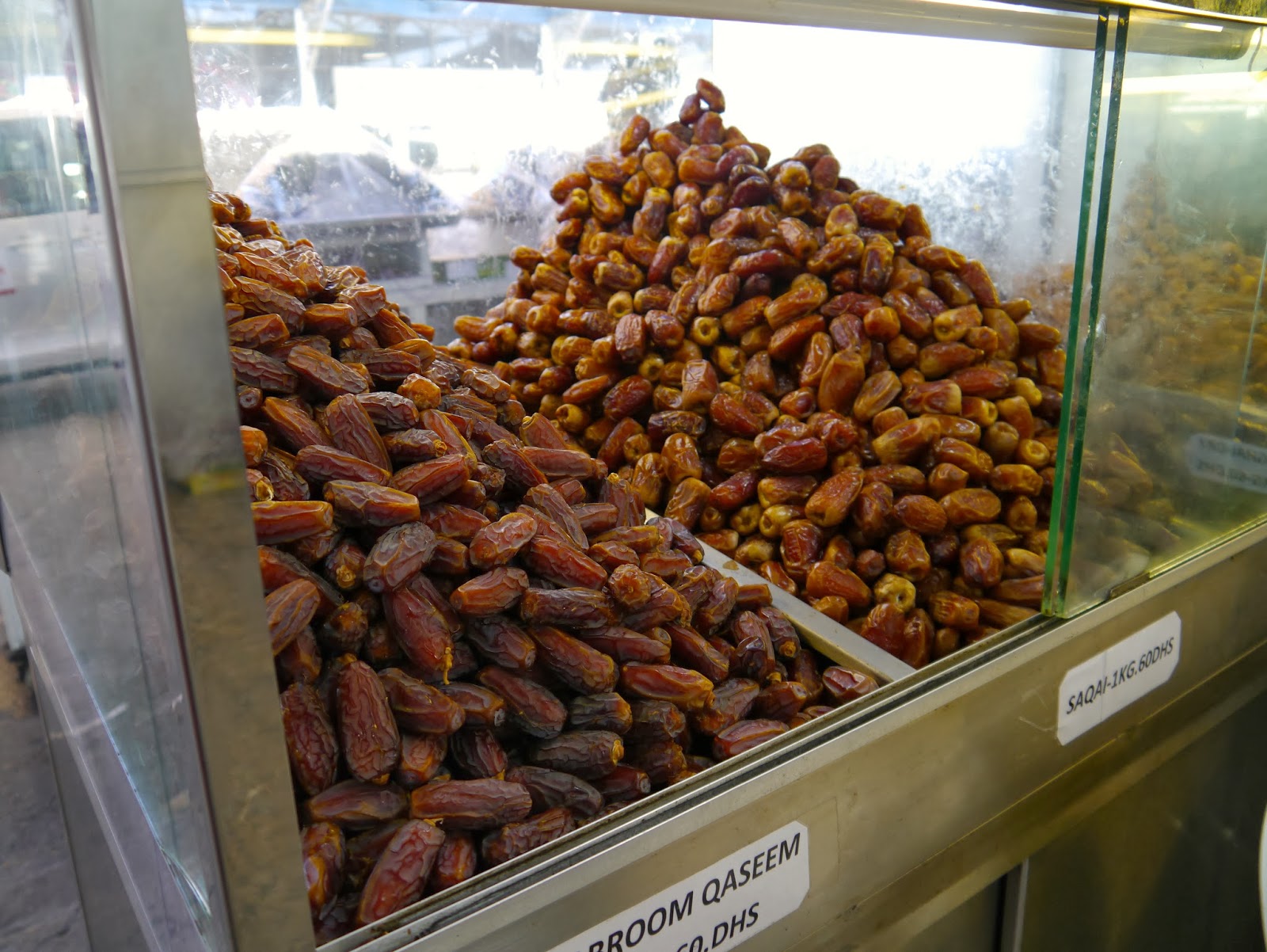 As is well-known, Abu Dhabi and the Emirates sprang from poor, backward fishing villages and desert encampments into high-tech modern cities in the space of only one generation, fueled (pun intended) by the discovery of oil. A LOT of oil. Before the oil, the area was known for pirates, British colonial meddling, and pearls. People began looking for oil as early as the 1930s, but the big strikes were made in the 1960s. And the rest is history, as they say. However, it doesn’t take much imagination to appreciate that such a dramatic transformation in such a short time cannot have been easy, either for the people, or politically. According to the adulatory posters around town, Zayed bin Sultan Al Nahyan is much revered for the steady hand with which he navigated these times.

And the weather? In December, temperatures were around the mid-20s (Celsius), the humidity high but not uncomfortable. There was a light breeze from the sea. However, in high summer the temperatures are in the high 30s on average, and can reach the 50s, with sand-storms not uncommon. Luckily, someone invented air-conditioning, without which modern Abu Dhabi probably wouldn’t exist.

Here's a photo journal of some aspects of Abu Dhabi -- much to understand and investigate. 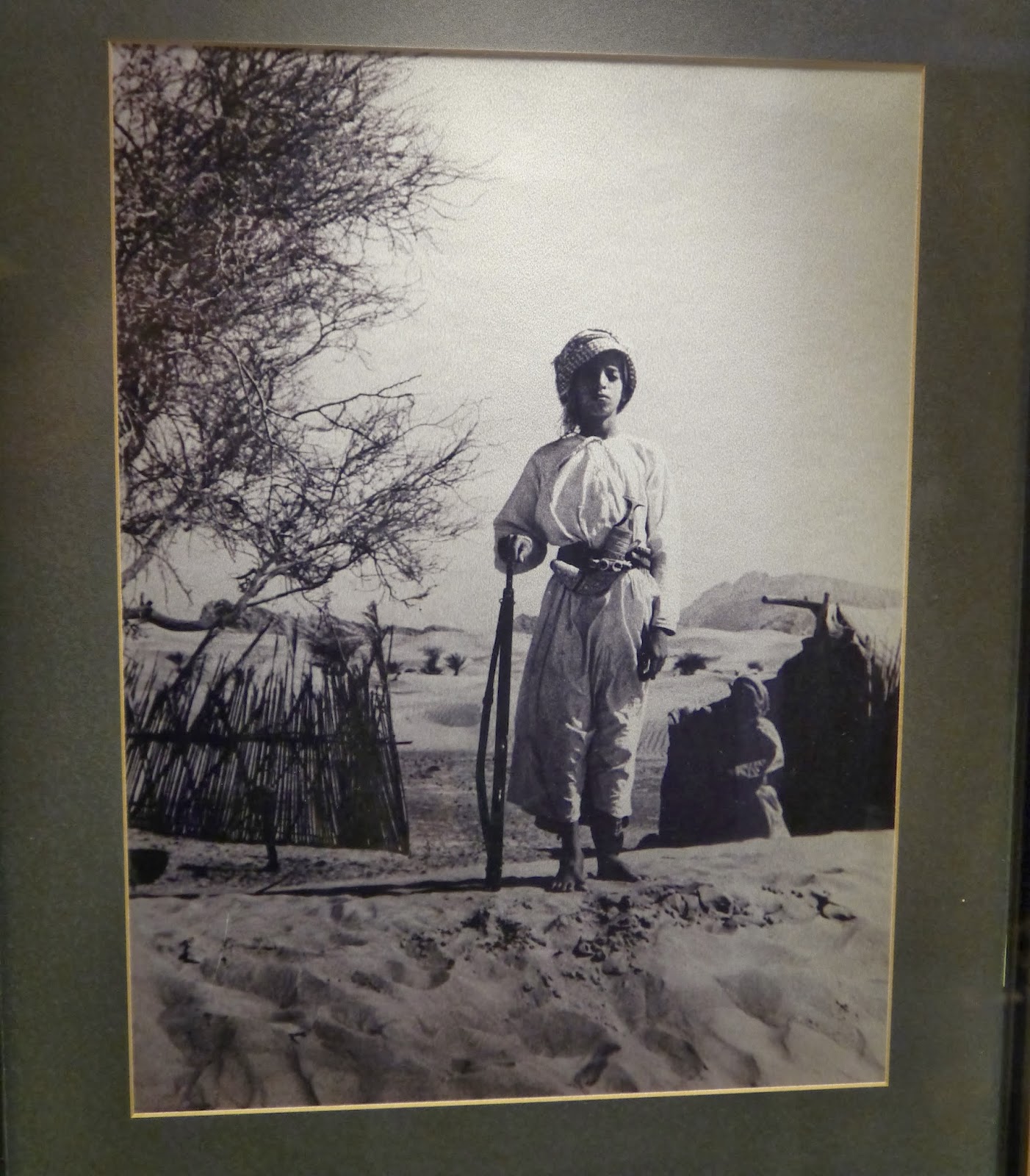 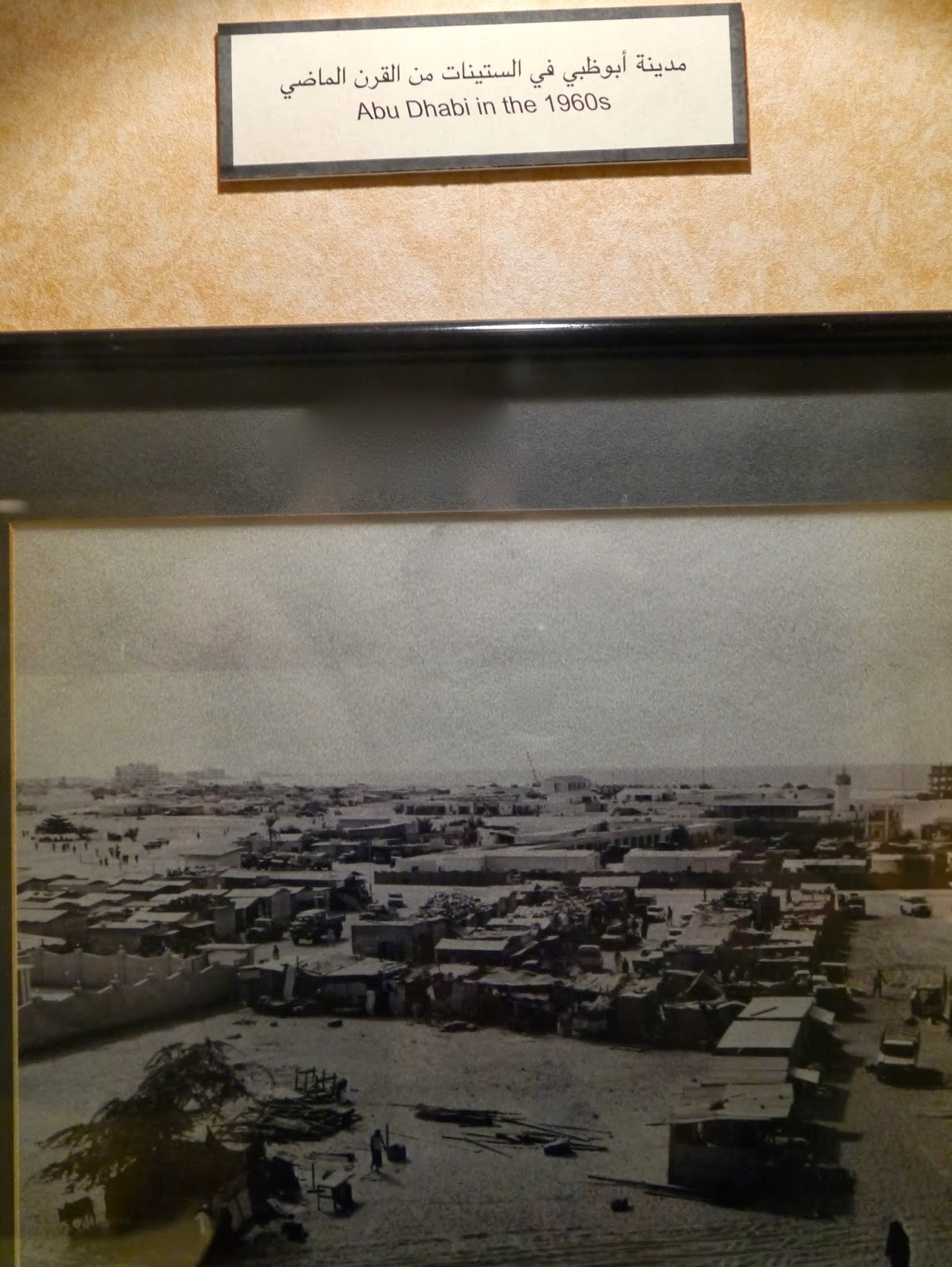 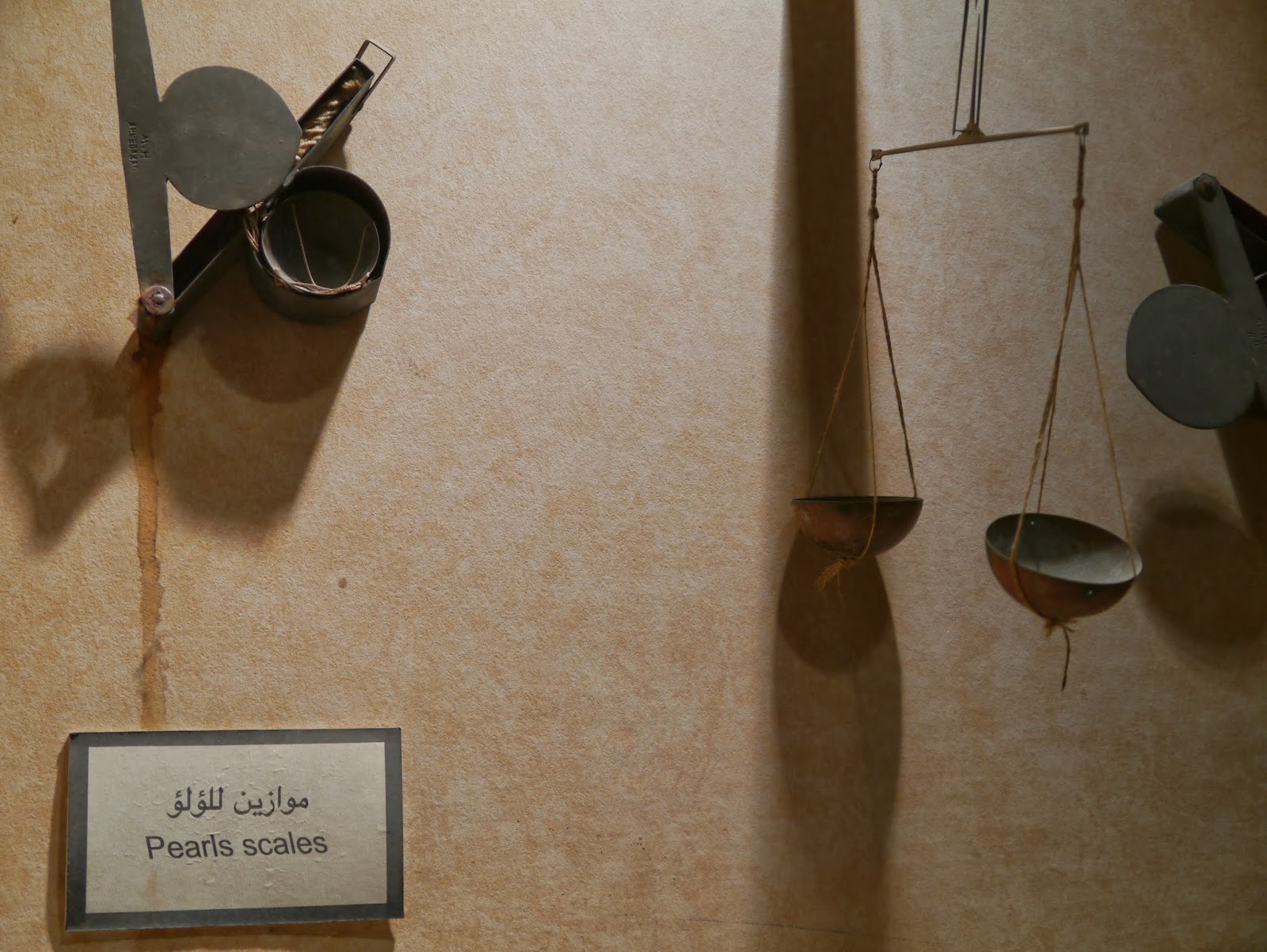 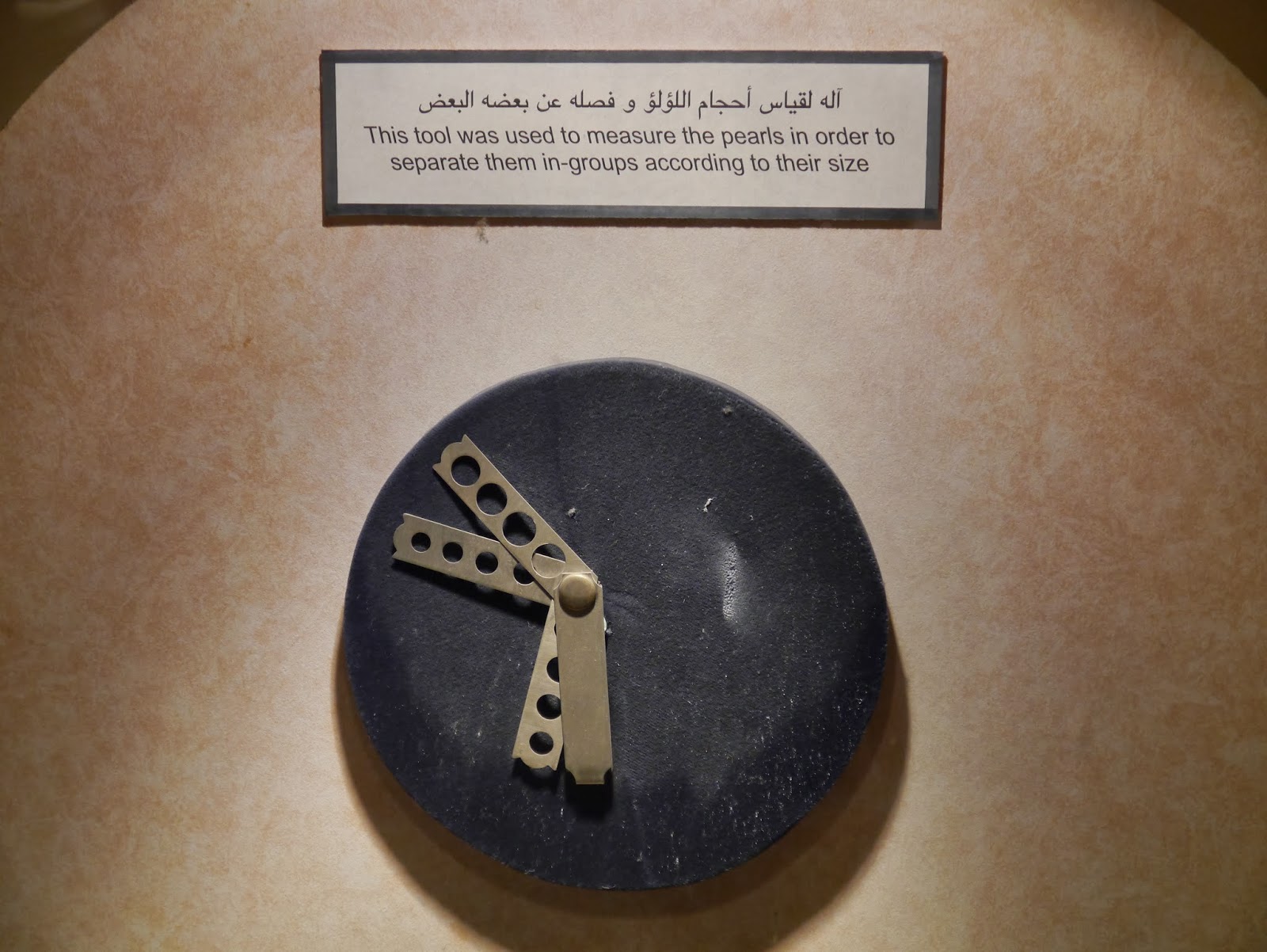 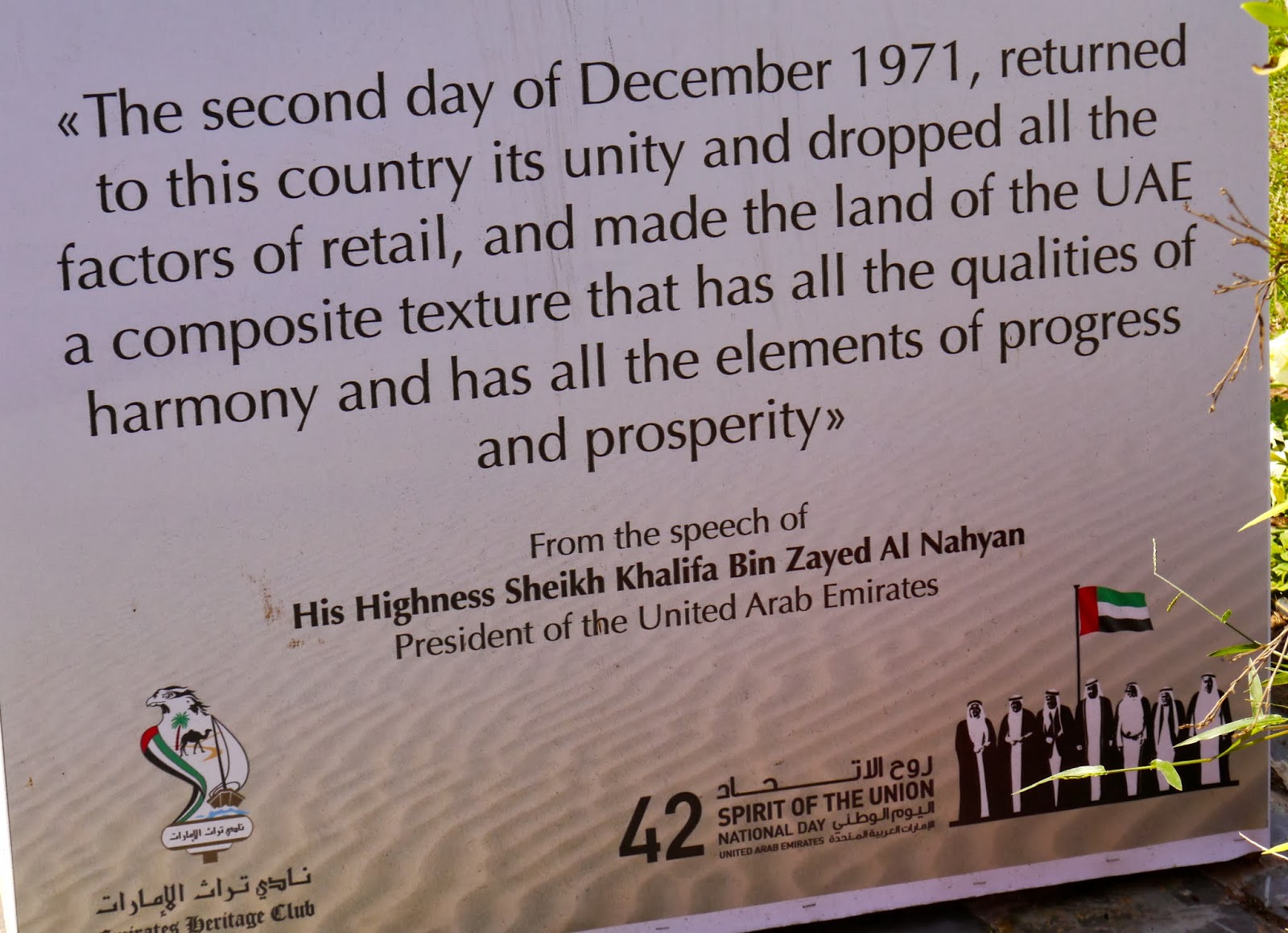 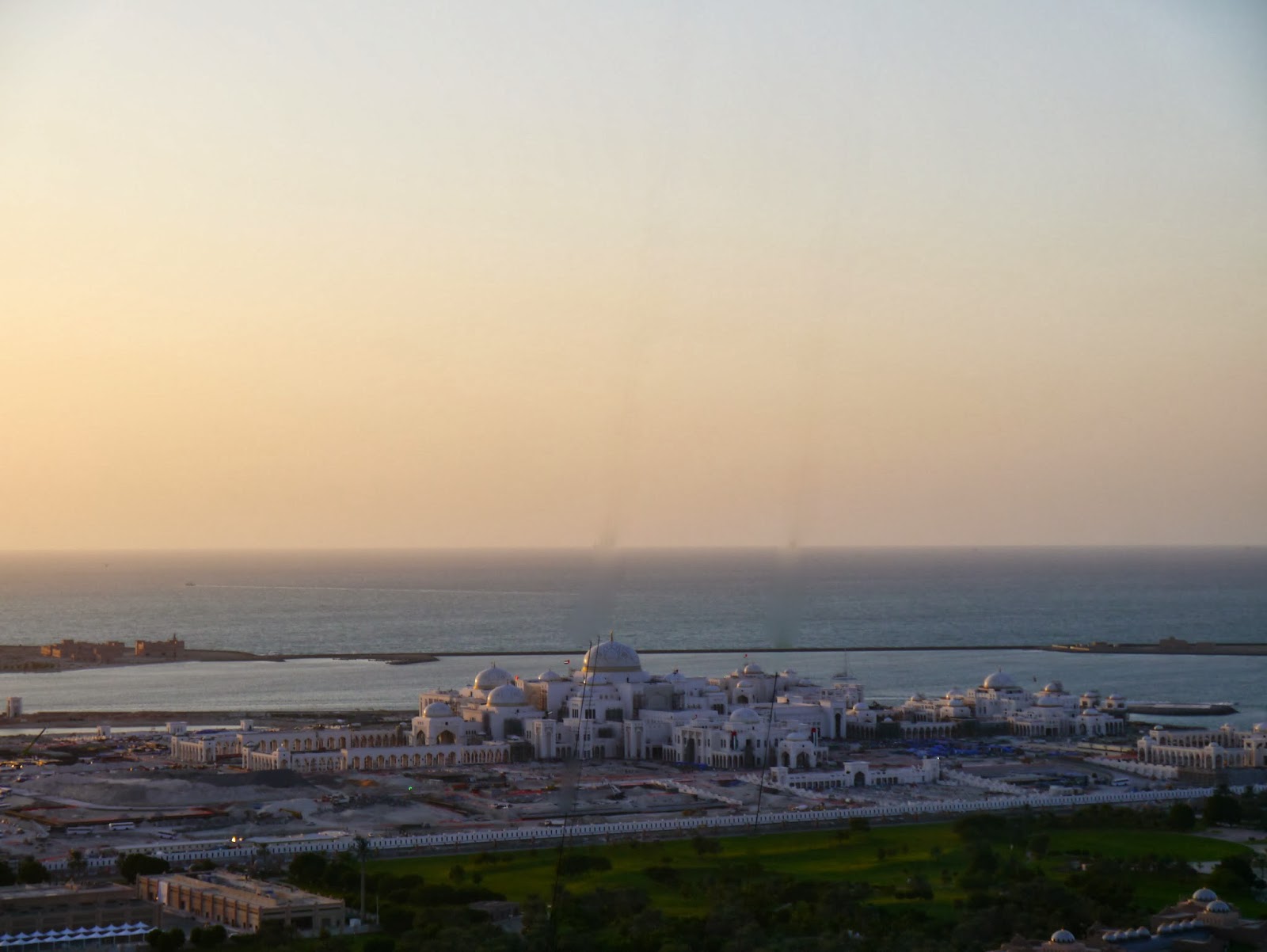 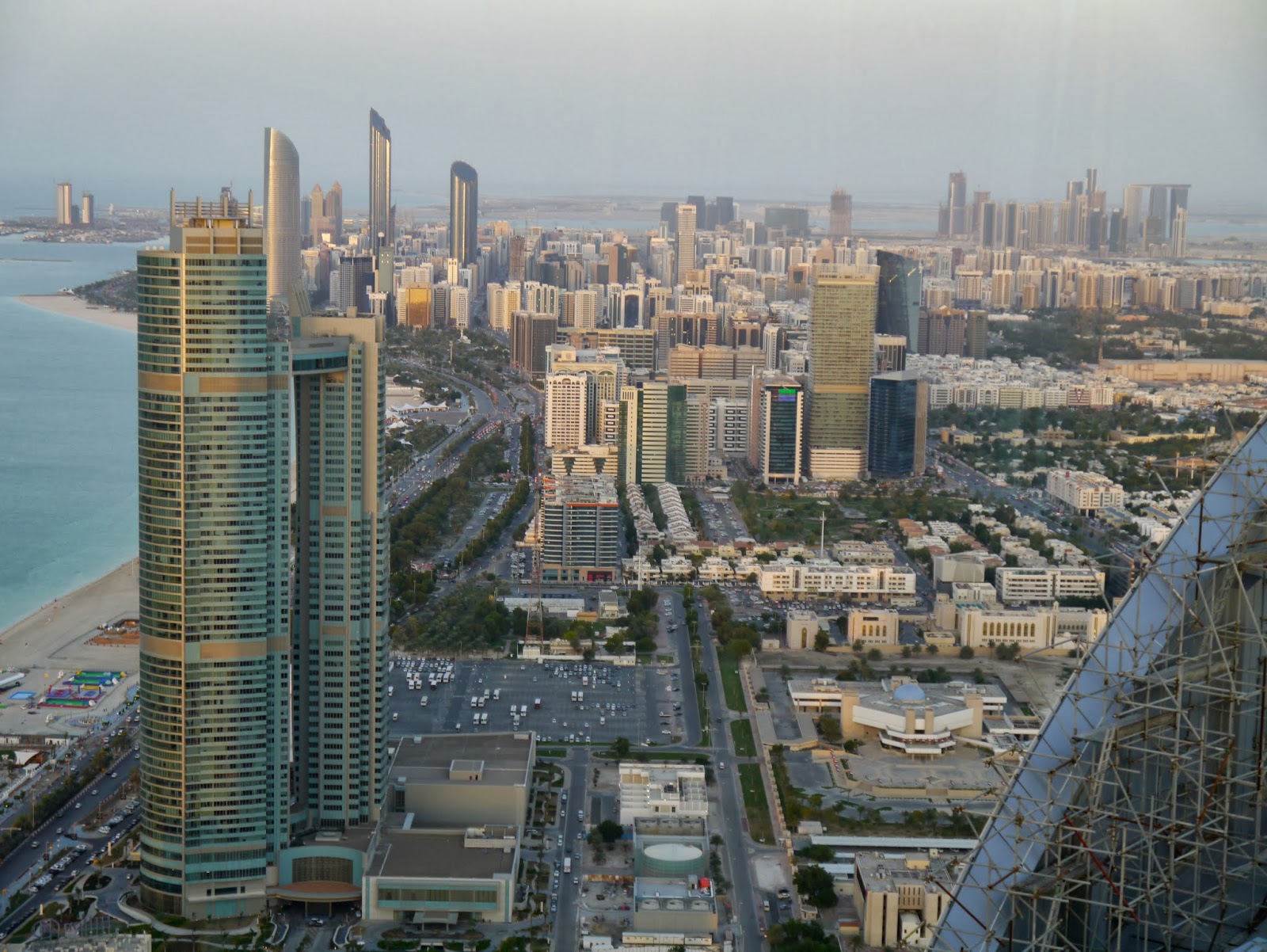 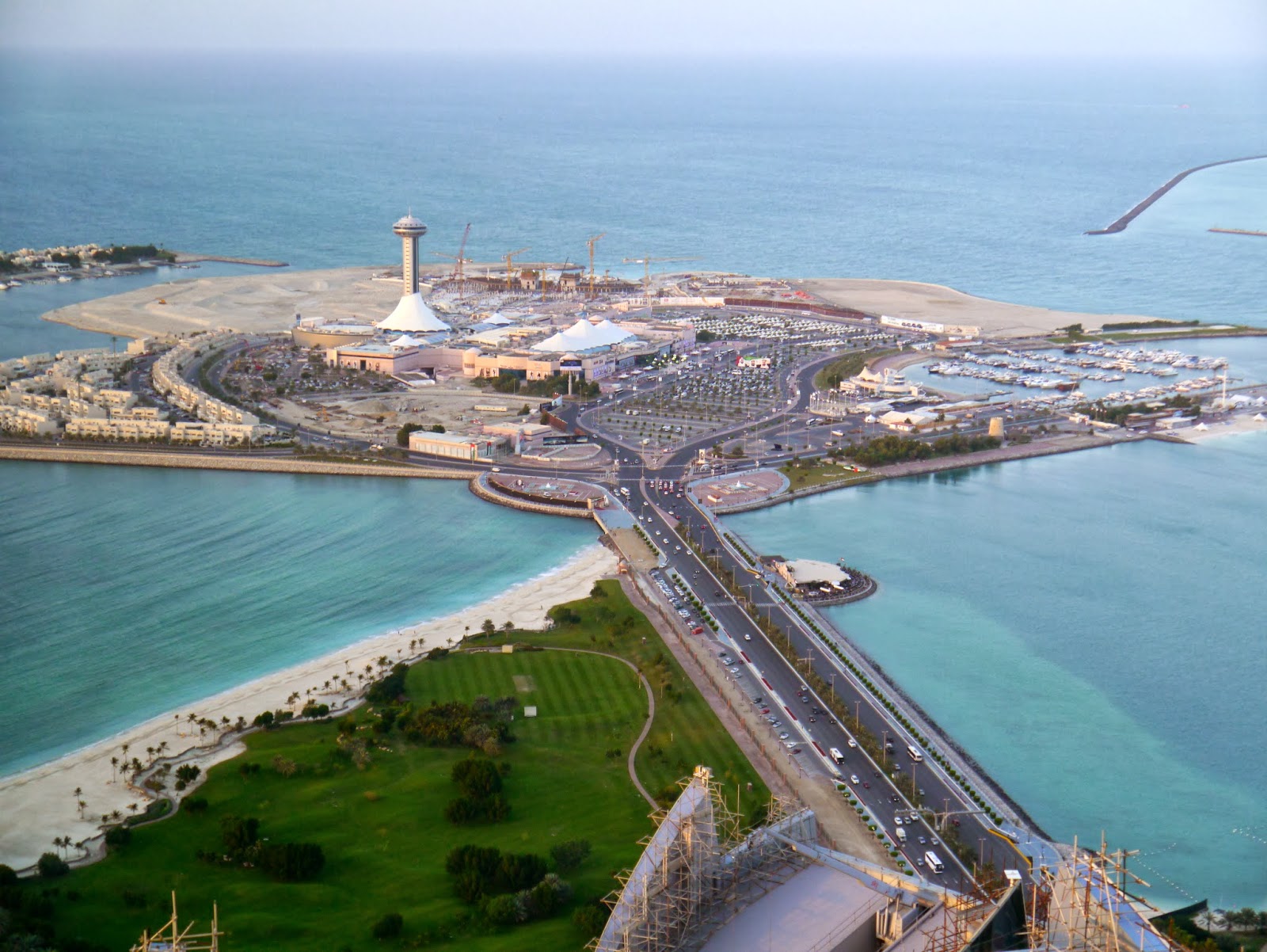 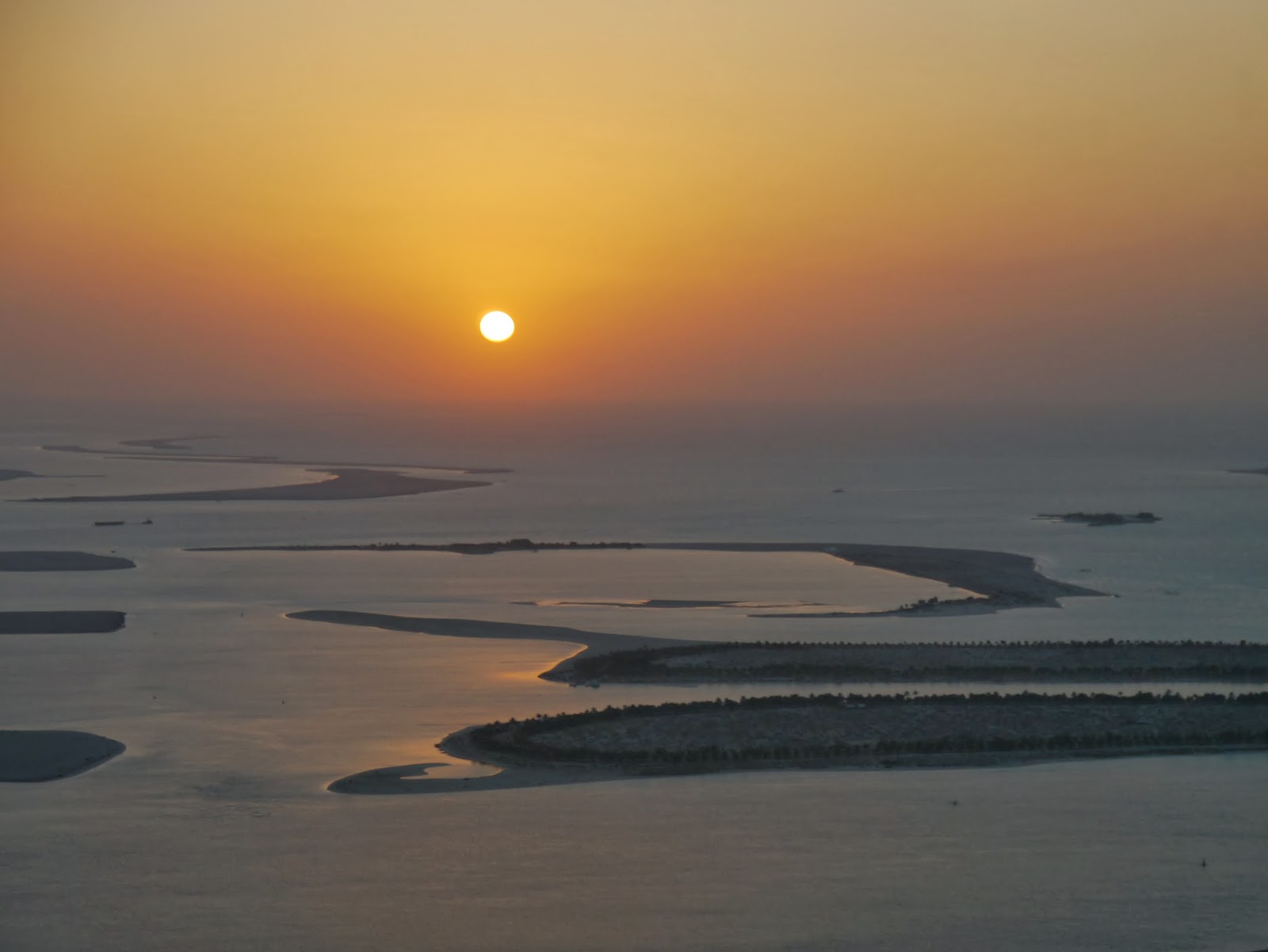 Posted by Annette Freeman at 4:44 AM